So my last blog detailed Gramma's Christmas Challege that she has given each of her grandkids. I think I've settled on what I'm going to do with her five dollars. This ended up being a harder decision than I originally thought it would be. I really wanted to do something meaningful with the money, but how do you make five dollars meaningful? And there are SO many worthy charities and causes. How do you decide which one is worth donating to?

Jim and I, on an unrelated note, had started to make a list of things we wanted to accomplish. Some were things we wanted to do this year, some this week, some in our lifetime. Some were things we've done in the past and want to start doing again. As Jim so aptly put it, "I don't believe in reincarnation so if there is something I want to accomplish, I'd better get started on it now." One of the things I had written on my side of the list was that I wanted to learn to knit or crochet. Often in the evenings, I have some time to myself and I feel like I should have something tangible to show for what I've done with my time. I could sit on the internet for hours on end, but I never feel like I've benefitted from one-on-one time with my PC.

After thinking about Gramma's challenge for a while, I decided to apply my interest in learning a skill to her desire for me to better the world. So I used her five dollars to buy yarn and a crochet needle.

I have a goal of two projects (hopefully more if I get good at this). The first will be a blanket that I will donate to Project Linus. Project Linus is a non-profit organization with a mission to provide a sense of security, warmth and comfort to children who are seriously ill, traumatized, or otherwise in need through the gifts of new, handmade blankets and afghans. When I read about this charity I thought about my Gramma right away since she has made blankets for decades AND she has more Charlie Brown books than anyone else I know. How perfect!

My second project will be a hat to donate to HeadHuggers. HeadHuggers is an organization that distributes handmade caps to hospitals, oncology offices and hospices so that they can more readily be available to those who have lost their hair due to chemotherapy. This project might take a little longer. I'm learning more about the style of hat needed so that the back of the person's neck is protected and also about types of material since many chemo patients are sensitive to wool.

Jim was sweet enough to buy me some extra yarn and knitting needles to further my project. I've watched several how-to videos online and have begun making a pink baby blanket for Project Linus. I've still got a long way to go, but so far I think it's coming along nicely! 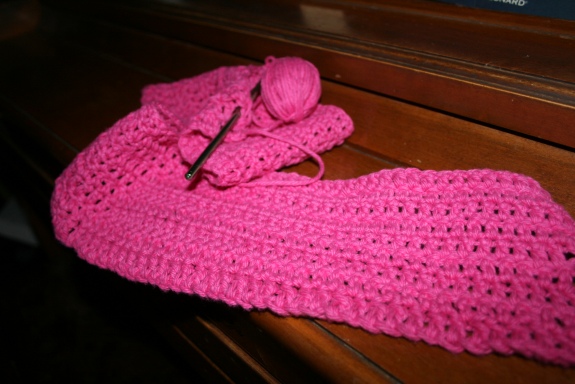 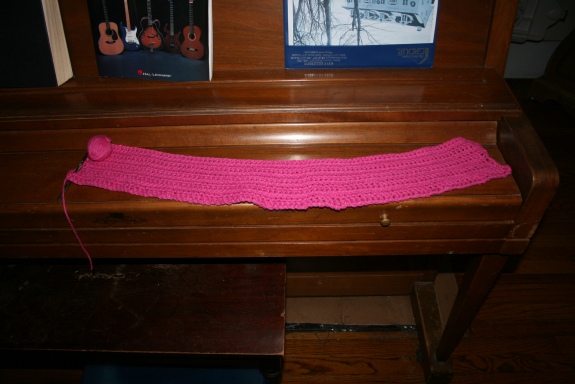 Very nice. And a gift that will keep on giving to others as you improve your skills. I think you achieved what she had in mind. I really think that is an awesome idea for a present/challenge. I tried both knitting and crochet and came away humbled. I apply too much tension. My blanket would look like a placemat. I found that counted cross-stitch was ideal for me but sadly computers took that away because my hands got damaged from all the keying. Keep up the good work--I think you have made a great start!!

That looks awesome, this was a great way to use your $5 - I am so impressed by your thoughtfulness. I love this idea. I have a friend that makes Tuck and Reagan a hat every year, there is nothing sweeter than hand made hats - and yours will be even better since they are going to such a great cause.

I think this ROCKS! Especially as the Aunt of a cancer survivor who is also a little girl who looked for something a little more stylish for her bald head. HA!!

I'm impressed that you are self taught! My Grandmother must have made hundreds of slippers and mitten, baby booties and sweaters that she gave away to those in need.