It's been a while since the last post. Been busy at work. Been harvesting oats for the past week, which has left little time for much else other than sleep.

Day 2 was an experiment. It was the first time I have ever grilled ribs. Been wanting to for a while, but on a graduate student salary more often ground beef or pork loin ends up on the grill.

I marinated the ribs in apple juice for just over 2 hours (I think apple cider would add more flavor, but apple juice is what I had). Then I patted them dry and put on English prime rib rub, which is a prepared rub from Penzeys spice company (penzeys.com). I've used this rub before on pork loin and pork tenderloin and like it a lot. However, you most certainly can use your favorite rub. There are a lot of recipes for rubs out there depending on your taste, and maybe soon I'll get adventurous enough to try and make my own.
After putting the rub on I sprinkled sesame seeds over them, wrapped them in foil and left them in the fridge for about 6 hours. 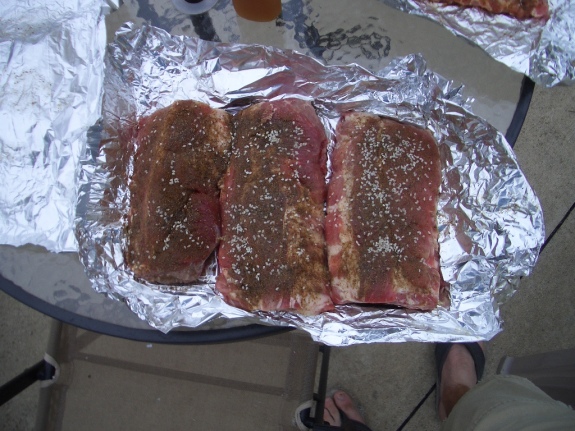 For ribs I prepared a single charcoal basket. About 30 min. after lighting the charcoal was ready and I pulled the basket over to one side of the grill. I placed a foil drip pan on the opposite side that also contained some water (this was to help keep the ribs moist). I also placed soaked wood chips over the coals.
I placed the ribs on the opposite side of the grate from the coals for indirect heat. 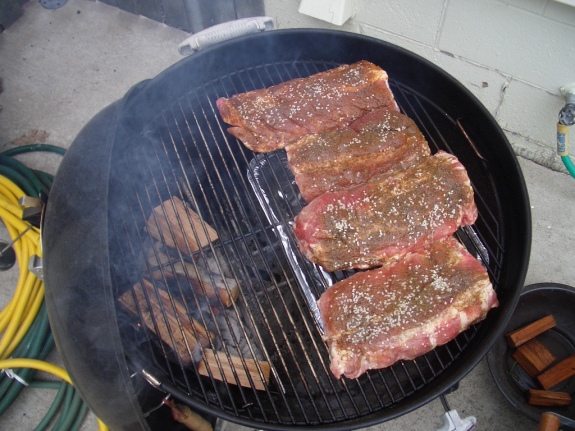 I also prepared some potatoes to cook as well. This was also the first time I've done potatoes on the grill. For presentation sake I cut them thinly, but not all the way through. I used a wooden handle from a spatula to ensure that I did not break through. I then basted them with melted butter and herbs (I used thyme and oregano, but use your favorite herbs. Fresh herbs would be even better!) 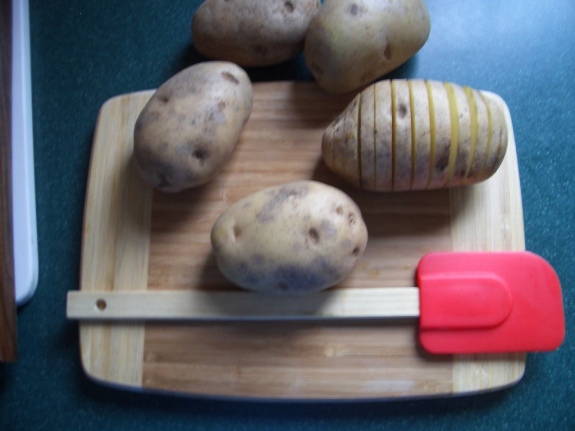 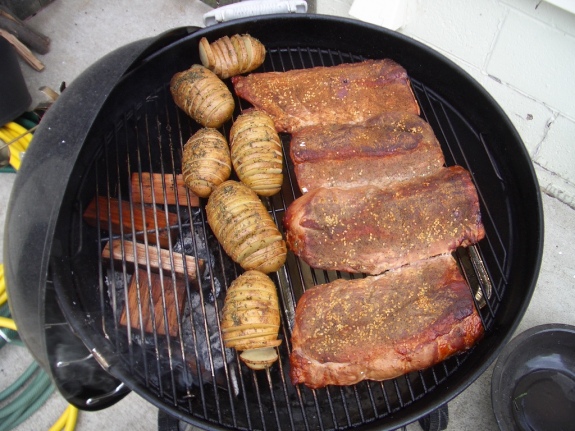 Every 20 min. I basted the ribs with apple juice to help keep the ribs from drying out. After an hour I added a few more coals and placed some new wood chips on as well.
After an hour and 40 min. of cooking I basted the ribs with barbeque sauce. Unfortunately, I used a brand name of bbq sauce rather than making my own, but I'm in the search for a good recipe. So if anyone has a recipe that they like to share I would love to try it out. 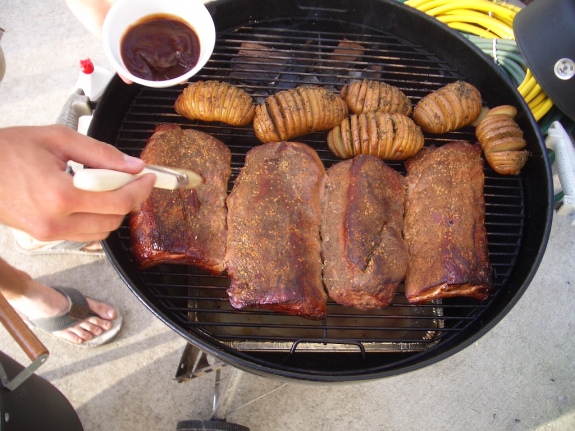 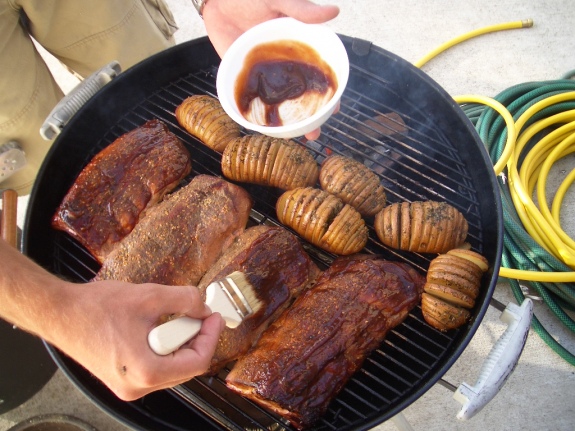 I pulled them off 20 min. after basting them with the bbq sauce and basted them one more time before serving. 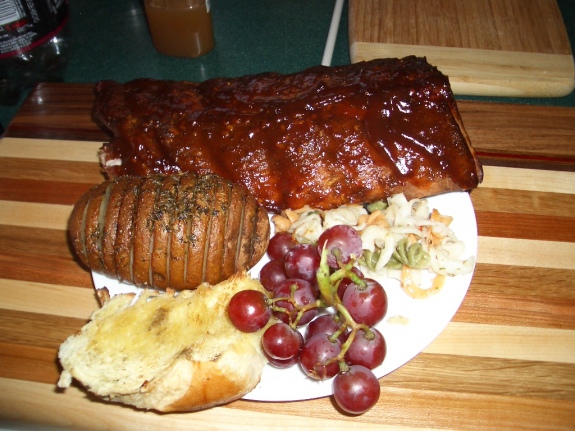 Well as is often the case in experiments things go wrong the first time. You make revisions and then repeat. I think thats the RE part of RE-Search. And this experiment was no different. So if I had to do over these are some changes I would make.
Ribs have a chewy membrane on the underside of them. I tried to remove this without much luck and I said "oh they'll be fine"....hmmm not really. The membrane was very chewy and made it almost impossible to tear the ribs apart. While the meat was tender and juicy and very good, the membrane made it not pleasant.

The other change I would make is regarding the potatoes. They turned out slightly undone (even after 2 hours on the grill), and the smoke flavor was a little intense. So my solution would be to cook the potatoes in the oven for 45 min to an hour and then place them on the grill for 30 min. to an hour to obtain some of the smoke flavor. Cooking them in the oven at like 425 degrees would ensure they were cooked through.

So, Day 2 was not a complete failure, well mostly because I don't fail... I just succeed at finding things that don't work.
The ribs were tender and juicy but that membrane ruined the day. The articles I read made it look easy to pull the membrane off, but after 30 min of trying I gave up. I should not have given up so easy and it would have turned out better. Oh well, we learn from our mistakes.

Day 3 is coming soon. I may try making a pizza on the grill. Slightly unorthodox, but its the 30 days of weber so why not give it a shot?

Wow! This just looks SO good! I'm gonna have to convince my husband to do at least 10 days of Weber. I'm drooling at these photos.

Ames   Monday, July 20, 2009
My parents make pizza on the grill a lot and it is always really really good! Use provel cheese when you try it!

Looks wonderful!. Yeah, I didn't know about the membrane the first time I did ribs too but I have not forgotten since then. It can be a little tough to remove, but well worth the effort!

As for the potatoes, I usually just par-boil mine for a short time and then put them on the grill. By par-boiling, I don't have to turn on the oven at all.

I have also added garlic and/or minced onions to this - a little bit of yellow mustard or dry mustard also adds just a little tang to it. Tabasco is a good addition if you want a little spice - or some creole/cajun seasoning.

It is a good base sauce to play with - you can substitute orange juice for the lemon for pork or chicken too.

What happened to the rest of the sentence?

"Been wanting to for a while, but on a graduate student salary more often ground beef or pork loin ends up on the grill."

Except when I can get home and take food from the freezer.