So day 3 took weber a little out of his comfort zone. Do you like my very original name I have for my grill? "weber" wonder how I came up with that? ... I never said creativity was my strength. Anyway, for day 3, I made a homemade pizza on the grill. To me this seemed a little unconventional, however, I discovered its quite a common thing.

I prepared the sauce the previous night. Honestly, I do not have a set recipe for the sauce. I use a large can of diced tomatoes and I also add basil, oregano, thyme, fennel seed, a little bit of dry mustard, and salt and pepper. Do not be shy when adding the italian herbs, make the sauce have some zip. I let the sauce simmer for at least 3 hours, to let the tomatoes cook down. Fresh tomatoes from a garden or farmer's market would make an even better sauce, however, they are not quite in season yet here. Also, this is not exactly the most extravagant sauce. That's the beauty about pizza, there are probably 1001 combinations of sauces, toppings, cheese, and crust. A lot of room for personal creativity.

The next day comes the crust. This crust recipe is one that my mom has used for some time. I think it can make the difference between a good pizza and a mediocre pizza.
Ingredients:
1 package of dry yeast
1 C of water
1 tsp. salt
3-3 1/2 cups of flour
2 tsp. sugar
2 TBL. Olive Oil

Dissolve the yeast in water, then add the rest of the ingredients. This is where a kitchen aid mixer would be very handy. Unfortunately, I do not have one (*cough* cough* maybe a good christmas present mom?) Mix the ingredients and knead the dough with your hands or a mixer. Let the dough rise an hour, then punch it down and let rise another 20 minutes.

I spread the dough out on a pizza pan. It's up to you on how thick you want the crust, but for grilling purposes do not make it too thin or it will be hard to flip on the grill. 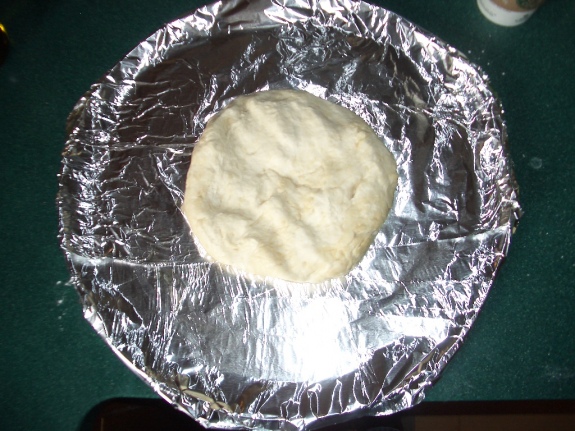 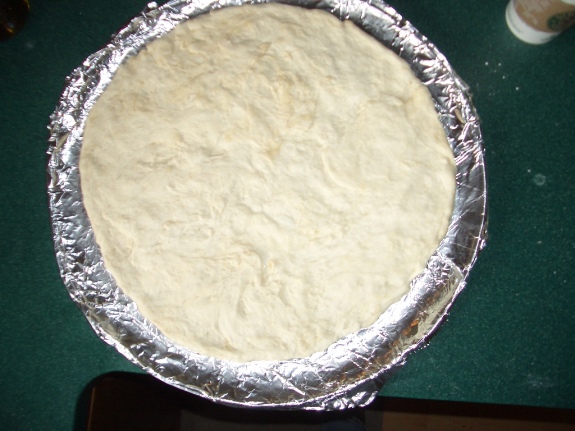 To prepare the grill I used two full charcoal baskets, again it takes about 30 min. for the briquettes to be grayed over. I wanted indirect heat so I pulled the baskets to opposite ends of the grill. Placed the well oiled grate. I think making the grate well oiled is important to make sure the crust does not stick.

I put the crust on the grill and covered it and let it cook for about 3 minutes. Check the crust and see if the under side is golden brown. If so, flip it. I broke a little piece of the crust when I flipped it, but it was not catastrophic. 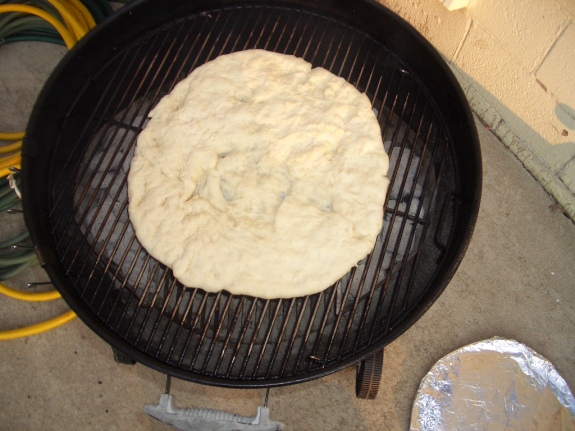 At this point it is a mad dash to get all the toppings on, cover the grill, and make sure the toppings have enough time to warm up before the crust burns. So frantically, I spread the sauce out, placed the italian sausage I had previously cooked, and threw on the cheese. I skimped a little on the variety of toppings. Personally, the more things on my pizza the better it is. I like onion, peppers.... anything but anchovies. Mix it up, personalize it, have fun with it!
Cook it covered for about 10 minutes. It is just a delicate balance between getting the toppings heated, cheese melted, without the crust burning. 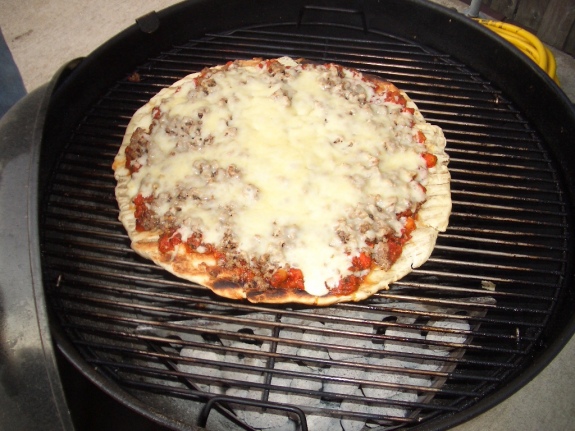 Time to pull it off the grill! It was this point where I slightly mutilated the pizza. It was difficult to slide the pizza onto a pan. The bigger the spatula you have the better it would be. The weight of the toppings on the crust made it difficult to lift the pizza and slide it. I thought about this later and a possibly solution would be to cook both sides of the crust, pull it off place it on a pan, add toppings then place the pizza and the pan on the grill to heat the toppings. If any one else has some suggestions or solutions for this it would be welcome. 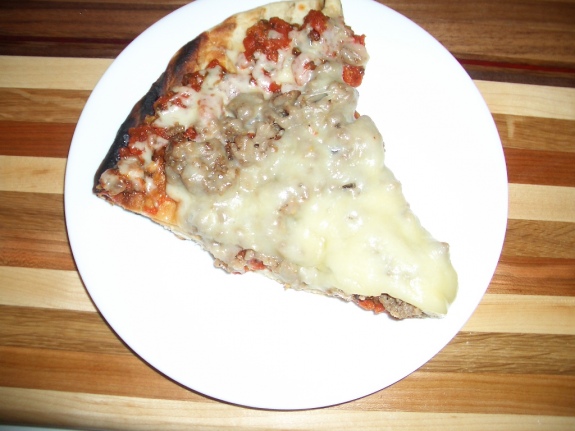 This was certainly a success and I will definitely be doing this again. The grill added a delicious flavor that cooking the pizza in the oven just does not give you. This is great when you do not want to heat up the house in the summer by turning on the oven, or just for those of us who are grilling fanatics.

An additional twist that also may help with the difficulty of removing the pizza after cooking is to create smaller personal pizzas. This would be fun if you had guests over so each individual could create their own pizza. This would also solve the other problem that I encountered. Since I made a single large pizza, the portions of the crust that overlapped the coals burned slightly. With smaller personal pizzas they could be placed on the grill so that they would not be directly over the coals, preventing the burning of the crust.

Weber handled this spectacularly and I look forward to doing this again. Definitely will be added to the repertoire.

Great job! This looks and sounds delicious and I think it would definitely be worth a try! Thanks for all your tips.