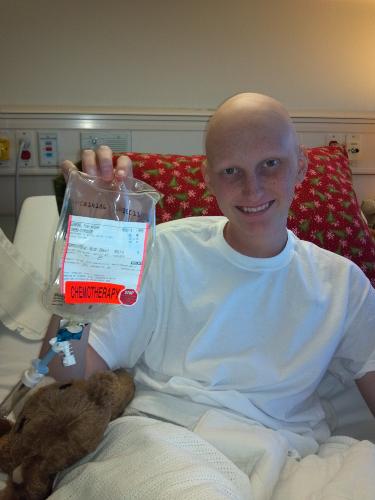 Update on my other hero... Evan. This is a pic from November proudly displaying his last bag of poison that raged through his veins 3 weeks per month for 8 months... Except for a one month "reprieve", during which he had most of his tibia removed just above the ankle to just below his knee... replaced with a cadaver tibia along with many plates and screws. He had a cancerous tumor that had eaten away a 4" long portion of his tibia.

He has been diagnosed as cancer free now. Has been on crutches now for several weeks and is going through intensive PT and tendon surgeries in attempt to hopefully walk again...

He is indeed a hero. My heart goes out to him. Brave boy.

God bless him. I have a feeling he's going to make a remarkable recovery!!!