Related Content
Someone's gotta do it.
Save our Parks
Party Reminder

Yes, yes, I know I am late in the game, both in starting a blog and in giving my 2008 election predictions. Thems the breaks. I think I've finally sat on the side lines long enough to put in my two cents and tell it like I see it. Anyone who knows me, knows that I enjoy my politics. I owe a lot of it to my step dad who was a political science professor, worked under Illinois' longest serving Governor, "Big Jim" Thompson, and loved to discuss the virtues of bureaucracy. It was his guidance that helped me land a class president seat back in '97. It was a class of only 19 students, but none the less.

Let's begin with the Democratic primary. Obama definitely has the delegates to earn the nomination. Hillary Clinton is the only one left to see this. Whether the Florida and Michigan delegates are seated is a moot point. One side has exercised a well spoken and cordial campaign, the other side has not. This is going to drive the less cordial campaign to self-destruct.

On the Republican side I'd like to see my main man, Ron Paul take the nomination from the GOP, but without a major moral trip up or failed coronary bi-pass on the McCain side it does look "difficult." If Paul won all of the remaining contests, he would still need to win over 50% of the delegates already awarded. I may need to come back and check my math on this.

Finally the moment we've all been waiting for will come in November - The time when the stupid campaign commercials start to trickle off. It will be time to pick a new President and I say, "President Nixon - Now More Than Ever!" I've checked over the prerequisites for becoming President from an 8th grade constitution test.
A candidate must be a natural-born citizen, 14 year resident, and 35 years old. Nowhere does it say, "Must be alive." I think Nixon has had plenty of time to think about the mistakes of his last presidency and his time has come. 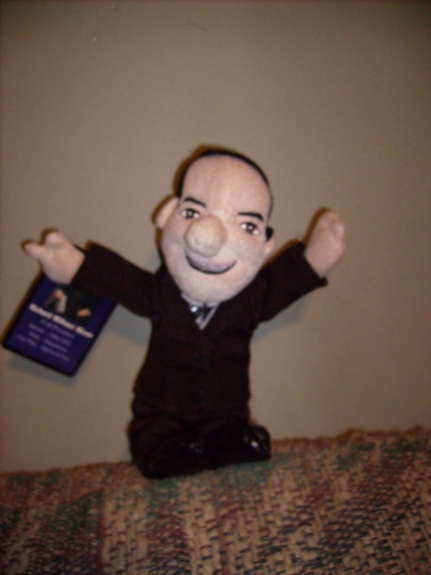 It looks more like he is flipping "the bird" than he is giving the peace sign. But I am so for it, Now more than ever.
Watching the discussion on the primaries today, I have seen some ugly stuff coming out of the Clinton campaign, and it is not just Hillary's face! Obama has a much more dignified and classy campaign than any candidate I have seen in years. (Besides Ron Paul, luv ya, hun)

Great way to start off the blog dude. I must say I'm surprised though - I thought for sure you would have chose Ross Perot over Nixon, hands down. I myself am campaigning for Thomas Edison. Why, you ask? Mostly because every time I hear that dude's name, I'm all "which President was he - 2nd or 3rd?" And I'm tired of being told that in fact he was never even President.

So let's turn this campaign around. I say let Edison turn the lights on in America, and usher in a new realm of creative leadership not seen since our nation's great 4th President, Susan B. Anthony.

I thought so too, but I heard Edison invented the electric chair. That could really kill his chances.

Sorry to the pun police.

Dave, you and Denny have truly created something special. Joe and I are in the same room, (each on our own mac laptops) and conversing over Humzoo!

The Wright Brothers... because two presidents are better than one.

Glad you like it K8Day. Anytime you need me to drive an electronic wedge in the middle of your marriage, just let me know. It's what I'm here for.

Courtney and I have spent a lot of time communicating electronically while in the same house, and many times when in the same room.

While I like to take credit where credit is partially due, I must tip my hat to the great founder of the internet, Mr. Thomas Edison. Without his light bulbs, record players and portable walkmans (walkmen?), we would never have entered the electronic revolution that has become our nation's greatest achievement in the 17th century. No more nights of being tarred and feathered for pure entertainment. Now we can call up YouTube, and we can see other poor souls from around the world being tarred and feathered in live, real-time streaming picture tubes. It's a fascinating world out there.

Wow Dave, you really are pushing Thomas Edison. But I must say, Ben Franklin may give Edison a run for his money. Joe and I also use our iPhones to communicate even though we are in the same room.

Dude, you're right - Franklin is another one of those dudes who I'm totally sure was President. I am hereby and officially supporting the ticket of Franklin/Edison for 2008.

Does anyone know who the other 11 famous presidents would be? I'm pretty sure the same claw game had a Lincoln and George W. beanbag doll. That leaves 9 unaccounted for.