It seems some including the governor himself have a skewed perception of "the rules" in the current impeachment proceedings. Rod Blagojevich has recently appeared on Good Morning America, The View, and in an interview with Geraldo Rivera touting how unfair this whole thing has become. He says, "They have denied me my right to call witnesses."
Alright, Blago, you're the lawyer. Let me just read from the rulebook. 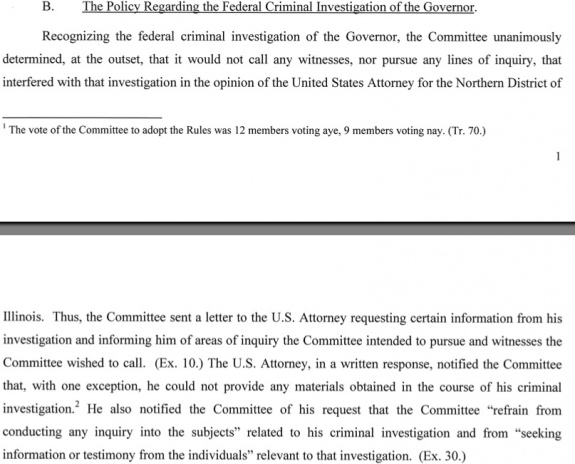 If a witness is denied, it is denied to both sides, not just the defense. The governor chose not to involve himself in these proceedings. It is for this reason only that he cannot call witnesses, not because the legislators in Springfield denied him of any rights.

Oh, and ask him again for his Nixon impersonation, it's priceless!

Ok, I understand that neither side is able to call witnesses that are part of the criminal proceedings. That seems fair as it stands.

However, here is the problem I have: (And I am not defending Blago at all. I want him out but I want it to be fair.)

1. Clearly his arrest was the catalyst for his impeachment and the majority of Illinois citizens are for his conviction at the impeachment trial because of his arrest on solicitation of Obama's senate seat. I think he should be able to put up a proper defense of those charges. In order to do so, he may need to call witnesses such as Jackson, Emanual, and Jarret.

1a) I have a real problem with a federal investigation trumping a states rights issues, especially when it comes to a states executive office

2. Now, I have not read the impeachment documents. I am assuming that some of the articles of impeachment have to do with the events surrounding his arrest. If this is true, and it may not be, then I think he is getting a raw deal. Of course, I believe that he should be found guilty on other issues alone.

As I read it there are 16 separate accusations that he is facing. Most certainly his arrest and the charge that he tried to sell the Senate seat brought about this impeachment, but there are 15 other accusations showing a pattern of abuse of authority. To address 1a), I will use a Law & Order analogy. Say a defendant is facing grand larceny charges as well as jaywalking. The jaywalking trial could be allowed to proceed, but shouldn't interfere with the greater charges.

Blagojevich is getting an awesome deal with this impeachment trial. I would think it great if an employer of mine had to go through the same process to fire me. This proceeding is merely about one man's job and its effect on the citizens of Illinois.

I believe that the legislators have tried to make this as "by-the-book" as possible. The governor has had many opportunities to object to the rules, but has decided to take his campaign to the national media instead.

Also, if interested, here is the report in full.
http://www.pantagraph.com/art/2009/01/impeachmentreport...

Thanks for researching this. Although he may be guilty of the 15 other charges, the primary charge would be the selling of the senate seat; wouldnt you agree?

And thus I still go back to say that the states rights should trump the federal rights in this case. Plus I want to see how in the heck he would defend himself against those tapes.

Rick,
I do agree. Before he was accused of this there was no action being taken against him. During questions in the State Senate yesterday it was further clarified that all of these accusations are being lumped into a single article of impeachment to show a "pattern of abuse of power."

It could be worse, we could have to wait for the federal trial to finish before removing him from office. That's close to what Geraldo was suggesting.

I totally agree with you, Joe. This is not a criminal trial, this is a trial to see if there is enough evidence that Blago should be ousted for poor job performance. He's not going to jail over this trial.

if he wasnt such a spoiled, whiney baby this whole thing would be easier, ive seen several interviews and he just repeats the same thing over and over about not being allowed his constitutional rights yadda yadda..

Ive heard him say several times that he's 'been elected by the people twice now" but yet he ignores his approval rating of like 7%.

From Anderson Cooper 360's Lisa Bloom:
"...he’s using the petulant child approach: 'I’m going to take my marbles and go home!' Not showing up is the worst possible legal strategy.

Had he made the proper motion and argued that the Senate is trampling his rights, he might have garnered the right to call any and all witnesses he chose. Instead, he complains to non-lawyers like the ladies of The View that he can’t call witnesses, hoping no one will catch him.

Blago, you’re busted. You’re misstating the law. I’d stick up for the due process rights of even the most despised amongst us, even you, accused of withholding money for a children’s hospital and trying to sell Obama’s senate seat. But don’t make up phony claims. As the late Senator Daniel Patrick Moynihan said, 'you’re entitled to your own opinion, but you’re not entitled to your own facts.' "