We have always needed a little extra space, but we didn't want to buy bedroom furniture. So the the t-shirts went from being folded in the drawers to being hung, and our old ice chest style nightstands soon became storage for jammies and undershirts. Yet, over the last couple of years we have outgrown our mere 5-drawer chest, closet, and nightstands.

When I was in the hospital, 4 wks ago, Richie washed all the laundry but folded none of it. Over the last month clothes have piled up in the floor. I'm ashamed to what extent this became a problem for us. A couple weeks ago while cleaning I discovered a tub; it had clothes in it, clothes I'd not been able to fit into in almost 2 years. I sorted through what I wanted to unpack (because most of them fit now) and began doing laundry. Last week I washed all our dirty laundry, including the new additions. I spent 5-6 hours one day simply folding and hanging laundry. I had to quit when I ran out of hangers and drawer space. I was still left with several loads that needed to be dealt with. I bought some hangers, but still lacked the room I really needed. Whereas in the past I was always able to manage fine with our space and find a way to make it all fit, I was completely unable to do anything with remaining loads of laundry. After much deliberation we decided to give in and buy the furniture we have grown to love from IKEA.

This weekend we bought the furniture we've loved for the last 3 years and got it all put together! Woot!! 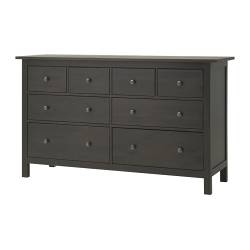 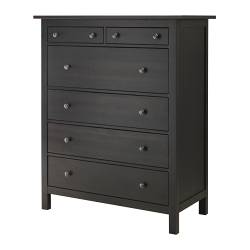 I cleaned out the sitting room; Richie and I moved his old chest out. We got this stuff moved in, and replaced our old ice chest nightstands with Hemnes nightstands as well. Now I have to get all the clothes transferred, t-shirts unhung and folded, and every other piece of clothing sorted, folded and put away.

There are lots of other "to do's" on my list while Richie is out of town. I need to get the spare room rearranged, the master put back together, the cardboard and papers taken to the recycling bin, among some other secret plans that will only be announced later. I have a super busy week ahead of me, lots of surprises!!

Good luck! We are going to have to do the same thing soon.

Have a good day!

i like those dressers too, and will probally end up buying one for Tucker's big boy room when he moves in a year or so!
Don't worry there is always laundry piled up needing to be folded at our house in the laundry room!

We are out of space too. About the laundry... I have a set of sheets and a load of darks waiting on the couch to be folded. There is also a load of whites still in the dryer and I have more laundry to do. It never gets completely finished. It's a never ending cycle.

I love that furniture!
I can't wait to be able to do this. We've been living in a tiny upstairs bedroom for 6 months or more while we've been remodeling the master suite. We currently have one tiny dresser and one little closet. And 2 clothes baskets that most clean things get folded and stacked in. It'll be nice once we can buy our new bedroom furniture and then have the walk-in closet. I won't know what to do with all the space!
Our laundry piles up too. I currently have a set of sheets that got washed over the weekend, unfolded, in a basket on top the dryer. Clean whites in the dryer from a day ago, and I threw another load into the washer before I left for work. It's never-ending at our house too.

Snelly, we are pretty much in the same boat. We are in a small bedroom with hopes of finishing our master soon. We have two dressers that we bought about 4 years ago that are slowly falling apart. We also have a large Ikea wardrobe that is also falling apart. Good Times! Looking forward to a new walk in closet. We have what I refer to as the "Laundry Monster" that lives in the corner of the bedroom. It drives me nuts but because our storage is all busted...we can't do much about it.

Spike, I think we have your monster's twin! It started out small, just a place to store clothes that were out of season. Then it became easier just to throw the clean clothes (folded at least) on top of everything else. Then somehow another laundry basket appeared at some time and its now also full of clean clothes. I'm glad to hear that we aren't the only ones taking our sweet time working on the master bedroom.

we like the look of this stuff. I'm glad to read that we are not the only ones afflicted with laundry monsters. I did take before photos that I'll post afterwards. I'll be super ashamed but will do it nonetheless.

I abhor bedroom furniture--well, except for the bed, of course. And after spending approximately $300 apiece on each of our three bedroom closets, no dressers are necessary in any of our bedrooms, thus giving us all much needed space to move around. This is good because Gwendolyn's room is tiny at 9 x 10, Galvin's is a tad bigger at 9 x 12 and ours is 12 x 15 with a king-sized bed! We also have my hope chest at the end of that bed + a computer desk taking up space in there, too!! One day, we'll actually have our in-home studio/office on the lower level 100% completed, so we can get that monstrosity OUT of our bedroom! Once it's gone, I'd like a small, tasteful chair/ottoman combo in there combined with my antique floor lamp for a simple reading space.

Sorry Ashley! You could probably blame it on me because I put a lot of it together.

Confession: Sometimes I cover the laundry monster with a sheet when there are guests over.

I've never had bedroom furniture other than growing up and hand-me-downs. I hope to get some for this bedroom. Space is no issue--I could put a queen bed (probably a king without nightstands) and 3 pieces at least if not more if I really needed them but I don't. I'd like something that is a bit old-fashioned but not all curlicues and that looks substantial without being heavy-handed. I'm not really modern but not really country-style or too dressy. I like clean lines but less modern than IKEA. Hope it lasts for years and you really enjoy all that storage!!

I've done a bit of my "to do" list. I feel like I've done nothing and it looks like it too. Things have been such a mess. The more I think about it the more it just brings me down. So I'm off to continue my project.