I was listening to America's Doctor, Dr. Dean Edell, on my shower radio this morning. He was discussing a report about bras that said women shouldn't wear the same bra two days in a row and that after 90 days the bra was DOA. After 90 days, I consider my bra just getting broken in. And I've never considered bras in the same category as socks and underwear, things that I'll wear only once before washing. Bras are more like jeans, which get washed only when they begin to get crunchy. Am I doing it wrong? 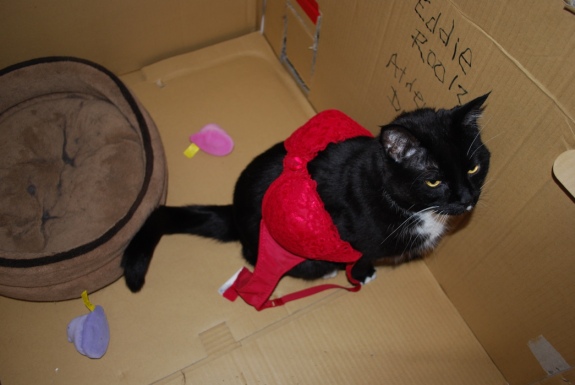 Sally, I'm with you. If wearing a bra two days in a row is wrong... I don't wanna be right.

I think Dr. Dean Edell was smoking crack today. Let's hear from Mrs. Dean Edell if she isn't at Victorias Secret buying more bras. What was his reasoning?

Haha, I bet Dr. Dean is getting paid under the table from Playtex or Victoria's Secret. I think he said you had to get rid of a bra after 90 days because it lost its support or something. He said you shouldn't wear the same bra 2 days in a row because you transferred fibers with it, which could irritate your skin. But I'm pretty sure if that were the case, you'd be living in a bubble already.

More than likely Dr. Dean doesn't know a bra from a jock strap and I don't give up my fav until the wire is poking me in the arm pit or all the elastic is sticking out in little wisps. I have 2 favs-one to wash and one to wear and since I don't want to wear them out in the laundry I try to get by without washing them more than every couple of days unless its summer and I have no choice do to excess moisture production:>

I have bras that qualify as relics. I am expecting to hear from the Smithsonian any day now.

BTW...Because of my profession my husband calls me a "Boobologist" and this Boobologist says Dr. D. is a boob.

I am worried that Eddie may have sexual identity issues with that bra on his back.

Oh, I'm totally screwed. I have four bras that are at least a decade old, two nursing bras that I've worn through almost two children now and the ol' standby Playtex Cross Your Heart that could hitchhike to the coast, if necessary. Gimme a break!

I've heard that about bras but only in the sense that they need a day to return to their previous shape. So, you just gotta rotate, not wash every time. You know...unless you got all nasty sweaty or something.

Obviously Dr. Edell does not know how expensive most bras can be (especially the good ones). If you find a person that wears a different bra each day please let me know. That same person also probably has matching underwear for each bra; and people that have matching sets each day truly amaze me.

Ok its time for a guy's perspective on this matter. Bras are out, seriously they are so yesterday. You women need to stop complaining about not having enough bras to wear and just stop wearing them all together. I agree, they are overpriced and totally overrated. Buy a Wii or something with that left over money.

Its time you stand up and say no to Dr. Edell and his Pro-Bra Pattywagon. No panties either, lets draw the line on that one too. Enough is enough. We men are tired of them all.

Denny, you said panties. I hate when you say panties.

As my dad just pointed out, the only things differentiating us from wild animals are bras and panties. Without those, we'd still be eating uncooked squirrels living in caves and watching Full House.

What is wrong with the word panties? The word "underwear" is so boring. Hurray for panties! Let's bring'em back. Wait, now I am against my pro-anti-panty-raid from earlier, dang. I am confused.

Ewwwwwwwwwwwww...I thought the title of this post would natrually repel the male members of my family. And my Dad and brother used the word "panties." I'm going to need years of therapy for this. Niki, I'm with you- panties is one of those words that sounds to my ears like fingers on a chalkboard. Same goes for "loins" and "compassionate conservatism."

For the uninformed,a few reasons that we females have to wear bras:
Quote from Granny Zimmerman age 106, as I was bathing her,"my upstairs fell downstairs."
From my birthday card, "do your boobs hang low, do they wobble to and fro?"
Quote from woman's magazine,"you should only go without a bra if you can't hold a pencil under your breast" (I'm in big trouble-3 children and almost 60 yers of gravity , the girls can hold a pencil, pad and gum eraser without effort
Walking quickly causes so much swing that I loose my balance. Not a pretty sight.

dannie   Monday, April 7, 2008
I'm just pretty sure this isn't a conversation I wanted to watch my wife have in public.

*changes panties on a lunar cycle*