So last time I wrote, my Dad and I were drifting in a lifeboat somewhere in the Atlantic after our cruise ship capsized. I'm happy to report that we made it safely home. I won't bore you with the details of our rescue, but it involved Captain Sully, a lock of Mitt Romeny's hair, and two hundred crates of ShamWow.

School starts back in just over month, the thought of which induces waves of nausea. The 400+ books I am supposed to be reading this summer mock me with every mote of dust they collect. But apart from ruining any hope for a professional career, this summer has been wonderful.

Seriously, who looks this good after giving birth? 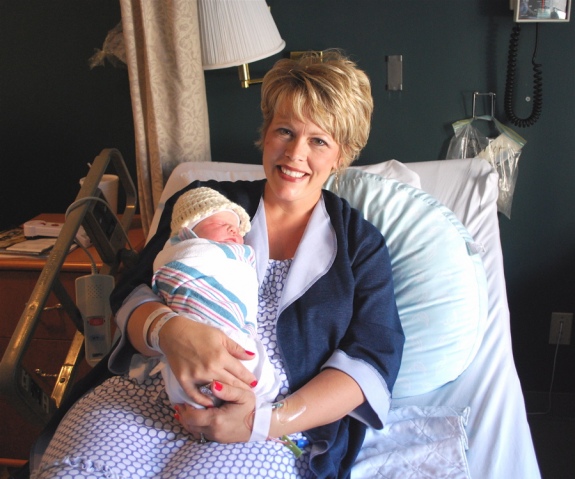 Grandma Claudia has finally been rewarded with a girl after raising three sons of her own. 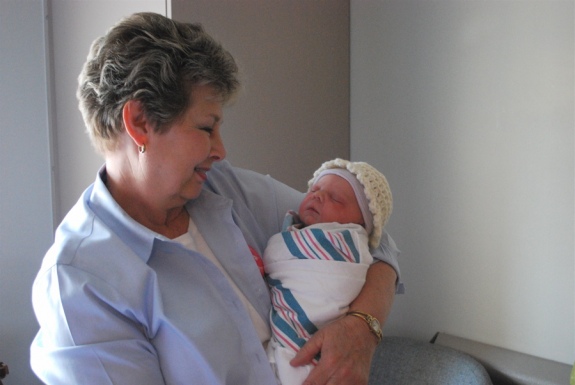 In less awwww-inspiring news, I revived my candlestick business after 4 years of collecting rust. I work mainly with plumbing parts and pipe fittings. While I would love to make enough money to buy all my cats gold-encrusted food dishes, the real joy of it comes from working with my hands and creating a physical object. It's a pleasant change from sitting in a seminar class and debating the finer points of whether or not the South had a constitutional right to secede from the Union.

A couple weeks ago I took part in the Sugar Creek Arts Festival in Normal, IL. 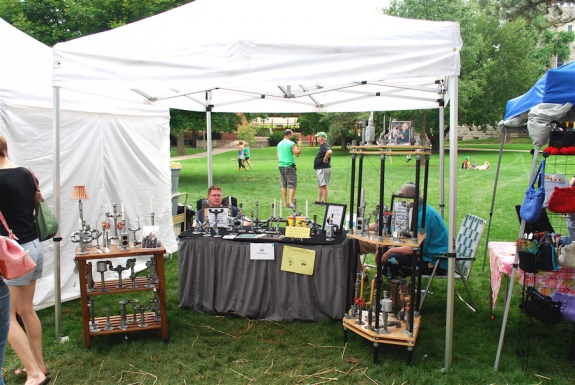 After repeatedly telling people I don't have an online store because I think the internet is just a passing fad, I finally broke down and started one on Etsy.
imasallypants.etsy.com

In church-home news, we had a pleasant surprise visit from a former pastor's son who was passing through Illinois on his way home to North Carolina. His father preached here in the late 1950s to mid-1960s. He was nice enough to email me some pictures he had from that time period. 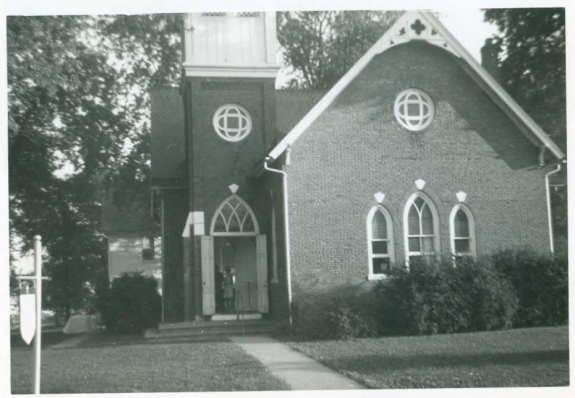 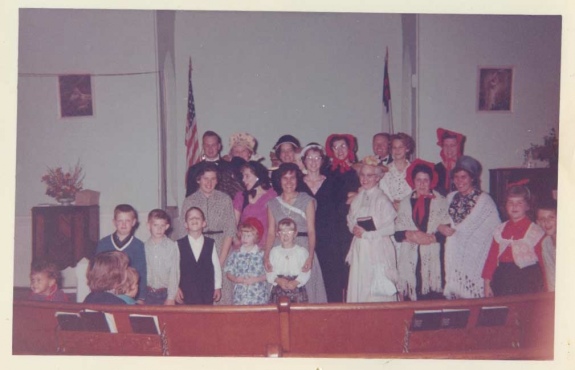 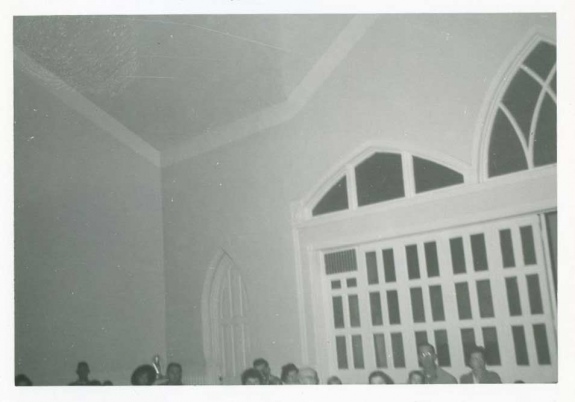 This past Saturday Andrew and I stopped by the Old House Society's architectural salvage warehouse in Bloomington JUST TO BROWSE and visit with the friendly volunteers there. Before going in, we made a pact not to buy anything that we would like to have "down the road" because 1.) we've abused that mentality enough and 2.) right now our focus needs to be on getting the building in shape so that one day we'll have a finished space for that stuff. But our resolve is about as strong as a crack addict who is left alone in the DEA's evidence room, and we came home with this little gem. 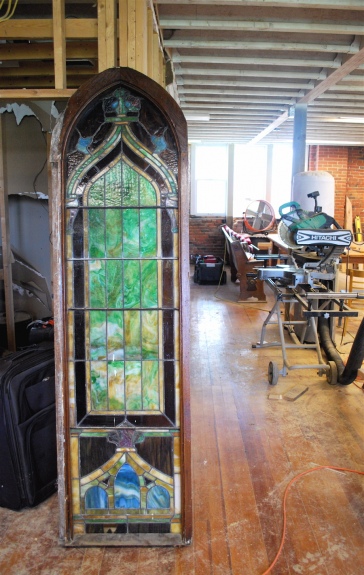 Andrew's been building a harvest table out of reclaimed lumber and is almost done. Major props to him. This is the first time he's built a piece of furniture that doesn't have an IKEA logo on it. He's done an amazing job. 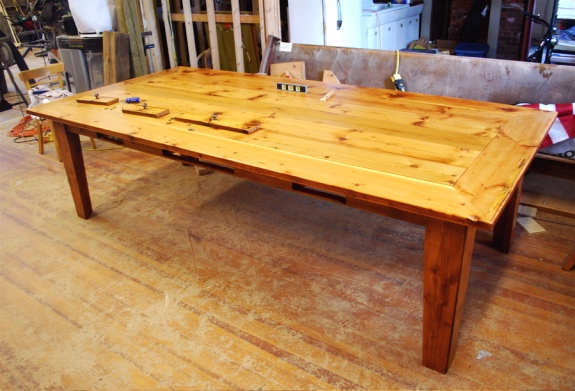 I look forward to having Thanksgiving dinner on it when we have a kitchen, which should be sometime during the 2030s.

I really like the looks of that table. That's impressive for his first piece of furniture.

OMG! Are you SERIOUSLY kidding me??!! There is total table envy going on here...I mean, we have a decent enough dining room table, which was a housewarming gift from my family and came with eight chairs. But furniture stores make things sooooo cheaply, so everything has begun to fall apart after six years. Yeah, six years. Andrew, that is a gorgeous piece of furniture!

After looking at it again, at those legs a solid piece of lumber?

I love the window and candlesticks. My wife loves Etsy too, I'll have to show her your sticks.

LimeyGeorge   Monday, July 20, 2009
Thanks for the compliments. Sally's been a trooper coming out at all hours to test fit the drawers and help move the top. The legs are each a pair of 2x6's that taper to 2x4 at the bottom. The lower edge of the table skirt is 1 1/2" higher than standard to accommodate taller members of the Pants Brigade.

Perhaps the first annual Humzoo Poker Tourney can be held on that table...

Your Etsy site looks fantastic, Sally! Good luck with that! The table is beautiful, Andrew, almost as beautiful as your new little niece!! Life is good.

Adorable baby (no joke about looking that good after giving birth. She looks great!), love the etsy site, GORGEOUS stained glass (if you passed that up, you'd be kicking yourselves), and kick ass table! Very impressive!

Beautiful table! Beautiful new mom and baby. Good luck with the Etsy site. I hope its successful for you.

Your remolding activity can be graded "A".

i love your blogs, i love people that can write and write well ( i am not one of those, so i appreciate it so much in others!) Your table is amazing! I wish i had the a. the room for one and b. the talent to make it.

Sally, I meant to get to this before now!! Congratulations, Aunt Sally and Uncle Andrew!

Your new window is perfect. We understand completely about the need to buy such things of beauty -- art. I can't wait to see your home one of these days.

Your Etsy site looks great, and is a hoot. You crack me up. I'm very interested in how it goes for you.

Andrew's table is so gorgeous! First piece of furniture?! The pew behind it looks like good bench seating for a crowd...

Pegi, have you thought about selling your jewelry online? (or maybe you've been doing it?)

Yo, Sally. Yes and no. I have been concerned about undercutting my galleries - and my pricing is generally higher than most of the stuff I see on, say, Etsy. Other, specific craft sites require quite a large fee. If I was sure I could sell what I need to online I would be happy to go that direction, although I do like having my jewelry at galleries and enjoy my relationships with the owners.

Great blog. Glad you survived the cruise, congrats on the website hope that does well, love the window. I think that table is amazing. Very impressive, Andrew. I can see the family sitting there enjoying a repast. How you have creative energy after all that work and those 400 books impresses me even more but I hear you come from good stock. :) Congrats on your family addition as well.