Taken to the Cleaners

A couple weeks ago I made my yearly pilgrimage to STARCREST CLEANERS to get our comforter washed. Like true Towandians, we eat in bed every night so our comforter doubles as a table cloth and napkin. When it accumulates so many stains that I can't remember all their names, I strip it off the bed and let it enjoy a stay-cation at STARCREST CLEANERS.

When I brought it home after being cleaned this past time, I noticed a tear in one of the corners. Wait, make that all four corners. And up and down the length of every side. It seemed that our comforter had gotten into a fight with some dress shirts and lost. 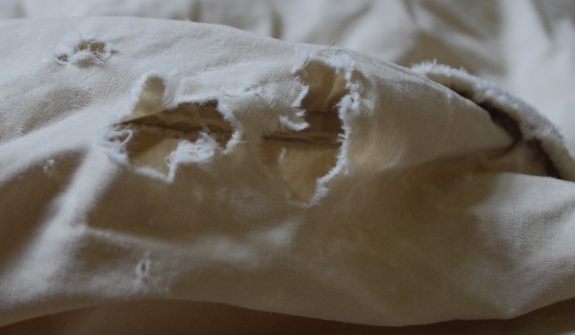 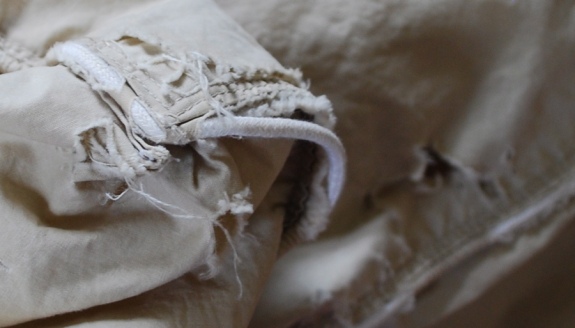 So I hauled it back to STARCREST CLEANERS and filled out a damage report. Today my check came in the mail.

I assume they want me to use the check itself as my new bedding since $14 isn't going to buy any.

Subtracting the value of the check from the price of the dry cleaning ($20), it ends up we paid them $6 to ruin the comforter. Not bad, but I could have done it for a lot less by putting some catnip in the lining and turning Sam loose on it. And the best part is I had to fight with them to get the comforter back because they claimed they now owned it.

I know this all amounts to me being a huge whinerpants. If having a torn comforter is the worst thing that happens to me today then I've got a lot to be grateful for. And truth be told, I wasn't angry about the comforter. Stuff like that happens. But what elevates me to unhealthy levels of rage is how the company dealt with the issue. At no point did anyone apologize. Instead they just leveled accusations (are you SURE it wasn't like this when you brought it in?). I guess I should be happy I got any sort of compensation for it, though an "I'm sorry" would have gone a lot further than $14 in terms of customer satisfaction. In the end, I think it's really the impotence of feeling wronged and not having any recourse (other than not going there again) that eats at me.

Anyone else have a story about being urinated on by corporate America?

Best blog ever dude. So good.

Yeah, not so corporate but here is mine...
http://www.humzoo.com/George/blog/8/

As for Starcrap, I would cut out the bits of comforter with damage and display it, along with the check, in a massive frame in your hallway.

They are a chain, right? I would take this complaint up the corporate ladder. This aggression will not stand!

It looks like it got dragged on the ground..

I would be SOOOOO pissed!

I agree with Pegi - I would be furious! Comforters are not cheap and then to figure out that you basicall paid them $6 to ruin it and they could not even apologize for it? That is not right at all - I would be going up the chain of command and - if I got no satisfaction there - would be going to small claims court just on the principle of it

Oh, Sally, I'm so sorry. I would not be able to let this case rest where it is. I would send a letter and pictures.....or a copy of this blog.....to the corporate office. The check they gave you was an insult. The comforter is ruined but you need to be justly compensated for it. Don't cash the check if you haven't yet. I think cashing it might mean (legally) that you accept their settlement. I think I would return it with the letter. I would also write a letter to your newspaper and tell them what happened. Give the cleaners as much bad publicity as possible.

Because I am a believer in customer satisfaction, I would not let it end here. You are right, an apology would have went a LOT further than the $14 ever will. I would like to know where they got the $14 figure from if nothing else.

I think you also need to pursue this matter. Best not to cash the check. I think an explanation is owed you on their arrival of a price of $14 and also how they managed to do such a number on the comforter. I would also want an explanation why they are ignorant enough to think they now own the comforter, after all you took it there for cleaning purposes not for a sales transaction. When you go in to inquire about this I would take "snuffy the snuffer" with you so they know you mean business!

stheinz   Wednesday, July 22, 2009
This post is full of WIN. Maybe we could print out hundreds of copies of this post, tape them together, and sleep under *that*.

Thank you all for sharing your outrage! Somehow it's therapeutic. Thanks for the link Joe - I did write corporate a note and sent them the address to this page.

I'll let you know if anything happens.

I would take out a massive billboard for a week, and have its message as"Starcrest Cleaners Suck"; however, the billboard cost would be many times what your initial value of the blanket or comforter was.

A billboard campaign won't be necessary. I talked with someone at the home office today. While they won't be naming me Blogger of the Year anytime soon, they did apologize and are reimbursing me for the price of the dry cleaning (which apparently is SOP for any damage claim, though for some reason it didn't happen this time). So as far as I'm concerned, the matter is resolved.

WHAT? I still don't think that is right - they damaged your comforter which means you have to buy a new one (that you were not planning on having to do) and now - they are giving you a $14 check and reimbursing you the price of the drycleaning? If you are satisfied - then I guess that's fine - but it would not satisfy me. Money is way too tight nowadays for someone to ruin something of mine and then not pay for me to replace it.

I say small claims!
We had an incident where a girl asked Jason to do a wedding invite for her and said she would pay whatever his price was. We figured out later that she meant she wouldn't pay anything. She apparently thought we were friends - even though she was a crazy person who just happened to be my neighbor at one time. So, when Jason sent the very reasonably priced bill to her - she said - well, I don't really want to pay you - I thought you would do it for free. Then, her fiance threatened Jason's life - yeah - life! (all via email mind you!) So, Jason ran down to small claims, stated his case, she came and brought her lawyer sister - cried and said she thought we were friends so she shouldn't have to pay him. The judge saw right through her crap and said pay the man! So, a week or so later, a box was delivered to the door. It was wet. Jason put on some gloves, opened the box, and it was filled with crumpled up dollar bills. But - why was it wet?! Oh - her fiance peed on it before they sealed it up. Nice.
But - hey - we got the money.
So, we didn't get urinated on my corporate america, just a crazy person.
That $14 check you got kinda feels like a box of peed on money to me.
-Sarah

I think they owe you a lot more than the cost of the dry cleaning. I'd check the local news for an investigative reporter and tell the story. Maybe the comforter wasn't new and a brand new cost shouldn't be expected but some compensation for loss of property. As someone said, your call--if you are happy, that's fine, but it seems it allows this business to do the same thing again to you or someone else if they are not taken to the cleaners (ok, bad joke) on this one.

I'm also staggered by #17 by Sarah. That is so disgusting.

Sarah, that is one messed up story. Sounds like you we're dealing with a couple of 8-year-olds.

I've got a new nemesis - the garbage company! They tore the wheels off our garbage can. Now it can't stand up on its own, which I've come to realize is a pretty important feature for garbage cans.