After flatlining for the better part of a year, our church renovation project is finally being resuscitated. We're ready to do some major demo work on the interior, which means we need to vacate the place for a few months as we tear down in order to build up. This weekend I began moving non-daily essentials to the basement for storage and came upon an old diary of mine. 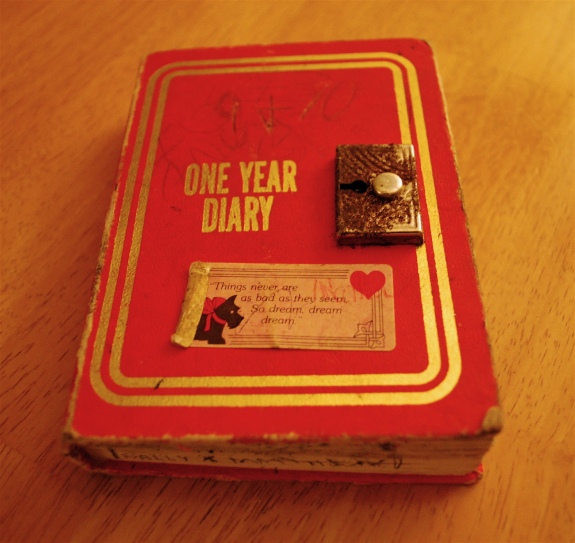 I began it in 1989 when I was 9 years old. My world then was small, easily upended by a lost softball game or bad grade on a test (OK, things haven't changed too much in 21 years). 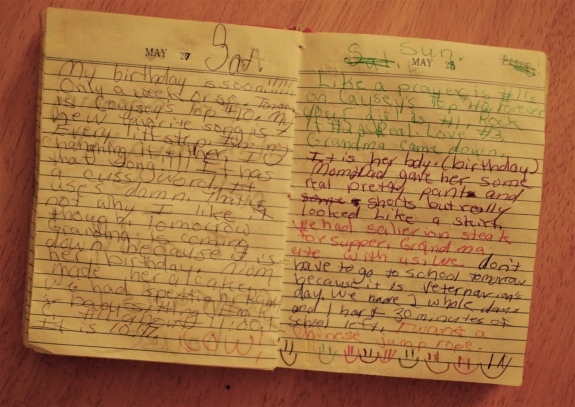 As I was reading through it, I thought my family might get a kick out of revisiting some old memories. 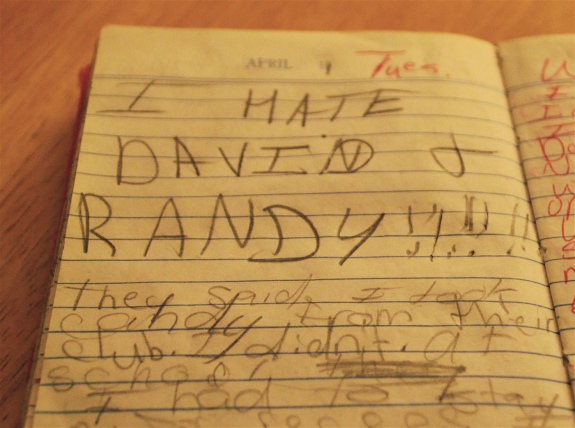 Jan 1, 1989
I am 9. We went to our Grandma's today. We had noodle soup. It is 10:30 now. We have a dog named Scruffy. Randy has a bird named Polly. David has a bird named Woodstock and I have a bird named Barney. My grandma gave us an Apple II GS computer. All our pets are doing fine. HAPPY NEW YEAR!!

Jan 8, 1989
This is the best day of my life. Mom took me to Venture and got me a big barret, a hair crimper and a hair waver. David crimped his bangs. He looks like a baby. No offence David. We waved Scruffy's hair. All the pets are doing fine.

Jan 16, 1989
We made cookies today. Peanut butter cookies. I wonder what Honkie means. [I wonder why I wondered that?] I went to Peases with Rhiannon and got $1.76 worth of candy. We had Macroni and Cheese for dinner. I wish Barney and Woodstock would have babys. There's not such a thing as the tooth fair and Santa.

Jan 26, 1989
Still sick! David went to school but me and Randy and Mom stayed home. I have TONS of homework. Mom was really nice to me. She treated me kind and read me stories. Dad and David were too. We watched David on Battle of the Books.

Feb 9, 1989
I lost my applince today. David found it in the Kleenex box. I lost a tooth 2 years ago. I'm putting it under my pillow to prove there's no tooth fairy. [Why did I question money appearing under my pillow?!]

Feb 10, 1989
Tooth fairy didn't come last night. I want to be an astronomer and astronaut when I grow up. I want to go to the Moon or Mars or just float in space.

Feb 21, 1989
I feel great!! Reason #1 is we have puppets tomorrow. #2 is the boys didn't bother us. #3 is I don't have to take a bath tomorrow. [These are still good reasons for feeling great.] We had cream ship beef for dinner.

March 7, 1989
Dad took me out to see the northern lights. But we didn't see them. Mom is yelling at me for my room. It is a mess!! I'm grounded till it is cleaned.

March 15, 1989
I can't wait! We were eating dinner and Mom said that we get to go to North Carolina for Easter!!! I can't wait! I get to see my relatives! We had speggtigh for dinner. My Two Dads is one of my favorite shows. It was about sex this time. EWW!

March 17, 1989
Me and Dad have Pinch Bug and Love Bug but Dad gave me Green Bug. It is green with googly eyes. We had macronia and cheese.

March 27, 1989
Aunt Janet's here! She is SO nice. She put Emily, Sarah, and my hair up into a bun. Brian was being nice when we were playing hide and see. We ordered 6 pizzas!

March 28, 1989
Unfortalany we have to leave tomororw. At Krispy Kreme me, Aunt Janet, and Mom made something like a club or a name. We called ourselves the SS treois. We went to Uncle Bob's office and we took a tour of it. His job is a graphic artist. David wants to be one. I want to be one in my spare time. [Ha!] I will miss all my counsins and reltivits.

March 30
Me and David are making a bueissness like Uncle Bob. David is my boss. Randy is yelling at me to get my light off so bye.

April 7, 2009
Mom and Dad went out to eat at Mountain Jacks. We stayed here alone and had pizza. Randy and David made some pranks. They were SO funny.

April 20, 1989
Happy Birthday Mom! Me, David, and Randy went to Peases to get her some candy. I got some for me, too. We were going to have a party for her but it was too late because I had my Art in the Round workshop. When we got back it was past 9:30! It was too late to give her my gifts. We had tacos for dinner.

May 1, 1989
Guess what!! David has a girlfriend. Her name is Cournty. David and Cournty, sitting in a box, kissing naked, oh my gosh! [Could that be THE Cournty??]
We are going to the Ranger's funeral Wednesday. Aunt Janet is sending me earrings.

June 16, 1989
Mom took me strawberry picking this morning. We got tons of strawberrys for only $5.00. Mom also took me to B&J Coin Shop. It really should be called Baseball Assericois Shop. There is more baseball stuff than coins.

June 18, 1989
Happy Father's Day to my top pop. I love dad. Mom made a cake and icing. I gave dad blue mints and a card. Since Randy is gone, Mom is doing the paper route every day and me and David take turns. I'm doing it tomorrow.

July 1, 1989
This morning was totaly boring. Then our hole family went to Jeffery Alans. Randy got some model rockets. David got 2 and I got a pack with 3 model rockets. I haven't started painting it yet. Me and David are going to wake up at 7:16 in the morning and work on them. I love Bobby Brown.

July 19, 1989
Our family went to Showbiz today because that's where Randy had his baseball team had a party. Woodstock and Polly had been kissing each other a lot and preaning each others feathers. We are going to hold a wedding for them July 21. Scruffy's bdy. is tomorrow. We got our van windowns tinted. There neat. It is 10:21. Still love B.B.

July 20, 1989
HAPPY BDY TO SCRUFFY! We had a bdy party for Scruf. He is 5. Mom got him a bone and a toy hamburger and all sorts of cookies and snacks. Mom took us to Eagle. They have all sorts of Batman cards.

July 21, 1989
Randy is lucky. His friend took him to see a movie - Honey I Shrunk the Kids. He said it was really good. Well the birds didn't get married because Randy (brat) didn't want Polly to get married.

My last entry was on October 9.
Oct 9, 1989
Well that's it for the CUBS. They lost enough games agiatz the Giants. So the Giants are going to the dumb world series. I thought the CUBS would make it for sure. Oh well. Randy got his braces. He looks WEIRD!! David's bdy is in 2 days. I love Batman. It is the best movie.

Looks like you last entry could be the same about the Cubs. :) Great stuff. I'm sure the family will enjoy the blast from the past. I especially loved "cream ship beef". LOL

There is so much to comment on! I think the basics are: Boys are stupid, kissing is gross, candy is awesome, and Bobby Brown is king.

This is the most entertaining blog I've read in a long time. And if that was "THE Cournty," he may have been stretching the truth. As I recall, I found him annoying in 1989.

I loved my two dads too! this is great!

Too funny, Sally!! Wow, some of these events certainly do bring back memories!! It doesn't surprise me, but I don't remember your "love" for the Cubs beginning that early in your life; the "I hate David & Randy" I do remember!!!! I loved the July 1, 1989 when you and Dave were going to get up the next morning to paint rockets at 7:16!! Was that AM or PM??
After our little talk at the beach about intelligent life existing in the universe I can see your roots for this go back to at least the fourth grade.

This blog made my morning!!

If you don't become an astronaut, I hope you at least get a chance to float in space.

In order for the tooth fairy to come, you have to TELL the tooth fairy that you are leaving a tooth under your pillow! That also reminds me of the time that Randy had some kind of an electrical kit and rigged it up somehow so that when the Tooth Fairy removed the tooth from under his pillow, an alarm went off!! Scared the T.F. to pieces but she/he was able to get the job done and get out of there!

It also reminds me of the time that you came home absolutely furious at me. You said I had lied to you. Rhiannon's parents had told her the truth about Santa Claus and you were furious at me for lying to you. Needless to say, I felt pretty awful but I held my ground and wouldn't give in when you demanded to be told the truth!

This is a precious blog, Sally, just like you!! I laughed until I cried. I think it is evident to everyone who reads this that I was the lucky mom who got to raise such a bright and interesting and delightful little girl who still has my heart today! Thank you so much for this! More fun than I've had since the beach!! You were a wonderful writer then too!! I thought it was interesting that in your diary you didn't even complain about the cream ship beef!! Love you, honey!

I love that you were so upset that Bon Jovi knocked Madonna out of the number one spot on the countdown. And cream ship beef sounds deeelish. Finds like this one make packing a little more bearable.

Awesome blog! Those were a really funny.

That was an interesting blog. When you were keeping that diary, I was 15 going on 16. Interesting final entry. I waited until the 1989 playoffs ended to start my job at the pizza place. I asked my soon-to-be boss if I could wait until the Cubs were finished in the playoffs. I didn't expect it end after five games against the Giants. I'm still having flashbacks of Will Clark's grand slam.

Dude, awesome blog. I want to comment on my favorite parts, but there were too many. Bobby Brown. "Caysey's" Top 40, Venture. The crimper... it goes on and on.

Thanks for sharing that. It is much more enjoyable now than when I used to break into it (that lock isn't exactly military-grade).

Oh and I'm still waiting for Debbie Gibson to come to Springfield.

I love how Bill mentions he was 15/16 the year Sally kept her diary - I was trying not to think about the fact that I was 23. *sigh*

Awesome blog! Truly amazing! I have fond memories of Joe and I riding our bikes to Venture and buying Crystal Pepsi. Those were the days.

I spent that year watching the Cubs win the old NL East and wanting to get my license.

Can't wait for more. Tell us about the renovations, too.

So fun! I don't think my diary entries would be humzoo material. I guess I also was 12 when I was most dedicated to mine - a little hormonal and mean those days....
I would love to say that I remember spending the night at the hotel, but I really don't...I guess we didn't party too hard. I am sure we enjoyed getting a break from the boys!
Happy to be your counisin!
S

Funny, Sarah, I was thinking the same thing about how Humzoo-friendly your diary would be -- but you WERE older!