Anatomy of a Floor

In any renovation project there are highs, lows, and the occasional threat of filing divorce papers. No, YOU take the house. Please.

This weekend we crossed our own little Rubicon (more like the drainage creek that runs through Towanda) when we removed the last vestiges of the second floor. The floor had been put in 8 years ago by a person who wanted to turn the downstairs into an antique store and use the upstairs for apartments. We've gone through a number of design changes since we bought the building 5 years ago, but never wavered from wanting to remove that floor. 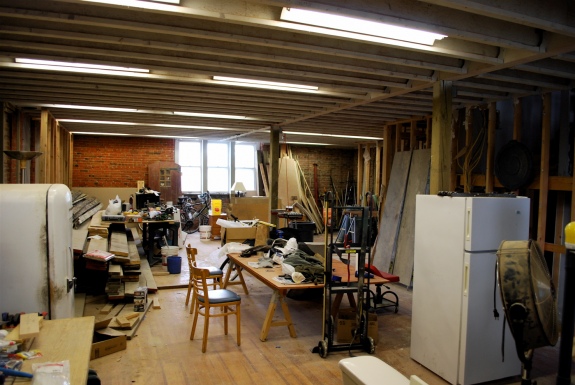 It bisects all the windows in the sanctuary and prevents you from having that feeling of insignificance that any good church should produce. (We're going to build a loft area on the right side with a bridge that connects to a deck in the apse, but it won't block any of the windows). However, as much as we've disparaged the aesthetics of the floor, without it we wouldn't have been able to do what amounted to 3 years worth of work on the ceiling in order to expose the roof trusses. So thank you floor, and now we destroy you.

Before we began dismantling it we covered the ceiling with plastic to keep the beams as dust-free as possible, because the next time they will be cleaned will be never. 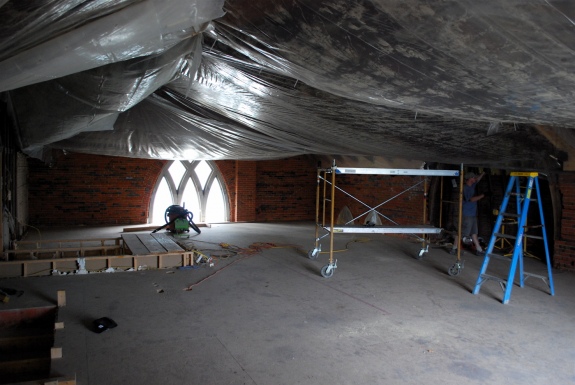 The subflooring was not glued to the I-beams (can I get a hallelujah) so we were able to remove the flooring piece by piece. Andrew knocked on the flooring from below with a sledgehammer, which loosened the nails enough for me to pry them out. 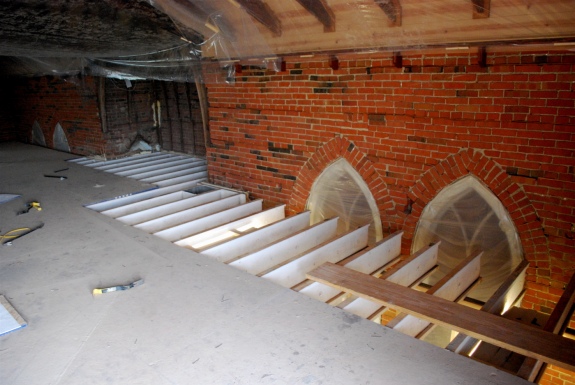 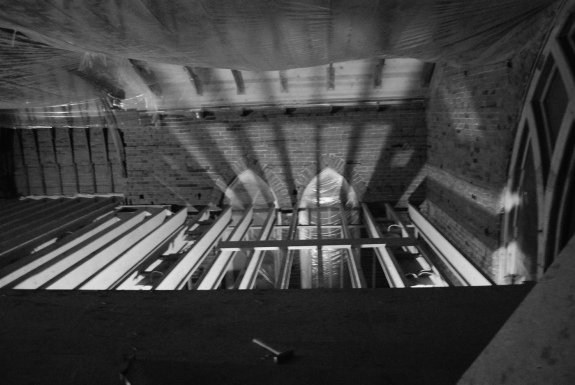 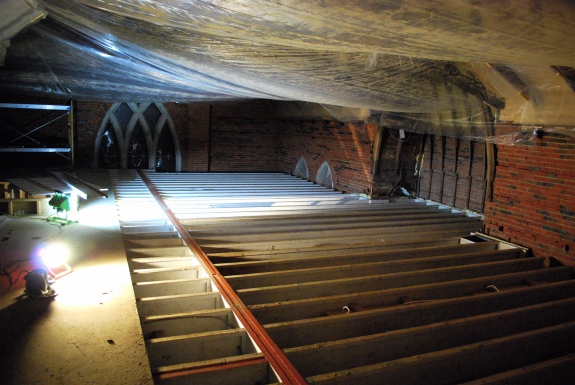 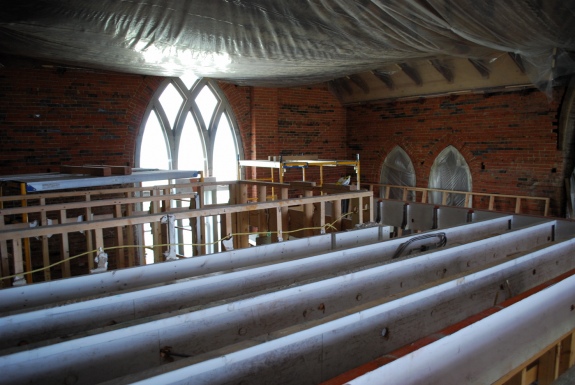 Once the subflooring was removed from a section we took out the floor joists, which allowed us to have our first unobstructed views of the ceiling. 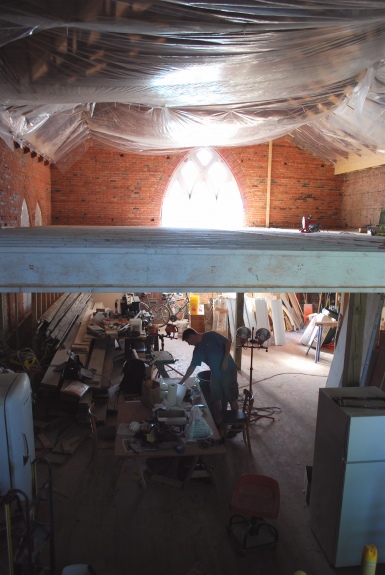 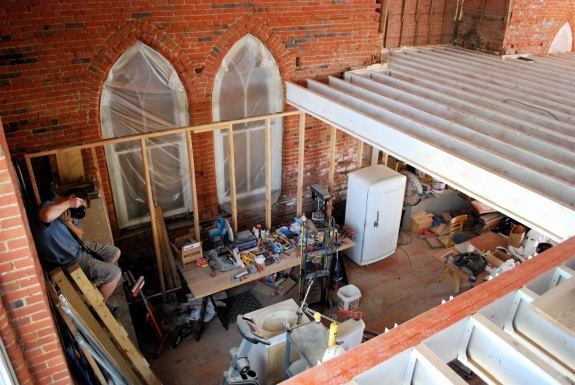 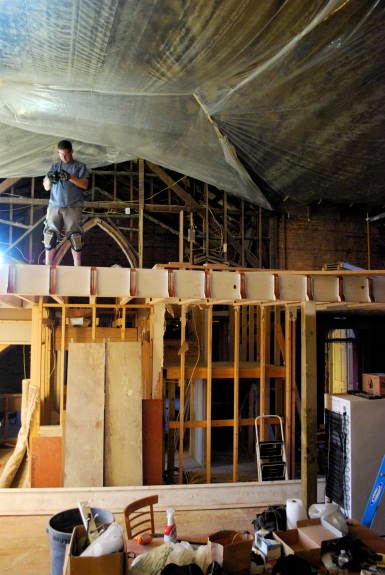 Some of the joists were 20' long and not the easiest items to move around, but we eventually found a temporary home for them on the stage. 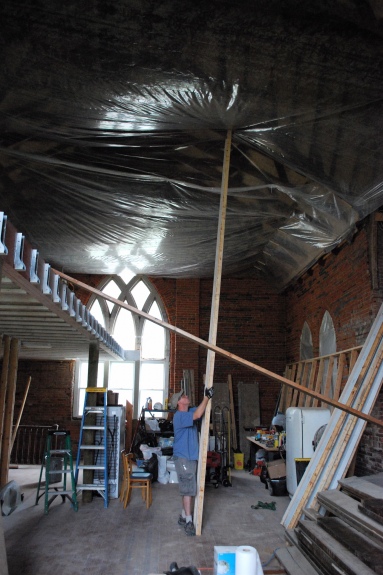 Once the subflooring and joists were down, we still had to contend with the main support beam running through the center of the room. 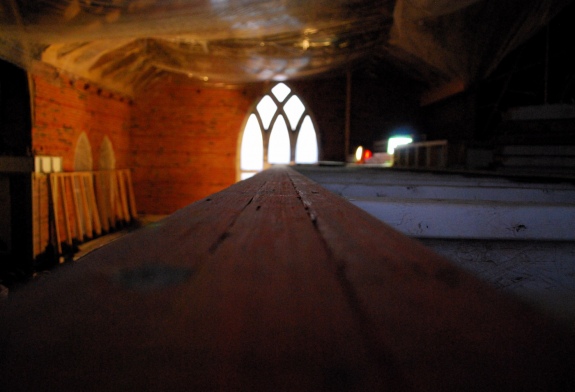 It's made up of 3 sections of laminated veneer lumber, which weighs approximately as much as Denmark. For a week Andrew mulled over how to take down the center beams without creating a crater in the floor, or our skulls. Using all he learned in high school physics, he came up with a rather ingenious contraption that slowly and safely lowered the beam down. 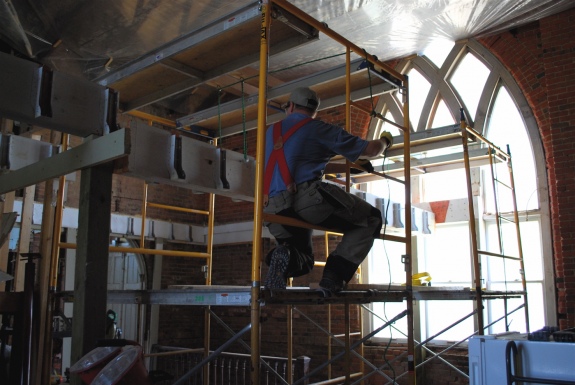 Now, there were still two more sections of beam like this one to lower. Positioning multiple levels of scaffolding is time consuming, so Andrew came up with a scaled-down version of the above model that used only one set of scaffolding and a single, central pulley mechanism. It worked beautifully and the second beam came down gently.

Then came the time to remove the third and final section of the main support beam...You know how first-time parents lavish a lot of attention on their child? There are baby books filled with photos and footprints, and napping and feeding schedules are followed to the nanosecond. Then comes the second kid, and maybe the parents don't feel the need to document every bowel movement. By the time the third child comes along, the only picture is a blurry snapshot of them eating shards of glass. That's kind of what happened here. 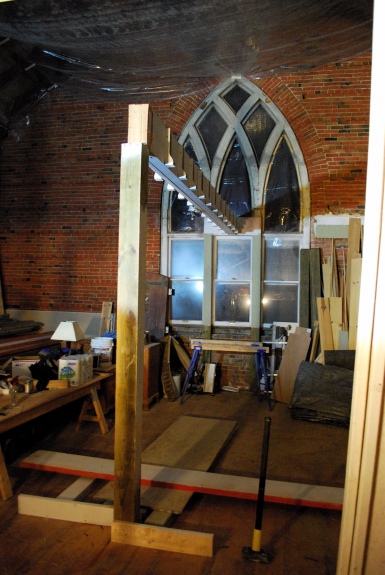 No scaffolding, no pulleys. Just a sledgehammer and a prayer that it would crash on the floor where we threw some boards. 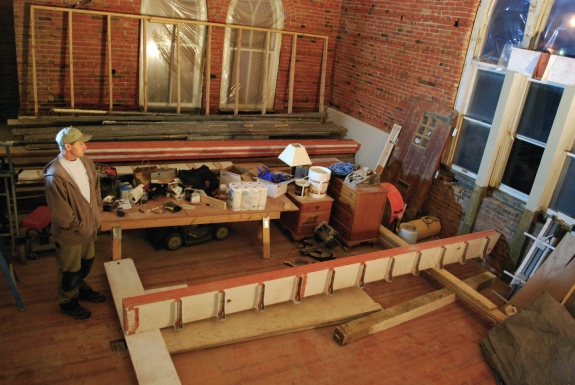 And it did! Though you may notice that the middle window looks cleaner than the others. That's because the beam shattered the glass on its way down (which was AWESOME), so we put in a storm window and called it a day.

So now the second floor is out and the church is feeling a little bit more like its old self. 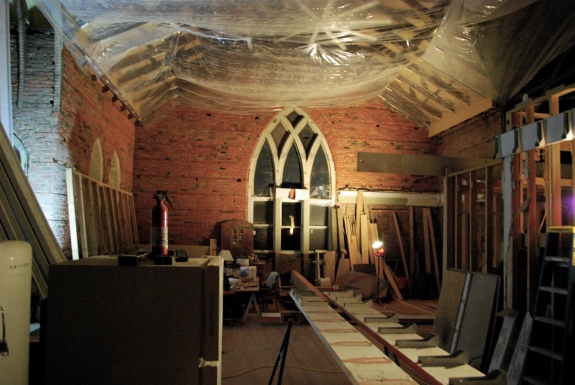 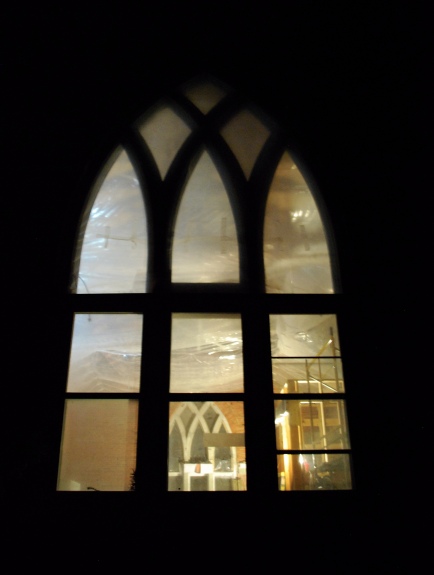 Now THAT is a project! You win!
I'm so happy to see those windows unobstructed. I know you guys are too.
Cheers!

I'm so impressed with you guys that you have the patience and drive to do this project. I would have gone on a killing rampage after the first 2 days of demo.

Wow, what a big difference in the looks after the floor has been removed. You guys are really going to have an awesome place when all of this is done.

Nice! I'm impressed. That is not an easy undertaking. So.....what's that fate of all that really nice engineered framing lumber?

this is amazing. we would have definately had a divorce by this point.

Sally and Andrew, you guys are simply amazing. What you have done, what you have learned, what you have figured out, it all boggles the mind. I have the utmost respect for anyone who can do what you've done! It's breathtaking to see the sanctuary and those big, beautiful windows! Congratulations to both of you on a job well done. And Sally, I really enjoyed your blog. If flipping churches doesn't work out for you, you could always write for a living!

I love the last picture where you can see both windows unencumbered!!!

!   Monday, October 4, 2010
It's very satisfying to knock down heavy things with a sledgehammer. As an added bonus, it didn't crater our floor, which would have made for a funnier conclusion, though probably would have hurried any divorce proceedings.

We (I) rushed it at the end, and it was dumb to let my impatience have the opportunity to collapse our floor. 100+ year old buildings deserve a little more dignity in the rebuilding process. Sure was a lot of fun though - something we don't get too often in the midst of plaster and old insulation. =)

Thank you, EP, for hitting the floor with the sledgehammer and not my daughter.

What an amazing space! Unbelievable how you are transforming the place. Kudos!

I'm just speechless. This will be breathtaking....

Thanks all. Getting the floor out has been a huge mental boost that helps us keep motivated. It took a lot of grunt work but the hard part will be putting it back together again.

Matt - we cut it up and burned it. Just kidding, we're going to reuse some of the joists & subfloor in the loft. We have about 15 of the massive LVLs. Some we might be able to use but we'll put the rest on craigslist and see what happens. We've had the engineered I-beams on craigslist for a couple weeks for what I thought was a bargain ($1/foot) but so far no takers.

SallyPants   Monday, October 4, 2010
Wow!! How impressive ~ both the photos and your blog, Sally...not to mention all the work it has taken to get to this point in the renovation journey!!!
Awesome!!!! Can't wait to come out west for a tour when the church is completely finished...or maybe before!!!!
Sending love to both of you!

I'd like to say something other than what has been said but I can't think of anything other than "amazing" and what a lot of work. I'm enjoying the process and seeing where it all ends. That window is worth the work to recover--it's too beautiful to cut in half.

I'll say something that hasn't been said...reading, "a blurry snapshot of them eating shards of glass" made me laugh right out loud! kind of made my morning :)

you are a terrific writer...and you two have an incredible sense of vision for things to come!