It's been awhile since the last church update. Things have been moving forward but the nature of the renovations doesn't make for sexy blog material. Barring physical mutilation or Acts of God, hard wiring gas lines and stripping window frames aren't the sort of things that keep my 3 readers coming back. But I feel an update is in order mainly because otherwise I'd have to work on my dissertation.

We still haven't retaken occupancy of the building. When we moved out last August, we thought we'd be gone for about 4 months while the major construction phase was underway. That 4 months has now turned into 14 months. At this point we're shooting to get the master bedroom livable so that we can move back and tackle the rest of the building as time and money permit. Both those things are in short supply right now and at times our morale flags. I sprayed this all around the church but it didn't help. 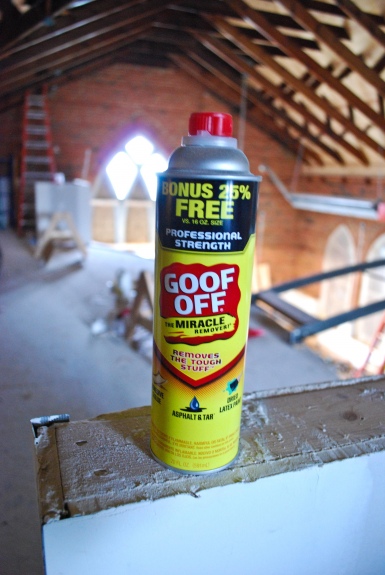 Last May we began dealing with the Window Situation. 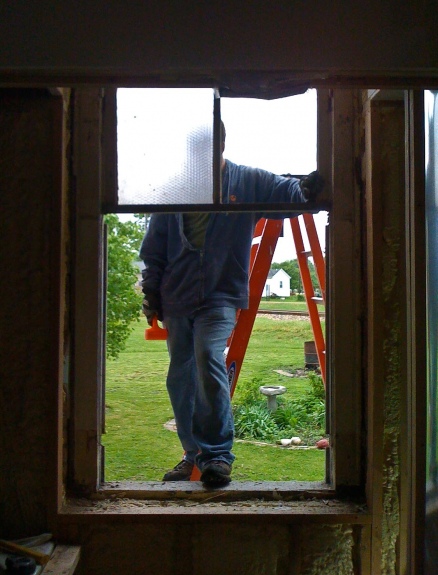 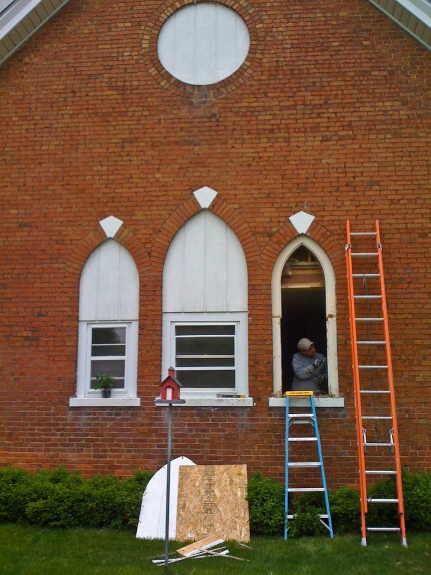 Most of the frames are in decent shape but a number of sashes have to be rebuilt. There's nothing easy or cheap about window restoration. The complexity involved is daunting but Andrew has stepped up to the challenge. He's mastered window lingo, which is no small feat in itself, and is working on rebuilding the master bedroom sashes. 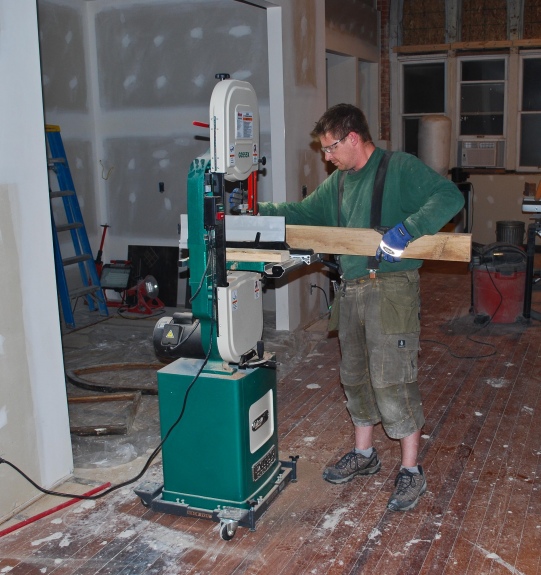 Andrew can call these three-quarter length work pants, but they're still Capris

We poured some concrete in what will eventually become the front porch. We topped it off with a stainless steel inlay that replicates the original design inside of the church's round windows. 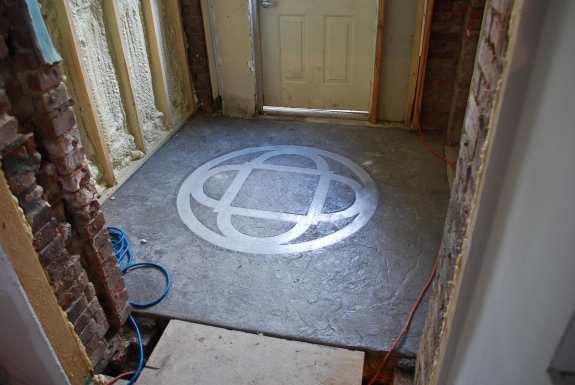 If you stand exactly in the center during the winter solstice, you'll probably get cold

We added a partition between the front entrance and the basement stairs. 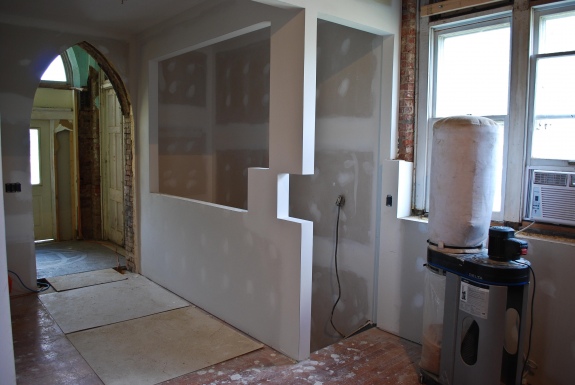 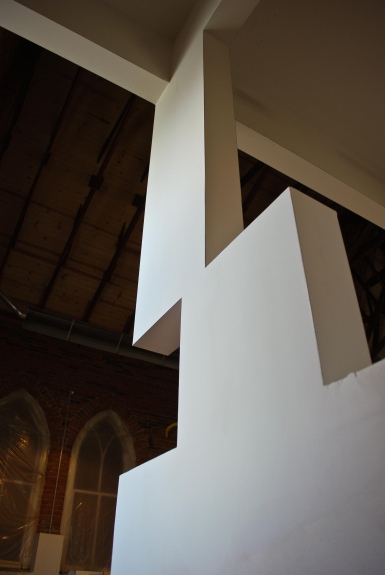 Back in April we visited our Bridge to Nowhere as it was being fabricated. 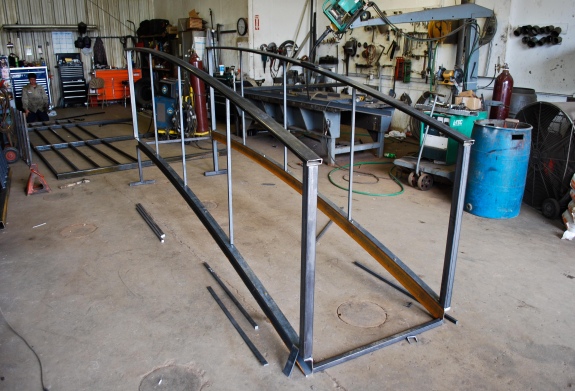 We brought our little bundle of alloy joy home from the welding shop in June. The base is in place, awaiting treads that we'll make from old wooden beams that came from a corn crib. Then we'll attach the sides and be able to get to nowhere more efficiently. 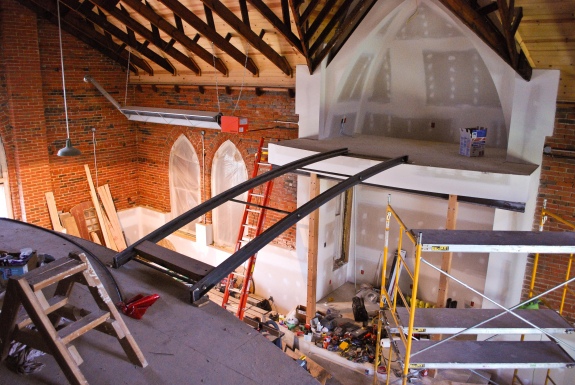 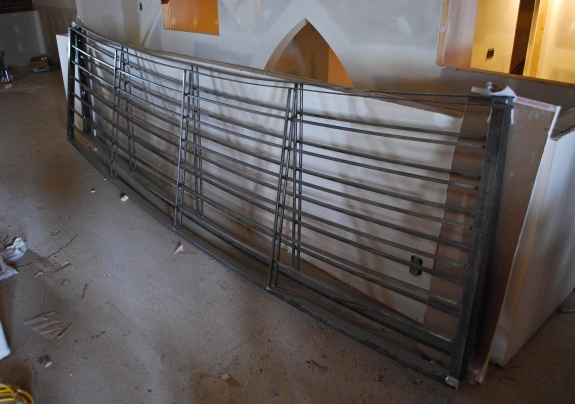 We also cleared some space in the basement to accommodate Andrew's wood fetish. Since it was used for Sunday school classes, the basement had a number of small rooms. We knocked down a bunch of walls and opened up the space. 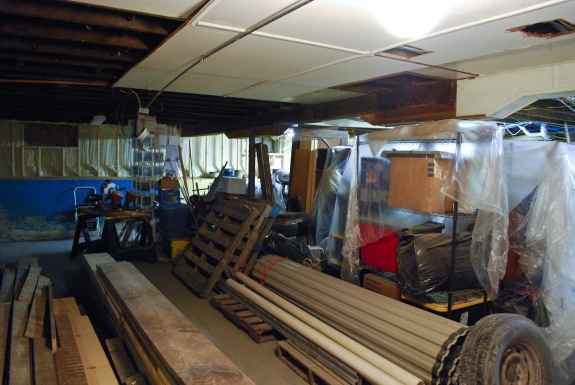 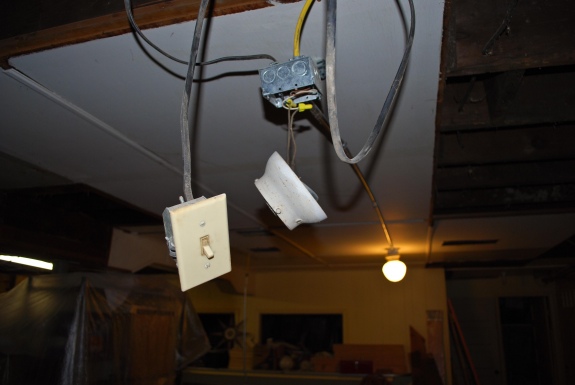 The building code in Towanda is...lenient

Then we framed and insulated the walls so that one day - we'll call it Phase 47 of the renovation - we can finish the space down there. 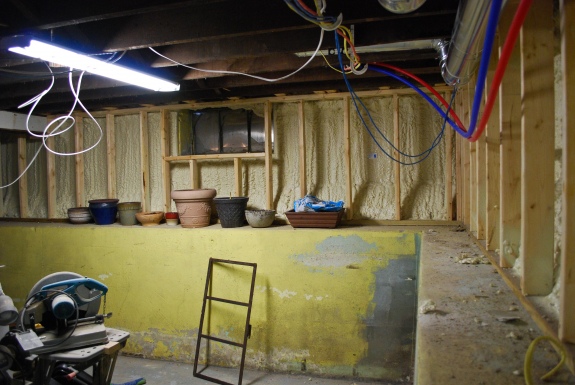 Without fail, every time we work on the basement we find old church relics: a membership list, tithing envelopes, programs. I love this discovery. 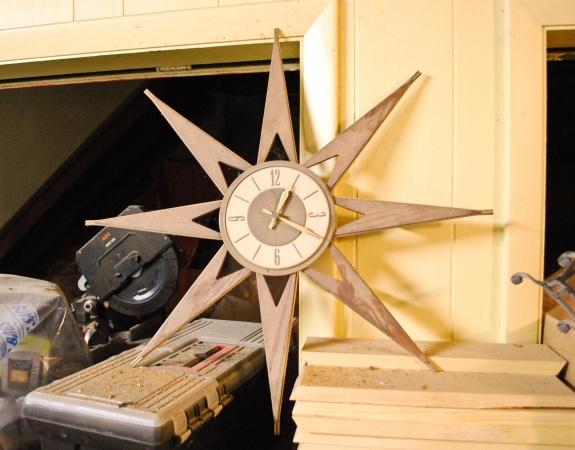 This will look really nice on the curb

We're about ready to get started on tile work. The kitchen was a bit of a challenge to prep because we had to cut out the wood floor and rebuild it between the floor joists in order for the tile to be flush with the rest of the floor. 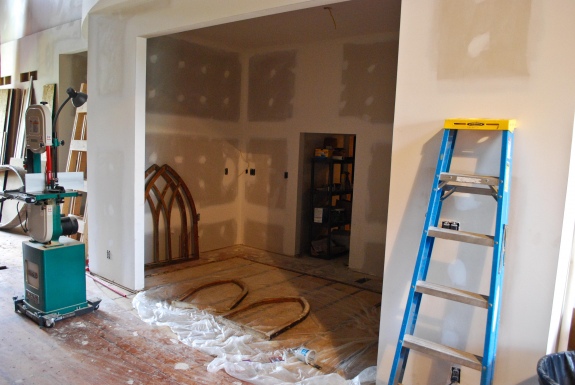 The master bathroom space has been a great source of financial and marital woe. My desire to never clean a shower door again comes with a price. The open S-shaped design is a labyrinth of walls and partitions that will make tiling unpleasant. 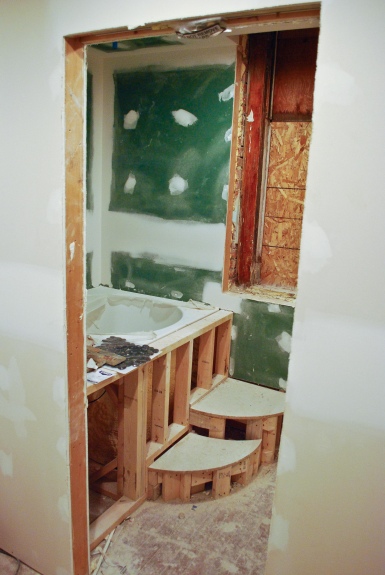 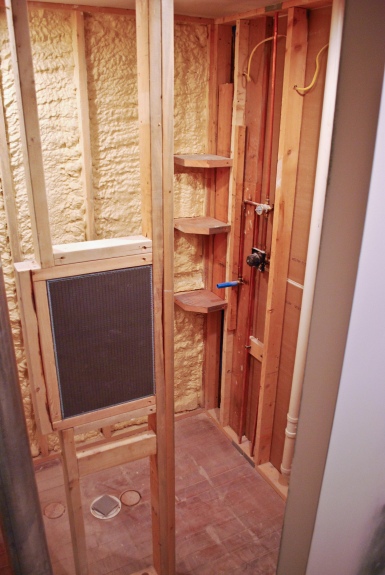 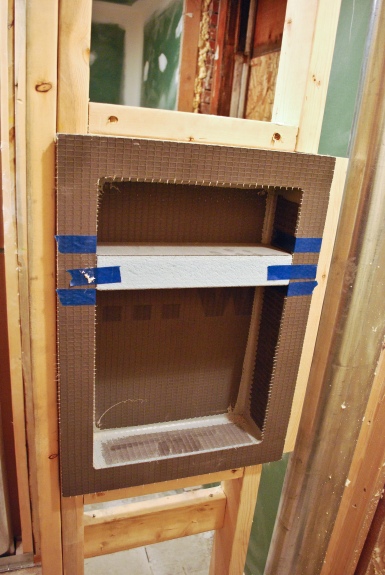 Once the electrical circuits were run, we got to play around with lighting fixtures. We got our hands on some used acetylene caps that we're going to turn into pendants. This light we salvaged from the power plant that became Andrew's business: 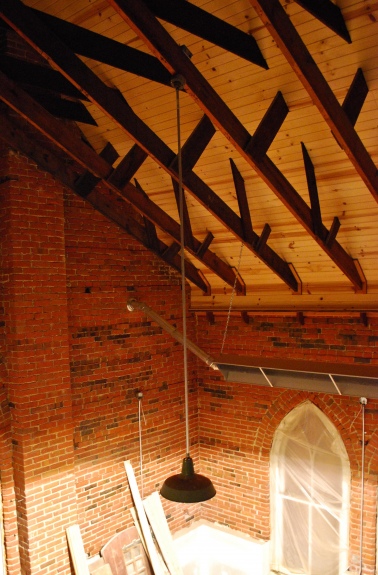 I bought a cheap light from Menard's for my office wall. I was going for the medieval torture chamber look but I don't think it's quite there yet. 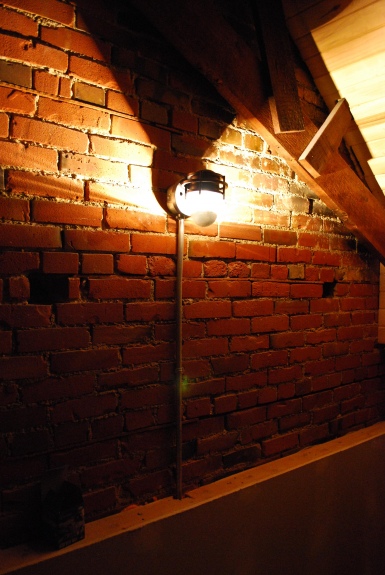 We've started to pick out flooring material. For the master bedroom we got 5" clear-grade maple planks. 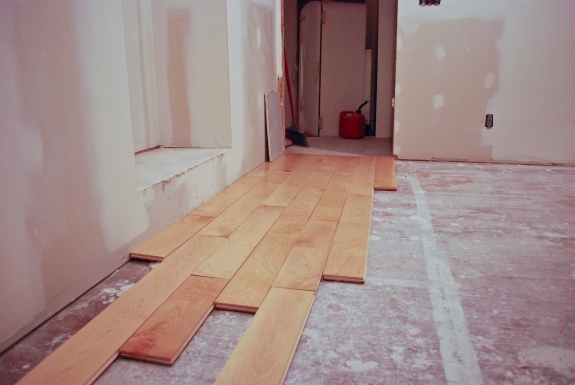 At the local architectural salvage warehouse we found 1000 sq. ft. of reclaimed flooring from the Masonic Lodge in Normal. (Thankfully, that old unique building was bulldozed to make way for a CVS and convention center - nice work, Town of Normal!) It's super cool wood, composed of bird's eye and tiger stripe maple, and will look pretty nice when stripped and refinished. 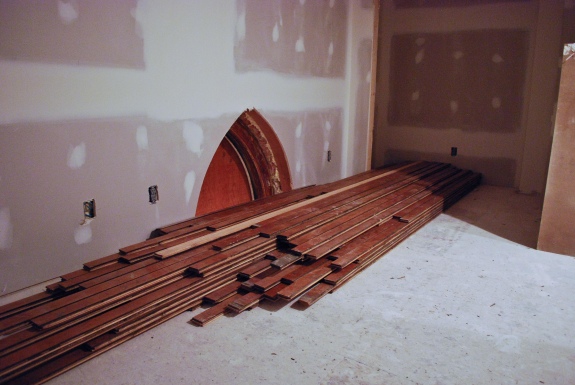 We've also "experimented" with how to cover the inside walls of the front porch. 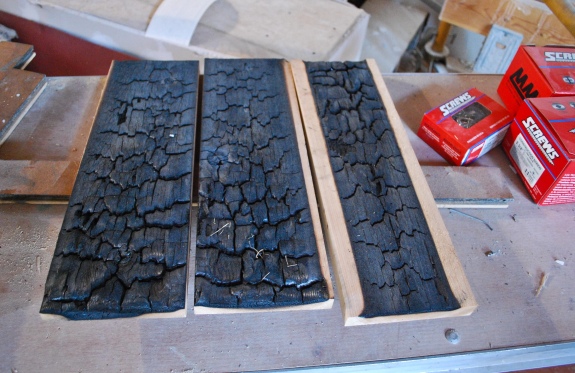 We had our fantastic drywall team back to tie-up some loose ends. 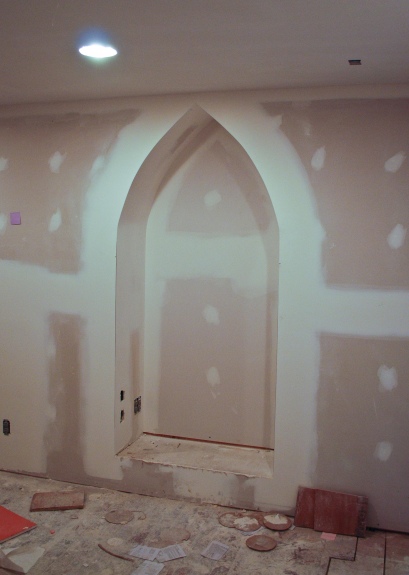 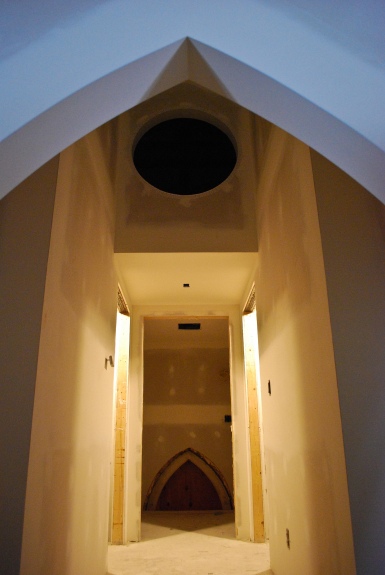 Finally, just in time for fall, we had AC installed in the bedroom areas. 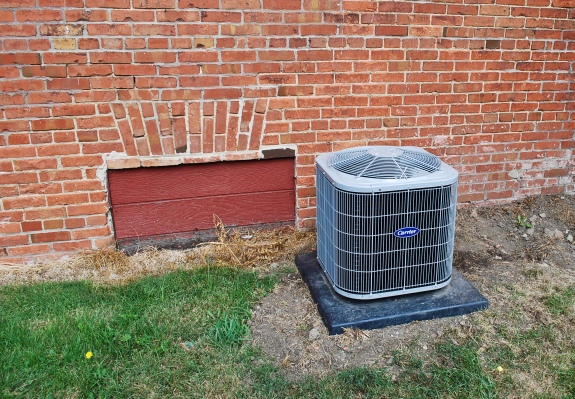 Please don't steal the copper inside

While this project sometimes feels overwhelming, we're slowly but surely turning it into our home. And if that doesn't work out, there's always Plan B: 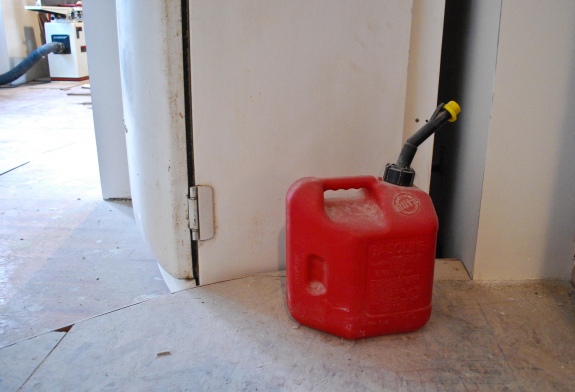 My god, Sally and Andrew -- this place is already a work of art!

I love the updates and captions nearly as much as I enjoy the photos. Great blog!

LGrant   Sunday, September 25, 2011
Hahaha... What sort of Sisyphean masochism have you visited upon yourself. Making bridges and windows. You fools!

TotallyNotEyePulp   Sunday, September 25, 2011
holy magilicutty you could fit a lot of hot dogs in there...

Very nice! Can't wait to come stay at the Pants B&B when it's done.

It makes our future endeavor to build a 1500sq ft 4 room house on a slab a walk in the park. Hope you get to move into your MB soon. Seriously, a very beautiful and inspiring project!

No way, dannie! After seeing Pegi's pictures, I feel like WE have the walk in the park. Can't wait to start seeing pictures of your project when it gets rolling.

I'm left speechless with each photo and blog you post. My parents have a 100+ year old victorian that needs to be gutted. Everytime it's discussed everyone gets so overwhelmed... I'm with dannie, even that would be easy compared to the task you and A have taken on. This is amazing. I hope the town of Towanda throw you guys one hell of a party when ya'll finish!

I love seeing your updates! I was just talking with Dave about it the other day, asking about current progress because I hadn't seen anything lately. It is so amazing what you guys are doing. Looks like your "3 followers" has grown :)

WOW is all I can say.

Carol   Wednesday, September 28, 2011
Burnout is inevitable. It's a big, complicated project that will be a show piece when it's done. We moved in with plywood floors/counters, limited plumbing, and several holes in the floor. My motivation dropped off a cliff, but we plugged along and sort of got things done(over 6ish years). The house is your life thing gets old; but really, this is an amazing, very high quality, unique project that you guys won't regret in the long term. Keep the faith! More beer!

Love the update! Miss you!

I love these updates. You've done so much. It is just amazing to see it take shape!

girlcarew   Sunday, October 2, 2011
Sally, your home is shaping up and these pics and your comments are incredible!!! I cannot wait to see this all in person one day!!!! You guys are amazing with all you have going on ~ truly amazing!!!!
Love to both of you and keep up the good work!! It's gonna be a beautiful home!!!!!

Let me rephrase: toddlers who don't necessarily come out of my womb.

Thanks for all the nice feedback and encouragement. It's easy for us to get bogged down in the everyday struggles of the building and lose sight of the larger picture. Humzooers always help me get back there.

That is looking awesome! What a feat! We can't even repaint our peeling, moldy bathroom ceiling - I am super impressed by all of your work! Sam and Art will be happy to test out the catwalk bridge one day! (They have large heads, so I think it will be safe)

I haven't been on in a long while but I remember seeing this in 2010.... LOVE seeing how it's going. This is truly awe inspiring. (And I love the way you tell the story too.)