The Day of the Dog Bite

Saturday morning, we decided to take the puppies for their first trip to the dog park. My mom was visiting for the weekend and we were all so excited for them to make new friends. When we got there, we decided it would be best to take the puppies in the small dog section. When we entered, there was a woman holding on to mutt. This dog was definitely not small. It probably weighed 60 pounds. So, I politely informed her that this was our puppies first time to the dog park with the intent of warning her that our babies were a little anxious and may not have the best social skills just yet. They've interacted a little with dogs in our neighborhood and in their obedience class and had no problems other than being a little timid at first.

After a few minutes, she let her dog go and they all sniffed around for a few minutes. All of the sudden, this dog pounced on Ollie and pinned him to the ground. I grabbed the dog and Ollie made a run for it, when the dog calmed a bit, I released him. He charged my poor little puppy and had him pinned on the ground aggressively biting his neck. Poor Inga was terrified with her ears back running in circles. As I scooped Inga up, Stephen and my mom ran toward Ollie. My mom grabbed the mutt by his collar and Stephen picked Ollie up by his harness. Poor Ollie was so terrified he had peed himself and he was in a state of shock. The irresponsible owner of the mutt, had the nerve to yell at my mom for touching her dog. Completely ridiculous considering the fact that her dog had attacked my puppy and she was just standing there! This woman was quite hateful toward my mom.

When I got close to Stephen, I saw that his arm was bleeding. He had been bitten when he broke up the fight. I felt like it needed medical attention, as it appeared quite deep. I informed the hateful woman that it wasn't appropriate for her to have a large, aggressive dog in the section marked "small dogs" at the dog park. What a jerk!

Once we got home and cleaned Stephen's arm, we decided to go to urgent care while my mom stayed and comforted the puppies. At urgent care, we were seen relatively quickly. They cleaned out his wounds, gave him a shot in the butt and a script for 10 days of antibiotics. They informed animal control (apparently it's the law) of the event and they sent an officer out to take a report. All we wanted was to get back home to our poor little babies!

While we were out and about later that day, we walked through the park and they were having a Puppy Mill Awareness event. We stopped over to see the rescued pups and make a donation. When we turned around we saw, Victoria Stilwell from the show, "It's Me or the Dog." We LOVE her show! We DVR it and use a lot of her positive reinforcement techniques with our puppies. We bought her book and got her to sign it. She signed it to Ollie and Inga and told them to behave! We told her about the incident and she was appalled. Love her! 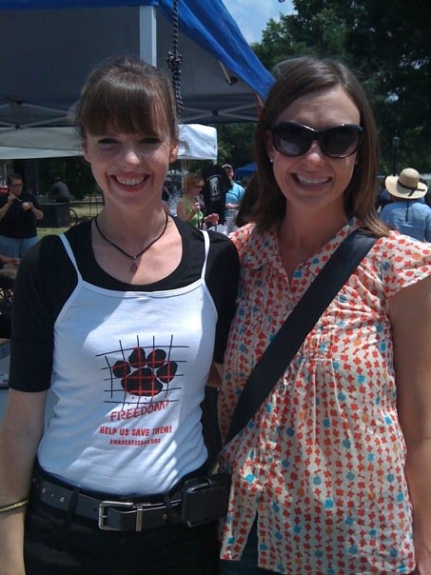 Stephen's arm is healing nicely and the pups seem to be doing well. They are playing together as usual and we have had a few friendly encounters with other neighborhood dogs. We are not sure if we will go back to the dog park or not. We plan to talk to our trainer at the next obedience class to see what she thinks about the whole thing. It's sad that one irresponsible pet owner that is too lazy to train her dog can ruin it for all the pups. I wish we could have taken Victoria to have a word with this dog owner! A little training could probably change that dog's life and improve the dog park for the rest of us.

Totally unrelated, I found $20 on the ground that afternoon. We used it to buy london broil for the puppies.

Unfortunately owners like that spoil it for everyone else. When I first moved to Oregon I was walking with my dog in a park close to a river. An Irish Setter came over and started bullying Lucky. Now, Lucky was a 90+ lb. Shepherd-Mix and not that experienced with dog encounters so he tried to be friendly but the dog kept at it until Lucky finally had enough. I was struggling since Lucky was so big and strong and the woman who owned the dog was doing little to help. She finally came over and got her dog and "explained" to me that the problem was my dog was on leash and her dog didn't like that. Totally asinine. Dogs don't get aggressive toward other dogs on a leash. I quickly got out of there only to find we turned on a dead-end and had to turn and come back by this lady and her dog. Again, her dog came over and started the aggression. The woman was a total moron and her dog was lucky Lucky didn't take the upper hand. I think Lucky could have wiped the ground with this dog but that wasn't the point. I didn't want a dog fight and was being responsible by keeping my dog on a leash as required in the park. She wasn't. I tried the dog park a couple of times but Lucky was just too slobbery around other dogs so I didn't take him back. I didn't feel he was behaved enough except on leash and that confused things with the other dogs being off-lead and easily caught in our lead. Sounds like you did all the right things. I'm sorry Stephen got hurt--it is easy to do trying to break up dogs. Probably good you got it looked at. Dog bites are like cat scratches. Easily infected due to the dirty nature of the mouth. A 60# dog definitely shouldn't be in a small-dog area. Maybe the problem was her dog tried to fight with bigger dogs and the owner couldn't manage her. Poor little puppies having such an experience.

Some peope don't deserve to have pets. I hope this hateful woman never has children. They would grow up to be playground bullies. Inga and Ollie are precious and have never had a negative experience or any harsh treatment, they have only known love and kindness. You and Stephen are doing such a great job with them. It hurts my heart that they had to experience such trama from such a crazy lady and her dog. They are so full of love and everyone that sees them think they are the greatest. I can't believe how fast they learn and how quickly they are growing. Every moment I spend with them is a joy.

Outrageous behavior. How dare you hold that ladies dog and spoil its fun in bullying your dogs!
I hope animal control track her down and take her dog in for testing, then fine her.