What does a poppy field mean to you?

Yesterday I posted a photo of a poppy field taken last month. I was completely shocked and then fascinated to read a comment that fields of poppies always bring to mind The Wizard of Oz. I have to confess that I'd never noticed there were poppies in the film! 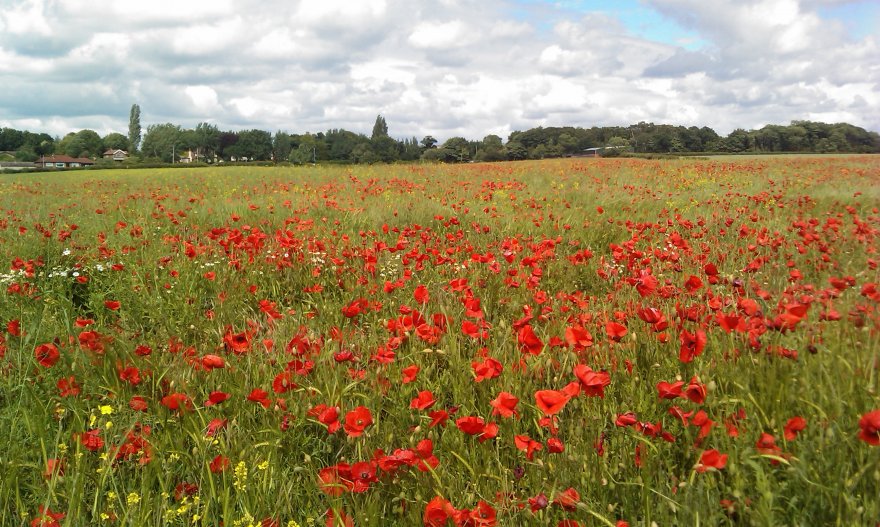 For me, and probably for most Brits, poppies are inextricably tied to the Flanders Fields of World War One. The poppy is the symbol of our Remembrance Day commemorations and we buy replicas in the weeks running up to 11th November to wear as a sign of recognition and respect for the millions who gave their lives so trustingly.

I've always been fascinated by many aspects of history, but this particular conflict has drawn me to it for several reasons. I studied Vera Brittain's "Testament of Youth" and the poetry of Wilfred Owen, Siegfried Sassoon and Rupert Graves in 6th form as a very impressionable 16 and 17 year-old and have never shaken off their power.

My maternal grandmother, born in London in 1908, told vivid stories of sleeping in Underground stations as shelters, of school friends being killed in the little-remembered bombing that took place, and most heartbreakingly of all, hearing the bells ring out in celebration of victory at 11am on 11th November 1918 as she was on her way to buy a remembrance card for her uncle and 2 year-old cousin who were to be buried that day, victims of the Spanish flu pandemic which she and her mother both survived.

My great-grandfather was killed in Perrone, France, on 20 September 1918, only a matter of weeks after his arrival there and left a widow and two young sons, the eldest of whom was my grandfather, then aged 8 and shown here on the left. 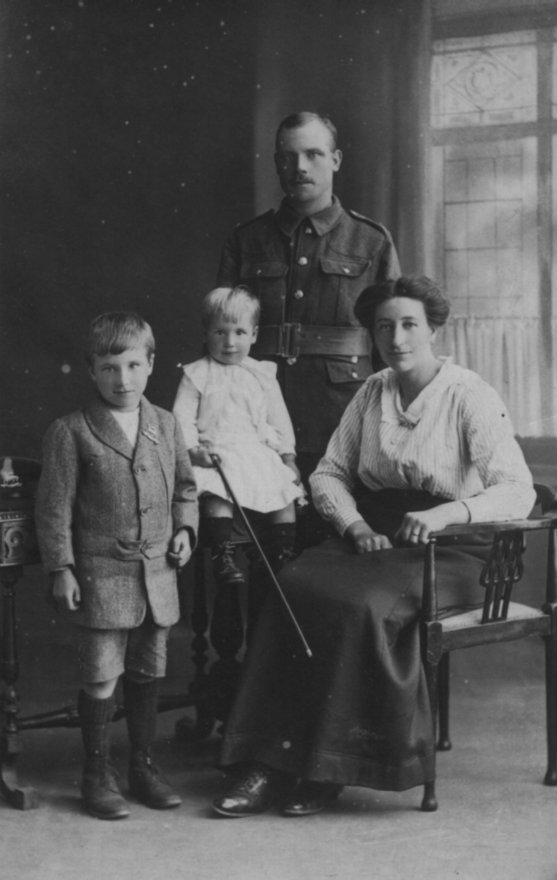 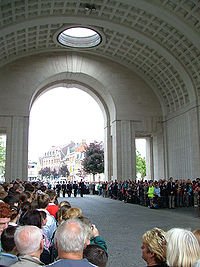 I visited Flanders myself aged 18 seeing the remnants of trenches, massive bomb craters, the bullet-scarred buildings and tree trunks which still stand, and graveyard after graveyard along every road. I was almost overwhelmed by the remembrance ceremoney at the Menin Gate in Ypres, Belgium. Missed only during the German occupation in WWII, at 8pm every night since 1928 the road is closed, everyone stops and the local fire brigade play the Last Post to commemorate the thousands of soldiers with no known graves who are listed on the walls and surfaces of the Gate. The atmosphere was electric and the lump in my throat unbearable.

And then we Brits are lucky enough to have another reminder too. I don't know if the Blackadder sitcoms were ever transmitted in the US, but you're missing an absolute masterpiece if not. Starring Rowan Atkinson, Stephen Fry, Hugh Laurie and others, the final series Blackadder Goes Forth, was set in a WWI trench and portrayed the lunacy of daily life there. The final scene of the last episode, "Goodbyeee..." was instantly hailed as a moment of television genius and continues to win critical accolades and viewers polls twenty years on. It had no closing titles, simply fading from the protagonists charging across no man's land under fire, to a field of poppies in the sunlight, a reference to the poem "In Flanders Fields". The music was also changed to a slow, echoey solo piano arrangement, finishing with three strong bass-drum notes, interposed with sound effects of gunshot, and later birdsong.

So this was what I thought of as I rounded the corner on a sunny June afternoon...

In Flanders fields the poppies blow
Between the crosses, row on row,
That mark our place; and in the sky
The larks, still bravely singing, fly
Scarce heard amid the guns below.

We are the dead. Short days ago
We lived, felt dawn, saw sunset glow,
Loved, and were loved, and now we lie
In Flanders fields.

Take up our quarrel with the foe:
To you from failing hands we throw
The torch; be yours to hold it high.
If ye break faith with us who die
We shall not sleep, though poppies grow
In Flanders fields. 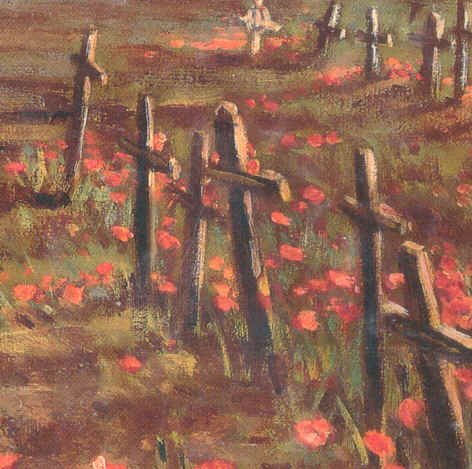 Blackadder is classic. I proudly own all 4 series on DVD.

I have to admit, my first thought was Wizard of Oz, so VimesFan, thank you for that remembrance and reminder. We always bought and wore those poppies on Veteran's Day but I hardly ever see them anymore. And the poem - I haven't heard or read it in years.

I was the one who thinks Wizard of Oz when I see poppies. Growing up in NC and not being exposed to fields of poppies--they were a novelty to me and were significant in the movie. I also remember my old Viewmaster and a set of discs with images of California and the poppies. Those two things were my first introduction to poppies in a field. Like Pegi, I remember wearing and seeing the poppies on Veteran's Day. I'm not sure but I think, when I came to NC for Grant's wedding which placed me in Mooresville on Veteran's Day, we saw a group of veterans and some were wearing the poppies in remembrance. I don't recall where we saw the group--it was downtown--but most of the guys were older so maybe the poppies still hold a reminder for them.

Great blog--thanks for sharing the images and your memories.

Poppies used to remind me of The Wizard of Oz also, until I watched the Seinfeld series. Now, they'll always remind me of the poppy seed muffins Elaine used to eat before she tested positive for Opium usage during the random drug testing at work.

That reminds me of a story of a co-worker who used to visit the prison and take a cake or desert bread to the inmates. She took something with poppy seeds once--in innocence--and was told they couldn't eat it or they might test positively on a drug test. I never forgot that.

Love the poppy seed stories, I had no idea! One of my staple bakes is lemon and poppy seed cake...

Thanks to all for your comments, it's very rewarding to get a response. We're only just starting to see fields of poppies here again as during the last 40+ years the chemicals used on the farms killed them off. Nature has obviously had the last laugh now we're trying to be more organically conscious.

We still have two survivors of WWI, Harry Patch who is known as The Last Tommy [having served in the Army] and Henry Allingham who was in the RAF. Henry has just become the oldest man in the world at 113, whilst Harry is a mere whipper-snapper at 111 who has been widowed 3 times.

I baked my son some lemon and poppyseed bread one time, and he ate way more than he should have at one sitting. He actually started feeling high!

!   Saturday, July 11, 2009
Year 2021, just finished Black Adder and was brought here searching for some comfort on the internet. What an amazing job done in all who co tributes to the final few minutes of that show. It destroyed me.