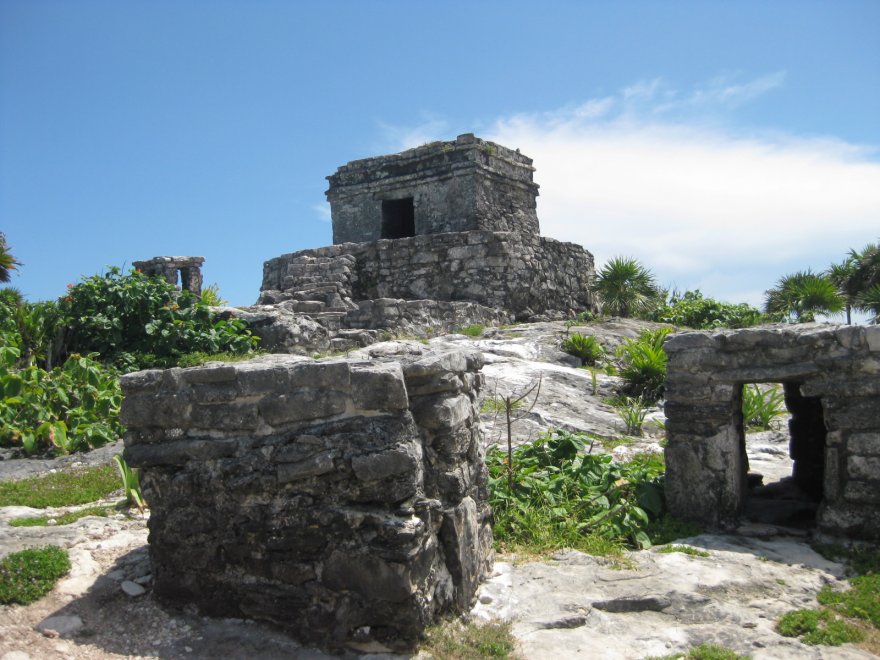 Monday morning, we got off the ship and stepped onto the island of Cozumel, Mexico. Joe booked an excursion for us to take a ferry to the mainland and then board a bus to the Mayan ruins at Tulum. What an awesome trip!!!

Our tour guide Jesus and our driver Jose were the nicest guys. They took great care of us and they deserved all the tips they got.

The ruins were absolutely gorgeous. We hiked around the grounds taking photos of the amazing sights. Then I had to sit in the shade for a few minutes, because it was 800 degrees with 5,000% humidity. ICK.

Luckily, Joe found the entrance to the beach! We walked down a ling, steep, wooden staircase hung on the side of a cliff, and down to the gorgeous white sand beach. The water was crystal clear, and bluer than anything we've ever seen. We could only stick our feet in the water, but that was enough to cool off.

The most amazing part was standing in the wide blue ocean with sand in my toes and looking up at the reminder of such an amazing civilization, hundreds of years old. The trip was totally worth the $89.

When we boarded the bus back to the Playa del Carmen port, we had time to do a little shopping. Joe got roped into buying three "Cuban" cigars for $20, which was AFTER haggling the guy down from $38.

I got my cookie in Key West, so it was time for Joe to get his souvenir purchase. He's been talking for months about buying cheap cowboy boots in Mexico. I'm not sure if he was more excited about the boots, or the haggling with the Mexicans part.

We know we can get a good pair of boots in the states for about $100, so I don't think Joe was willing to pay any more than $50 in Playa del Carmen.

Our tour guide, Jesus, took us on a little walk to the only store in town that sold cowboy boots. It was truly cowboy-esque.. but Mexican cowboy-esque. There were three guys sitting around a table eating lunch and playing cards when we walked in, and a little Senorita at the cash register.

They has "especial" on some boots for $99 on a table in the back. We found a pair we liked, and they fit him well. He tried his best to haggle with the girl and get her down to around $50, but she wasn't budging.

So, we put the boots back, thanked her for her time, and walked out of the store, fully expecting them to call us back and offer $75.

THEY DIDN'T CHASE US. So oh well, their loss. But it was sortof sad.

Next was time for some authentic Mexican TACOS!!! Our tour guide told us the ONLY place to get a taco is from a cart on the street. They are the best. So we took his advice and they were AMAZING.

I ordered mine with steak. The cook had two corn tortillas on the grill, and put a slice of cheese between them. Then he topped the tortillas with the steak. I fixed er up with some pico, not realizing what I was in for.

The taco was pretty steamy, so I carried it with me down the street for a few minutes waiting for it to cool off. I was wondering why all the Mexican guys in the store fronts were commenting on my food choice as we walked. They just sit outside their shop and say random things to you... And it was like they were in on some big joke that I knew nothing about, that had to do with my food.

So I found out that the joke was on me (gringo) when I took my first bite and flames started shooting out of my ears. Apparently they use more POTENT peppers than I am used to in their pico. So from that point I was at an almost run down the street to the store where our tour guide mentioned that we can get free shots of tequila.

ANYTHING TO CALM THE FLAMES.

I am sweating and my eyeballs are turning red, and I run up to the tequila cart and I am like fanning myself, and the two guys behind the cart are dying laughing. "Oh Si... Habanero, Senorita!"

Yes, clearly, I am now aware of that. Thanks.

So I downed three shots of tequila and slammed all the lime I could into my mouth until I was coherent enough to scrape the rest of that hot sh*t off my taco.

Once my mouth cooled down, I finished the taco in peace, and enjoyed the heck out of it.

I also bought a pair of flip flops for $7. Good stuff.

We headed back to the ferry and rode back to Cozumel where the cruise ship was parked. On the ride back, I heard my first full Justin Bieber song. With music video.

When we arrived back at the dock, there were only 8 MINUTES to spare before the ship was going to depart, so we booked it back to the gangway and got on just in time. It was a fantastic excursion, but we were thoroughly exhausted.

We got back just in time to get cleaned up for dinner and then we went onto our massage appointment! Dinner felt rushed, but our servers took great care of us and got us out of there in time for the appointment.

At dinner, we had the third couple join us (finally) at the table. They were a little "off".. and definitely picky, and almost impossible to please. Poor Neil the server practically bent over backwards to try and cater to their every whim. These people apparently don't realize that the wait staff is supposed to serve 1500 people simultaneously, all while learning names and drink orders and getting everyone fed and cleaned up and gone in time for the next 1500 people.

So sorry, No, they do not have time to bring you two entrees each, and two appetizers each, all at the same time. ESPECIALLY when you're going to take one tiny bite of the dish and push it aside. Plus, these people showed up 30 minutes late every night.

I'm not sure what they expected, but I was extremely annoyed. Apparently, Emily was too, because after they left the table, we were both like, "OMG those people are NUTS!"

Poor Neil looked like he might have a panic attack thinking that the other couple might give him below excellent on their satisfaction surveys. But it wasn't just Neil they complained about. They had something negative to say about pretty much everything on the ship. What a joy.

Sounds like a great day. Too bad about the boots. They must get a lot of tourists glad to spend $100 for especial. :)

I'm really enjoying reading about all your adventures, Betsy!