We headed up to the spa for our appointment, and were greeted by our two therapists for the couples massage and facial. "The Love Potion."

The oil they used apparently penetrates the skin to remove toxins from your muscles, which is pretty cool. The facials were relaxing too, but didn't do much good for my high school complexion. They put a pro-collagen mask on our faces with a brush, and let it sit for about 10 minutes. After it dried, it all peeled off in one piece, it was weird.

Joe got most of the mask stuck in his beard.

Afterwards, we went back to the stateroom and passed out.

We slept until almost noon today. We were both pretty tuckered after the long, hot day in Mexico. There were so many activities to do during our day at sea. Joe was most excited for his Texas Hold Em tournament. A $75 buy-in got you $1,000 in tournament chips. He had about 5 other guys at his table when they started. One of which was the cruise celebrity, a 22 year old kid who called himself "tic-tac." He was the winner of the belly flop contest earlier that day, and a proud member of the U.S. Air Force. He was a cute kid, and Good Lord he was getting good cards. When I first walked up to the table, Joe looked like he was cleaning everyone out. But a couple of hands later, Tic Tac had almost the whole chip stack.

About 30 minutes and $40 more dollars later, Joe was out of the tournament. But I know he had an awesome time playing, so it was worth it.

The Casino Royale on the ship took us for a combined $200 this cruise. But we had a great time playing poker and blackjask, and putzing around on the slot machines.

After the tournament, we went to lounge in the sun on the upper pool deck of the ship. The wind on the deck outside was about 35 knots according to the captain, which equaled about 60 mph.. It was hella windy.

The sun was straight above us, so our faces were in the shade and Joe got an awesome tan line straight across his chest. Very attractive. 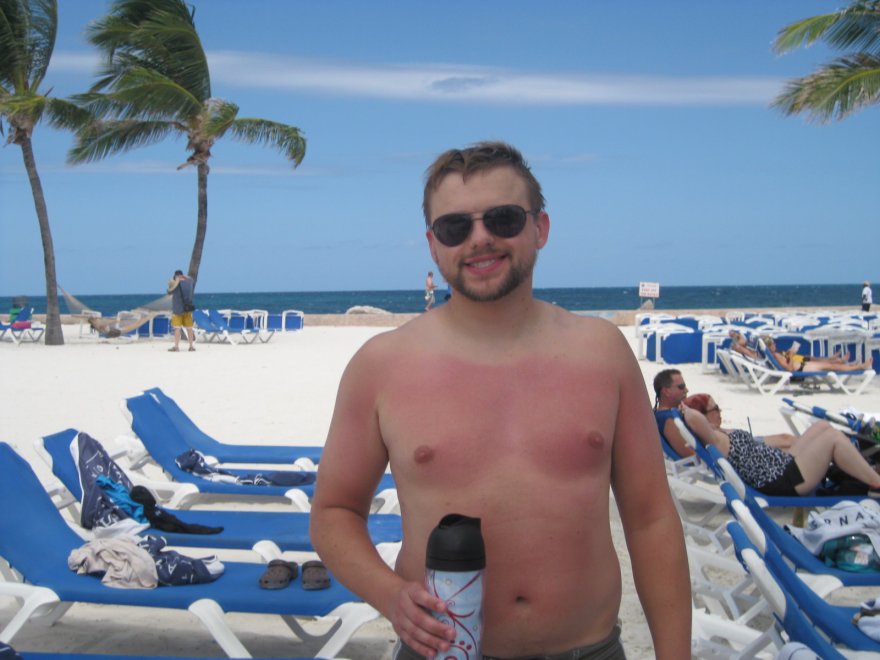 We participated in some trivia contests in the Schooner Bar, and we did REALLY well on the 50's music trivia. We also hit the Solarium pool INDOORS for a little while. Much less windy.

Dinner that night was an Italian theme, and during dinner, the hundred or so waiters gathered on the grand staircase and serenaded us with a multi-accented version of "O Sole Mio." It was so cute. Some of the waiters were singing into pepper grinders like microphones.

Sounds like you had an awesome trip! Did you do the rock climbing wall?

No. Unfortunately. The hours of the climbing wall were really weird. Always while we were off the boat at one of the ports.