Joe and I have officially adopted another cat.

Please welcome, Dakota. Our new BOY cat (much to our surprise) with black and white spots, all his claws and a silly attitude. Dakota sortof adopted us first. He started coming around our house when we first moved in, and the neighbors told us that a family who used to live in the neighborhood just moved away and left him. We didn't like him being outside and getting beat up by the other cats WITH their man-parts still intact... so he's become our kitten. 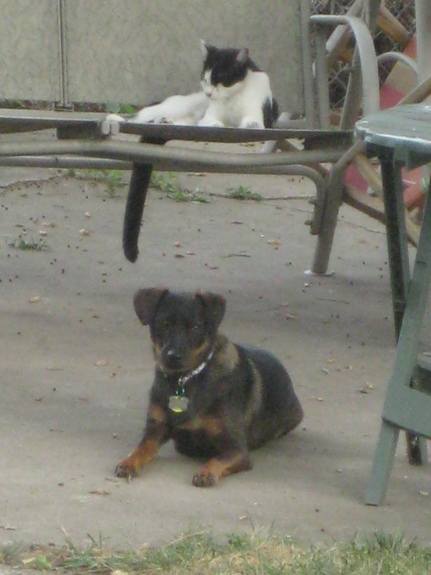 Fargo the Dog and his new pal Dakota (get it?)

The Alley Cats non-profit that catches cats, snips them, and returns them to their neighborhood got ahold of Dakota, so one of his ears is clipped to mark that he's been fixed. This is a great idea to control the animal population, but needless to say, to drop a cat back into it's crappy outdoor environment in a high-traffic neighborhood without one of it's natural defenses is a little whacko.

I have mixed feelings about this organization. The ideal thing, if you ask me, would be to catch the cat, fix it, and then take it to a shelter to get adopted. That way, the cat will have a chance at an actual life. Instead of getting it's ass kicked by other cats in it's neighborhood and then hit by a car.

On Sunday, Joe and I hunkered down and finally took this cat to the vet. He's been in our house for weeks now, and who knows what diseases and what-not he's carrying around, so we decided to just suck it up and grab him. He's extremely skittish from getting beat up all the time, and might've been abused by his former people, since he's VERY slow to trust us.

So Joe and I had to drug him and wrestle him into the cat carrier, and he was making these awful noises like a human baby all the way to the vet. Once we got him to the Dr. he calmed down a little, if he could just hide his little head in his blanket. It was so sweet.

So, Dakota has been poked, prodded, pinched, chipped, stuck, medicated, registered, flea-bathed and all that jazz, and he's officially our new baby.

Joe pretty much escaped the ordeal with few injuries. I have scratches all over my chest, stomach and arms, and one of my fingers is almost out of commission with a deep scratch that was bleeding all over the vet's office. But we are so happy to have a healthy, safe warm cat. Especially since winter is coming.

Dakota is one lucky cat.

Betsy, I always thought you were an angel. Now I know for sure!!! I think people like you and Joe are the best people on earth. Thank you for this heartwarming story! God bless you and Joe and God bless Dakota....and Fargo too, of course!!

We're keeping two of Sally and Andrew's cats right now, and one of them was rescued by Andrew from a downtown parking garage. She was just a little kitten. I look at her every day and think about how lucky she was that a very good person came along and rescued her, and Sally welcomed her into her home where they already had three cats! God bless all the very good people in this world!!

Thanks !Heinzel. I sometimes just look at my animals and I am so thankful that God put us together.

You are so sweet and to be allergic to animals and still bring them into your home when they need one. I'm glad that Dakota has a warm loving home. :)

Sammy Cat would make insane noises anytime we had to move him from one place to another... you think he was dying or something. It was pretty scary to get him into a pet taxi.

I understand what you are saying about the feral cats but the truth is that there are just too many to take into shelters. It seems like every where we have lived we have met "cat" people who take on the task of trying to help the feral cat populaion and neutring is really essential. I hate to see one dead along the road but these folks are doing their best. All of our family animals ar adopted one way or another and I am glad we have been able to help. Just wish people would be more responsible. I hope Dakota brings you many happy times!