Tom Green is the O.G. of Reality Comedy 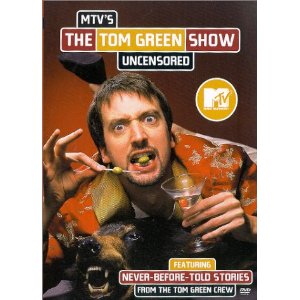 Can I rant for a minute?

Tom Green is in Louisville today. He's playing at Louisville Improv tonight, and he's at 84WHAS today on air with Terry Meiners. He just walked past Joe Hall's cubicle.

I just want to talk about my respect and gangsta love for Tom Green.

He was breaking ground and stretching the limits of comedy WAY before people like Johnny Knoxville and Bam Margera. Tom Green is the O.G. of reality comedy.

Unfortunately, he was just way before his time. His creative genius went right over the heads of most people in my generation. We were too busy graduating high school, I guess. Since that was so difficult and time-consuming.

Tom Green was screwing with people and harassing his parents way back in the day. My all time favorite Tom Green creation is the "Undercutters Pizza" skit. Seriously, Google it. Pure genius.

Unfortunately for Tom Green, Jackass copied his style at just the right time, when the Millennial Generation was old enough to watch TV without mommy knowing what they were watching. Posers like Knoxville and Margera were able to cash in on an entire demographic of under-achievers, while Tom Green sortof faded into the background.

You can bet your kiester that I know who started the trend. I am one of the Tom Green fans who recognizes his genius. You can tell him that too. I think he's the man.

I would be honored to have his bum on me.

I love Tom Green, but not for the reasons you mention here. He saved my husband's life. Seriously. I'm forever in his debt.