What's With the "Rosie Riveter" Thing?

Hello Humzooers! I decided to write an "about me" blog. Not like anyone's asked why my page is plastered with Rosie the Riveter, but I figured I would tell you a little about the meaning behind it. 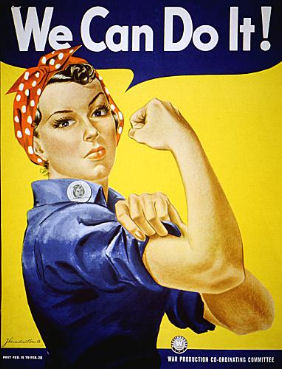 If you aren't familiar with Rosie the Riveter, let me give you some background. Rosie is a character created during the WWII era as part of a propaganda campaign to encourage women to join the workforce. There are several interpretations of the symbol, but the most famous is a 1942 painting by J. Howard Miller, which was based on an actual Michigan factory worker named Geraldine Doyle (which, incidentally, was mistakenly associated with Rosie the Riveter, but associated nonetheless).

Rosie became a cultural icon, and a symbol of patriotism for women and men. She represented the idea of American perseverance through a difficult time in our country's history. During WWII, six million women went to work to keep this country going while so many American men were overseas fighting in the Pacific and Europe.

I have always been fascinated and empowered by these women who stepped up in the face of adversity and did their part for their country, their families and their husbands & sons. My grandmother was one of them, and she has always been an inspiration to me throughout my life.

I have adopted Rosie the Riveter as my personal symbol to model my life after. I have always tried to make the best of life, no matter what situation I am in, and it has been my goal to always succeed and never give up, regardless of the challenges that are placed in my path.

That is what Rosie means to me.
Nothing "feminazi." Just the good ol' American "Git er Dun" attitude.
Girl Power, if you will.

When I was aaaaalmost 18, I decided that I wanted a tattoo of ol' Rosie. I had to have my mom come with me and sign a consent form, since I wasn't quite "of age." Which was pretty cool, on her part... I have a pretty cool mom.

I have pictures from the original tattoo sitting, but they are all blurry and crappy, and depressing because I was much skinnier then.

So, rather than digging up the past (haha) I will show you some more recent photos when I went to have Rosie re-inked in 2006. She was looking a little shabby, so in the spirit of Bike Week in Daytona, I skipped out of work one day with a friend and drove to Mouse & Tony's Tattoos in Deland, FL.

I was totally nervous because I was so happy with the original, that I didn't want her to get screwed up. I pulled out my old, bent up Rosie the Riveter postcard and Tony went to work. I should've trusted him at the beginning, because the finished product was absolutely brilliant. She looked better than ever, and she's still going strong.

Here I am, smiling through the pain while Tony works his craft: 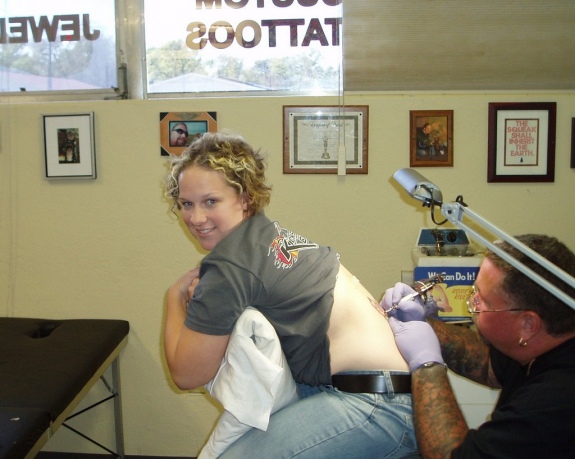 Tony the Tattooer did an amazing job. It seemed like it took FOREVER, but it was well worth it. I didn't remember tattoos being this painful. It hurt much worse the second time around. 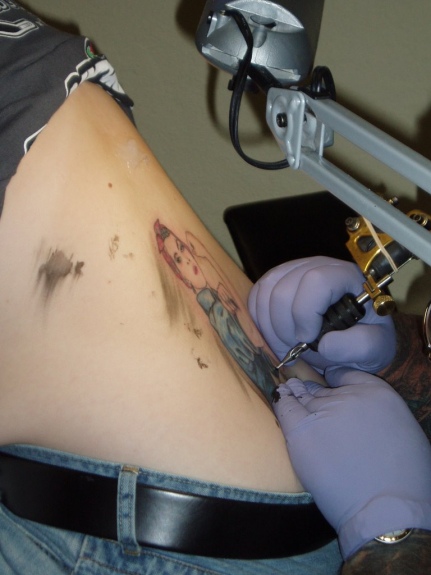 Here is an amazing before & after photo that I used in my old blog about the momentous occasion. I took this photo after Rosie had some time to heal. I couldn't have been happier with the finished product. 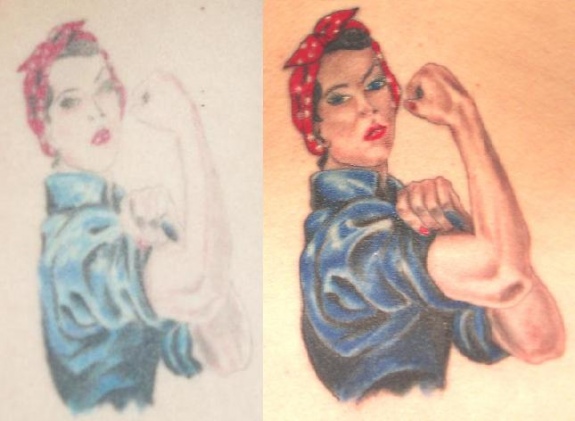 If you're even in Deland, FL and feeling a little "crazy," I would definitely recommend Mouse and Tony's for all your tattoo needs.

Looks great but wouldn't you rather have her somewhere you can see her? Even with a mirror I can imagine its pretty tricky to see.

I remember Deland and Rosie. And momma G is pretty cool in my book too.

+1 to your mom!
Cool story. The re-touched tattoo looks sharp!

SallyPants   Wednesday, May 21, 2008
i love rosie! but i love your tattoos on your big toes even better.

Rosie is a great icon. I've also heard more of the story where the women who did this amazing job were quickly replaced when the men returned--with no options to stay even if they wanted to stay. I can understand the men deserved their jobs back after serving our country but I also think the women should have been treated more fairly or at least more gently after their great accomplishment. They were before their time wanting to work out of the home and possibly some of them needed this job when their husbands, fathers, and/or brothers didn't returned. I'm not a big fan of tattoos but yours is very cool and has a great meaning and history!

Cool story. Being a complete outsider, I wondered if there was a story behind your use of Rosie.

I am a firm believer that you should only get a tattoo if you can look back when you are 80 and remember why you got it in the first place. I have two and they both mean something to me, that I will remember forever. I have a third one planned, but that will be all for me. Rosie is definitely an icon to hold on to and a great source of empowerment. Beautiful tattoo Betsy.