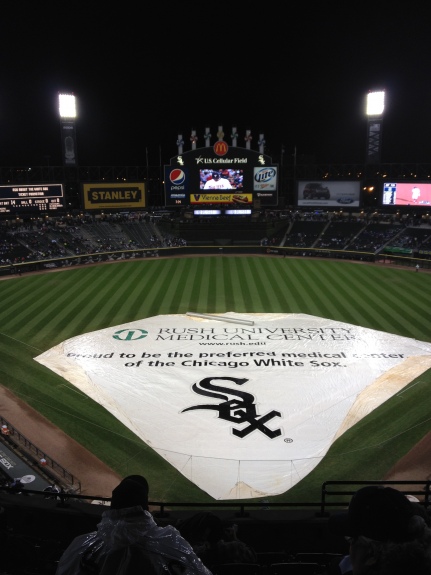 Rainouts are always a bummer. On occasion, Mother Nature will interfere with baseball games played in open-air parks. But when rain prevents a marquee pitching duel to determine a divisional race, that's pure disappointment.

Last night, four of us had tickets to see the final regular season game between the Detroit Tigers and Chicago White Sox at US Cellular Field. None of us wrestled with the decision to see the game. It was scheduled opposite of the Chicago Bears and Green Bay Packers Thursday night game, but it was Justin Verlander (13-8, 2.91 ERA) vs. Chris Sale (16-6, 2.88 ERA). Of course we were going. You never know when you'll be in attendance for an outstanding pitching performance. Last year, I was fortunate to attend two.

Besides looking forward to the pitching matchup, last night's game had the potential to determine whether or not the White Sox or Tigers will advance to the playoffs as the American League Central Division champions. The White Sox held a one-game lead over the Tigers. With a win, the Sox would have moved two games ahead. With a loss, the two teams would be tied. The game was rescheduled for next Monday, but none of us can make it. We're all too busy at work next week.

Not too much baseball left.

I'd love to see rain again. Tired of looking like California and having to water the lawn so much to keep plants from dying.

We've had some rain lately. Enough to compensate for our drought this summer? Probably not.

You can always play Words With Friends while you waited.