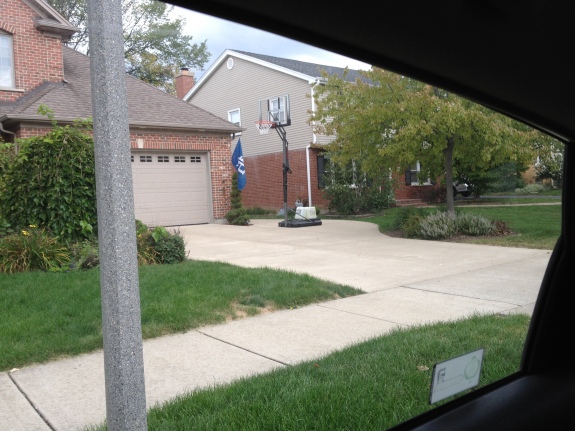 More than one month passed since I updated the Team Game. For a quick refresher, here's the Team Game that Susan and I play while attending MLB games. On Humzoo, I'm playing a modified version. I'm attempting to spot all 30 Major League Baseball team logos while I'm out and about locally. Nothing that belongs to either us will count. I'll have to uncover Chicago Cubs and Milwaukee Brewers logos elsewhere.

Located just a few blocks away from our house in Elmhurst, the owner of this home must be hanging his head and rifling over the remaining regular season schedule for the Tigers. Will they still have a shot at the AL Central title? Is one of the two AL wild card spots more likely?

The Chicago White Sox played host to the Tigers this afternoon to make up last Thursday's rain out at US Cellular Field (Curses! I had tickets to that game). The fate of the American League Central hinged upon that game. Both teams separated by a lone game in standings were set to have their aces square away: Verlander vs. Sale. Mother Nature picked up a decision that evening. The Sox proceeded to sweep the Minnesota Twins in Minneapolis, and the Tigers claimed two of three from the Cleveland Indians.

This afternoon, the Tigers took the field trailing the Sox by two full games. With a win, they could inch closer, but a loss would provide more breathing room for the division leaders. Despite trailing 3-0 in the third inning, the Sox grabbed a 5-4 lead in the fifth inning, a lead they wouldn't relinquish. Following today's win, the White Sox now have a slightly more comfortable three game cushion over the Tigers. There's still some baseball left to be played, but the playoffs are just around the corner.