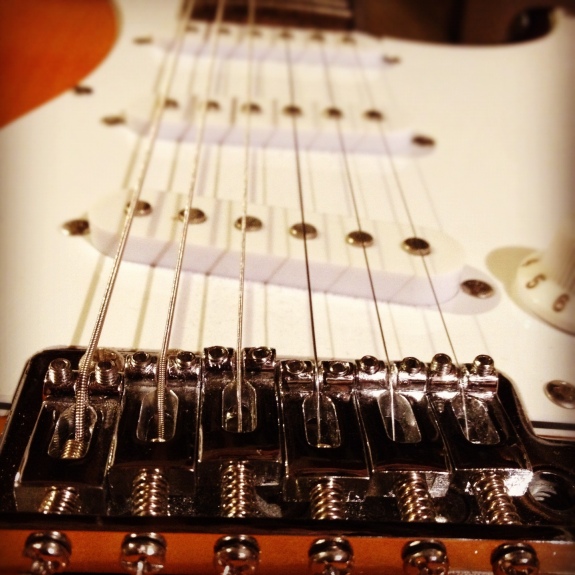 Around Thanksgiving last year, I made the decision to quit kicking myself for not sticking with music lessons. In third grade I played the saxophone, and then in sixth grade I played the clarinet. For years I listened to and believed every possible excuse. I'm too old to start. It's too challenging. It's intimidating.

So I took the first step. I emailed a friend and former coworker who is a fantastic musician. Name an instrument and he can play it. Proficiently, too. He referred me to a friend of his who teaches guitar. In fact, they played together in a hair metal band during the late-1980s. He promised that not only would he teach me how to play, he would teach me about music, too.

One year ago tonight I broke down and entered the music shop. Yes, I was nervous. Yes, I was intimidated, but I talked with the instructor about my musical interests and minimal experience. We walked around the shop and looked at the instruments on the walls. I gave in and signed up for weekly lessons. I also walked out of the store as the owner of a guitar and amp.

It's hard to imagine how much I've learned in one year. By no means are these lessons easy. Quite the contrary. They are extremely challenging, but fun. I know far more in one year than I expected. Barre chords still give me grief, but I'm coming along.

Bill: Never give up on something that you really want to accomplish. Great coaches will tell you that accomplishment is 95% Desire and 5% Ability.

Thanks, Bean. It's challenging, but I'm plugging away.

Eventhough you did come close to burning a building.

I think it's great that you started!