I'm not sure what's more perplexing, the fact that I'm attending only my fifth game this season, or that I don't have tickets for any upcoming games this season. I think it's safe to say that I'll get to more games before this season ends. Double digits would be nice, but I'm not sure that'll happen.

We're traveling to Miller Park today to watch the Washington Nationals (53-56) battle the Milwaukee Brewers (46-63). The Nationals find themselves trailing the Atlanta Braves in the NL East by 11.5 games. The Brewers are buried at the bottom of the NL Central, 19 games behind the Pittsburgh Pirates. The Brewers won't be playing in the postseason, but the Nationals have an outside shot at one of the two National League wild card spots. They are currently in fourth place in the wild card standings behind the St. Louis Cardinals, Cincinnati Reds and Arizona Diamondbacks.

The Nationals will send Dan Haren (5-11, 5.49 ERA) to the mound. Haren, a former three-time all-star pitcher, has fallen upon hard times since joining the Nationals in 2013. The Brewers will counter with Donovan Hand (0-2, 3.56 ERA). Hand, normally a relief pitcher, was moved into the starting rotation due to injuries. 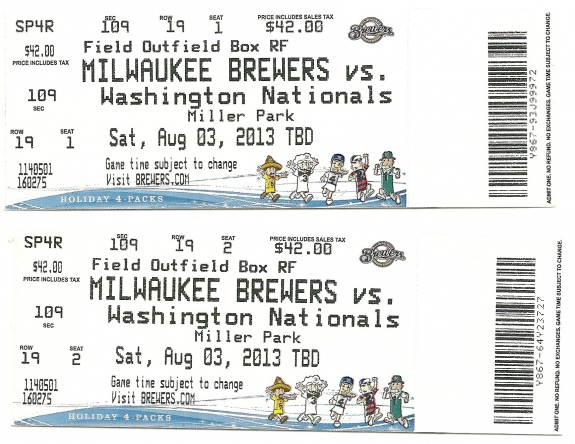