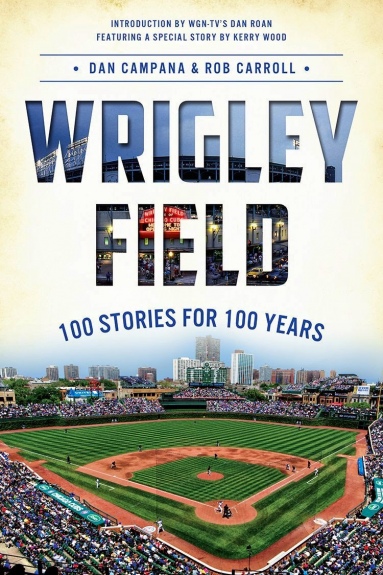 As a Chicago Cubs fan, I've spent ample time at Wrigley Field. From keeping score the old-fashioned way (with a pencil and scorecard and no apps), to hanging out with friends, to guiding people around the ballpark during their inaugural visit to the so-called Friendly Confines, I could fill a book with 100 unique stories. My tales would contain on-field adventures like being in an upper deck seat relishing the Cubs victory over the San Francisco Giants during the 1998 National League Wild Card Tiebreaker. Some tales would take place outside of the park, like when my friend's car died at the corner of Bell and Addison and turned into a very long night. Some stories would focus upon a White Sox fan who shared a unique confession. All of these stories are a part of Wrigley Field's mythology.

Since Wrigley Field celebrated its 100th anniversary in 2014, I purchased as many books as I could that documented the ballpark's transformation from a simple Federal League facility to a baseball icon. The book Wrigley Field: 100 Stories for 100 Years, written by Dan Campana and Rob Carroll, documented tales from 100 diverse people including casual fans, season ticket holders, broadcasters, street vendors and former players. The tales shared highlighted memories of specific games, when fans met their eventual significant others in the bleachers, and former players' interaction with fans. Everyone who ever set foot in or around Wrigley Field has a tale to tell.

While the book was a quick read, I felt it focused too much on recent tales. For a ballpark that is synonymous with nostalgia, a majority of the stories were set in the 21 century. While I cannot imagine too many people can claim to have seen the Chicago Whales play on the north side, I did expect to read more stories about the early days. Even tales of the 1969 team seems too recent for the ballpark that predates the sinking of the Titanic.

Being a baseball junkie, I did have one significant issue with the book. I did notice several factual errors. Publications often feature typos, and as a blogger, I've certainly made my share. I can look beyond those. But factual inaccuracies are disturbing. One story mentioned that the Cubs were leading their division, the National League Central, in 1989. Not true. The Cubs were in the NL East from the advent of divisional play in 1969 through 1993. The three-division format, which introduced the NL and AL Central, was not created until 1994. The other glaring mistake were multiple references to the Andre Dawson beaning at the hands of Eric Show and the San Diego Padres. The book made multiple references to the game being played in 1988, the year lights were installed at Wrigley Field. I was in attendance at that game. It was the day of my first baseball fight, and it took place on July 7, 1987.

If you are casual fan looking forward to a light read about Wrigley Field, this book is for you. If your intent is to learn something new about the Friendly Confines, this collection will fall short of expectations.