Since we are in the midst of a basement transformation project, we've decided to painstakingly rifle through myriad boxes that we assumed would never again see the light of day. While this task has driven me to edge of sanity, I did unearth several old floppy disks from college. Much to my surprise, several documents survived the conversion from archaic file formats to usable text. 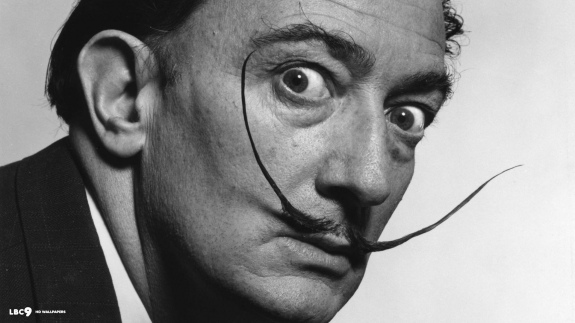 A new style of art called "Surrealism" developed in the early 20th Century. Translated from French, surrealism means: above and beyond realism. Based on the theories of Freud, this approach spanned the period between World Wars I and II for the most part, though surrealistic elements had appeared throughout the history of art, and still do (Zelanski 440). Surrealism was not developed by visual artists, but by rebellious writers. Surrealism is a collective adventure that began in Paris shortly after the first World War, in the form of an association of individuals grouped around Andre Breton (Cardinal 9). Among the artists to participate in Surrealism were: Giorgio de Chirico, Yves Tanguy, Max Ernst, Andre Masson, Rene Magritte and Salvador Dali. The Surrealist movement was greatly influenced by the theories of psychologist Sigmund Freud, whose interest was dealing with the unconscious self. Surrealists often dealt with the id, ego and superego. The id is the part of the unconscious that is the source of instinctive energy. The ego is the part of the psyche that reacts to the outside world. The superego mediates between the id and ego. Freudian concepts such as taboo, repression and the censor were a useful contribution to the surrealist critique of bourgeois regime (Cardinal 17). Surrealism often relies on unusual perspectives and symbols to express the apparently realistic, but logically impossible content of dreams (Zelanski 440). Surrealism features juxtaposed objects, exaggerated emotions and objects of the imagination. Surrealism dominated art for two decades, during which it succeeded in broadening the range of acceptable subject matter and techniques (Collier's 663).

Salvador Dali was greatly influenced by the works of the early Surrealists. The two Surrealists who influenced Dali the most were Giorgio de Chirico and Yves Tanguy. At seventeen years of age, Dali went to the School of Fine Arts in Madrid, where, along with Luis Bunuel and Frederico Garcia Lorca, he was active in a group of rebellious young students (Henning 98). Trained as an academic painter, Dali combined academicism with the influence of de Chirico and Tanguy to produce fantastic hallucinatory images in a realistic style (Collier's 662). Dali painted objects realistically in order to render his visions convincing (Collier's 662). Dali has said his ambition was to make his paintings hand-made photography in color (Henning 98). At the time photographs were black and white. The invention of color film was yet to come. The images that appear in Dali's work seems incredibly life-like. In the work of Salvador Dali, the influence of de Chirico, a metaphysical artist, is evident between the years of 1929 and 1938 (Carra 179). Subject matter contained walls and arches in perspective along with outsized shadows. Dali was influenced by Tanguy's dream-like settings that featured non-objective symbols.

After futurist and cubist phases, Dali entered the ranks of surrealism (Waldberg 106). Salvador Dali learned of the Surrealist movement around 1927, while still in Paris, through magazines and other publications (Picon 134). As a Surrealist, his work was hailed with enthusiasm (Waldberg 106). When Dali introduced himself to Surrealism in 1929, nothing strictly personal had been foreseen or predicted in his previous work of realistic landscapes (Waldberg 85). Dali's greatest contribution to the Surrealist movement was the "paranoiac-critical" method. It was in 1929 that Salvador Dali fixed his attention on the internal mechanisms of paranoiac phenomena (Waldberg 91). Dali's "paranoiac-critical" method substituted for the passive conditions of self-induced hallucination favored by the early surrealists (Tate Gallery 3-4). Dali proposed a state of mind that was permanently disoriented from the outside world (Chipp 375). The Surrealists did not conceive paintings through the "paranoiac-critical" method. This method went a stage beyond those of even the most radical of the group (Chipp 375). Dali described this "paranoiac" activity in his 1930 book entitled, La Femme (Chipp 374-375). Much of Dali's subject matter dwelled upon childhood memories. Dali was extremely precocious as a child, showing decided symptoms of an overexcited state of mind and being given to violent hysterical outbursts (Chipp 374). In later life, he became obsessed with memories of these early experiences and transcribed them into his paintings (Chipp 374). His painting employed academic technique to convey infantile obessions (Waldberg 106). Dali's multiple images, organic distortions and animation of the inanimate convey the anguish induced in dreams through constant flux and transformation of form, and his iconography draws from the sexual obsessions of the paranoid subconscious (Tate Gallery 4). Iconography is a representation of ideas through pictorial imagery.

Over Dali's extensive career as an artist, he created a number of surrealist masterpieces. In 1928, Dali collaborated with filmmaker Luis Bunuel and created, Un Chien Andalou. This surrealist production was like a bad dream in itself (Zelanski 440). The opening scene features a woman getting her eye slashed open with a razor blade. If not for the Surrealist movement, this film could not have existed. Un Chien Andalou widened the possibilities for film subject matter. In 1931, Dali and Bunuel would collaborate to create L' Age D'or, another outrageously eerie motion picture.

Dali's most recognized work of art is his 1931 painting entitled, Persistence of Memory. In Dali's Persistence of Memory, melting watches, lightstruck cliffs and unrecognizable forms are meticulously described, as if in a vivid hallucination (Zelanski 440). This painting is on display in the Museum of Modern Art in New York. The melting watches represent the relativity of time. The setting is the open fields of Spain.

Salvador Dali, along with other Surrealists, was greatly influenced by the theories of Sigmund Freud. Freud believed that people's real thoughts were hidden in their unconscious minds and in their dreams (New Book 394). In many of Dali's paintings, the subject matter are Freudian symbols. Dali made greater use of Freudian symbols than any other Surrealist painter; and Freud was more interested in Dali's work than in other Surrealist's works or theories (Henning 98). Dali often repainted his father's head in his works (Henning 101). These images might refer to feelings about his father and childhood. In the Freudian concept of the Oedipus Complex, male offspring resent their father. The heads of women commonly appear as a pitcher. A woman's head that is shaped like a pitcher symbolizes women as a vessel (Henning 101). Women were thought of this way because they gave birth to the children. Women could also be found as a chest with drawers or as a cabinet (Henning 104).

In Dali's painting, Cardinal, Cardinal, the small flock of birds feeding on crumbs in the left foreground are surely not there for compositional reasons (Henning 104). Ants, like those in Persistence of Memory and Nine Images of Lenin on a Piano, symbolize sexual desire and gustatory eroticism (Henning 101). Salvador Dali, through his meticulous and delirious Freudian compositions, gave rise about 1929 to what Andre Masson called "surrealist naturalism" (Waldberg 38). Dali had the uncanny ability to take an object in its natural form and transform it into something deep and thought provoking without changing its physical form.

Andre Breton, the writer who invited Dali into the Surrealist movement denounced him in 1936. From 1936 on, the work as such, according to Breton, "was no longer of any interest to Surrealism" (Picon 141). Dali began to give into commercial ventures and sold himself for dollars. Dali referred to his admirers as "swine" (Henning 106). Paintings began to sell for extraordinary amounts of money, making Salvador Dali a rich man. Dali acquired a universal reputation as a result of constant self-advertisement and social scandals (Waldberg 106). The major reason why Breton denounced Dali was for his reactionary beliefs. In the face of Surrealism's dalliance with Communism, Dali accepted the Cross of Isabella the Catholic from Generalisimo Franco and was reconciled with the Catholic Church (Henning 99). Dali also became obsessed with the figure of Adolph Hitler (Henning 99). Although Dali was later excommunicated from the group by Breton, his extraordinary brilliance as a theoretician and his rich invention injected new energy and ideas into the movement at the moment when it was beginning to lose its initial impetus (Chipp 375).

After Salvador Dali was denounced, he fell out of sight. He continued to paint until his death, but none of these later works were as famous as his earlier works. In 1954, he created a painting entitled, Disintegration of the Persistence of Memory. This painting was similar to his 1931 original, but featured the landscape being destroyed. In 1982, Dali was named the marquis of Pubol by King Juan Carlos (Collier's 658). In 1984, Dali suffered severe burns in a fire at his home (Collier's 658). After this accident, Dali lived under twenty-four hour supervision until his death on January 23, 1989 (Collier's 658). Dali was laid to rest in the rotunda of the Dali Theater-Museum in Spain (Collier's 658).

In 1987, the Salvador Dali Museum opened in St. Petersburg, Florida. The Salvador Dali Museum houses the largest collection of Dali's works in the world, containing ninety-three oil paintings, two-hundred watercolors and drawings, over one thousand graphics and many sculptures and objets d'art (Dali Museum 2). The Dali Museum contains a 2,500-volume library on Dali and Surrealism (Collier's 658).

Salvador Dali, a brilliant, yet controversial artist, is the true master of Surrealism. His unique subject matter, flamboyant lifestyle, methods of creation and his outrageous appearance bring the character of Salvador Dali to life. Dali's startling clarity and technical precision seem to shock and fascinate his many admirers (Henning 102). Salvador Dali now ranks among the greatest art pioneers of all time. Post-humously he enjoys the recognition he decidedly deserves. He is the greatest pioneer of Surrealism, due to his discovery of a new dream world (Carra 178).