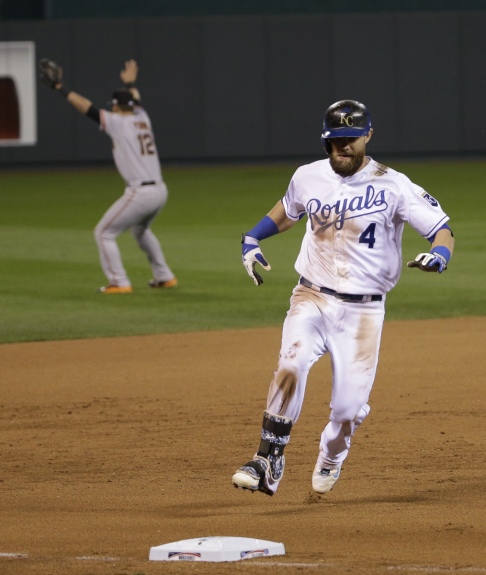 Imagine what raced through Alex Gordon's mind as he considered rounding third and heading for the plate. Will the Kansas City Royals defeat the San Francisco Giants to claim their first World Series title since 1985? Will he be obliterated in the media if he's thrown out at the plate? Will his split-second decision be second-guessed as too aggressive?

We will never know because Gordon slammed on the brakes 90 feet shy of home.

Imagine what raced through Madison Bumgarner's mind as Gordon lumbered around the bases. Could Gordon stretch a hit into a single and a three-base error to tie Game Seven of the World Series at 3-3? Will his historic postseason pitching performance be for naught?

Again, Gordon slammed on the brakes 90 feet shy of home.

Imagine what raced through Buster Posey's mind as he prepared to block home plate and prevent Alex Gordon from scoring the tying run. Was Posey gun shy since he suffered the severe injury that prompted the newly implemented home plate collision rules? Would he make the game-saving play to secure the Giants' third World Series title in five years?

Gordon slammed on the brakes 90 feet shy of home, so we'll never know.

That was the scenario the last time meaningful baseball was played. An exciting World Series ended just short of legendary. With the tying run standing on third base and two outs, Salvador Perez fouled out to Pablo Sandoval to end the game.

Should the Royals have waved Gordon around and sent him home? I say yes. In the moment I said yes, too. Conventional wisdom leans toward no. Nate Silver analyzed that play. He crunched the numbers and the odds were stacked against Gordon scoring. But that was during the World Series. The ninth inning too. The ball skipped past the outfielders. Gordon had no right being anywhere but stranded on first. Many factors needed to work. The two Giants outfielders were Gregor Blanco and Juan Perez. We're not talking about Willie Mays. Would they have fired a cannon and gunned the runner down at the plate? Would they have hit the relay man who in turn would have nailed Gordon at the plate? Would all these players make the correct play after several defensive miscues? With baseball history on the line, would everyone remain cool under the pressure?

I think Alex Gordon should have attempted to score. Then again, we'll never know.