Back in 2012, I started playing an elaborate version of the Team Game that Susan and I play when we attend Major League Baseball games. We try to spot as many of the 30 MLB team logos as we can. On this blog, I've started locating all 30 logos out about in the real world away from the ballpark. Simple, huh? Seeing the 2015 season is a mere five days away and I still need to find 13 teams, this challenge isn't as easy as it seems.

So what's taking so long?

At the ballpark, the rules are fairly loose. In fact, there aren't any. Just spot a logo and cross it off the list. For the online version, I decided to increase the difficulty. First, logos on clothing do not count. Too many kids walk around town with their little league caps on. Too easy. Second, nothing that I own counts. If so, this game would have been over without leaving our house.

Which teams are left?

Of the 30 teams in baseball, I've found 17 logos. While I am past the halfway mark, there are still 13 teams left. Of the six divisions, none are complete. The American League Central and National League Central are closest. Only one team remains in each of those divisions. For some reason, I just cannot find the American League West. I noticed the Los Angeles Angels of Anaheim logo when we were in California last summer, but that's it. Just five National League teams remain and eight in the American League. So this season, my mission to find these logos. 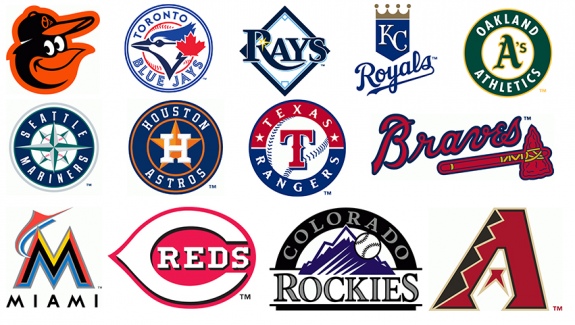