With only one month remaining in the regular season, the Chicago Cubs are knee-deep in a pennant race. A National League Central title appears out of reach with the St. Louis Cardinals and Pittsburgh Pirates holding the top two spots respectively. Currently, they maintain a comfortable eight-game lead over the San Francisco Giants for the second National League wild card spot. Over the course of the last week and a half the Cubs have stumbled. Jake Arietta's no-hitter against the Dodgers at Chavez Ravine and the destruction of the Arizona Diamondbacks on Friday are exceptions. I almost hate to mention that Ken Holtzman pitched a no-hitter preceding the infamous collapse in 1969. During the last week they dropped two of three against the NL West-leading Dodgers then dropped two of three to the lowly Cincinnati Reds who are currently buried at the bottom of the NL Central. Despite the recent downturn, the Cubs still control their destiny down the stretch. And they have managed to keep the Giants at bay. As a result, the Washington Nationals leapfrogged the Giants in the wild card standings and trail the Cubs by seven and a half games.

But destiny can be an ugly word at Clark and Addison. Even people who cannot tell the difference between Rogers Hornsby and Bruce Hornsby know the Cubs have a sparsely decorated trophy case at Wrigley Field. History is clear. The Cubs have only won two World Series titles in the franchise's 139-year history. One in 1907. The other in 1908. Wrigley Field, the 101-year-old ballpark that the Cubs lovingly embrace and call home, wasn't even a blueprint. Despite lacking World Series trophies, people often forget the Cubs were a National League powerhouse in the gap between the two World Wars. They won the NL pennant four times during the 10 seasons comprising 1929 through 1938.

With the possibility of postseason play returning to the so-called friendly confines of Wrigley Field, I wanted to know how the Cubs fared historically during the postseason at Wrigley Field. So I crunched the numbers.

Seven wins. Only two of which were World Series games. So I widened the net to capture the entirety of the Cubs' postseason history in Chicago. The grand totals were not much better: 12-28-1, .293.

Since the Cubs appeared in the 1906 World Series, they have played 41 home games during the postseason. Of those 41, they only won 12 of them. That is one dozen wins in more than a century. But here is a more detailed breakdown.

From 1906 through 1910, the Cubs called the West Side Grounds home. While playing there, they appeared in four World Series winning half of them. Despite claiming two titles during that span, they only won four of their 11 home games. That even included a tie during Game 1 of the 1907 championship. 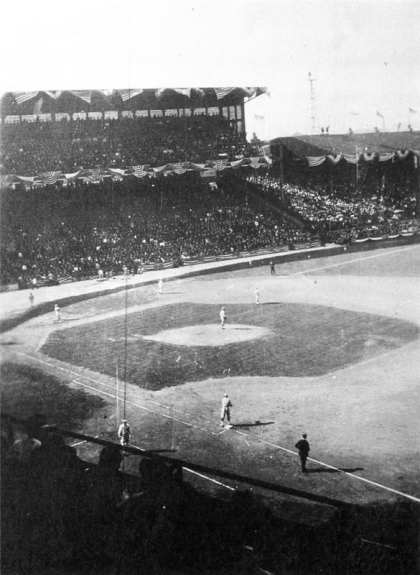 The Cubs packed up relocated to Weeghman Park, later to be renamed Wrigley Field, in 1916. Though they won the National League pennant just two seasons following the move, the Cubs played their home games during the 1918 World Series at Comiskey Park. The United States was involved in World War I and the south side park could accommodate a greater seating capacity. Despite winning another pennant, the Cubs dropped two of their three so-called "home" games while the Boston Red Sox were crowned champions of baseball. 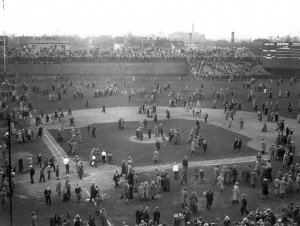 Wrigley Field hosted its inaugural Fall Classic in 1929 against Connie Mack's Philadelphia Athletics. The second was in 1932. The Cubs finally won their first World Series game at Clark and Addison when they defeated the Detroit Tigers 3-1 during Game 5 of the 1935 Series. Despite reaching the World Series again in 1938, they would not win another postseason game in Chicago until Game 6 of the 1945 World Series.

Almost four decades passed until postseason baseball returned to Wrigley Field. The two leagues were split into two divisions beginning in 1969. In 1994, the leagues were realigned into three divisions with wild cards. Now 10 teams reach the playoffs each season. Since the close of the 1945 World Series, the Cubs have reached the postseason six times. During that span they have compiled a 5-9 record. The Cubs won both home games of the 1984 National League Championship against the San Diego Padres. It's fortunate we are not discussing road games. In 1989 they won one of two at home against the Giants. They lost their lone home game of the 1998 NLDS to the Atlanta Braves.

Something unusual happened in 2003. When the Cubs defeated the Braves during the National League Division Series, the Cubs won their first postseason series since 1908. During the NLCS against the Florida Marlins, dropped three of four at home. That's a remarkable feat considering they were five outs away from the World Series during the infamous Game 6. 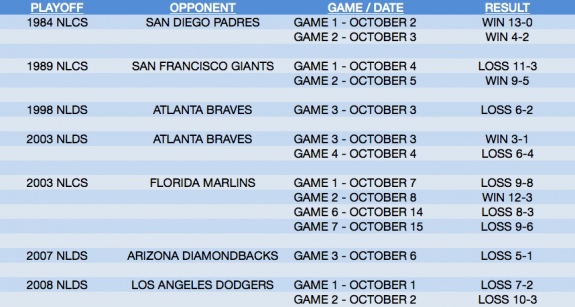 There are still many games to win before we can discuss magic numbers and playoff rotations, but the 2015 Cubs are on the right path. If the Cubs can fend of the Nationals and Giants to lock up the second wild card spot, they will play a one-game playoff on the road. Mostly likely, they will be playing the Pirates at PNC Park. A win there will bring the postseason back to Wrigley Field.