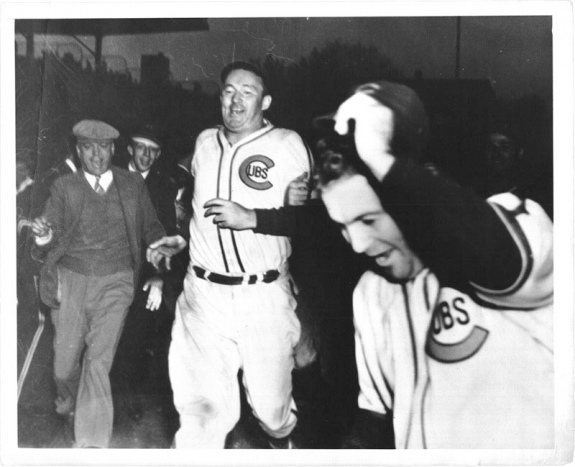 On Wednesday night, the Chicago Cubs and Pittsburgh Pirates will meet for the first time in postseason history as they battle in the one-game National League Wild Card game. The Cubs finished the regular season with a 97-65 record and the Pirates edged them by one game finishing 98-64. Cubs starting pitcher and NL Cy Young Award candidate, Jake Arrieta (22-6, 1.77 ERA), will face Gerrit Cole (19-8, 2.60 ERA) for the opportunity to advance to the National League Division Series against the St. Louis Cardinals.

Prior to tonight's game, we need to rewind all the way back to 1938 to find a game between these two teams that had this much significance. Back in 1938, there were no wild cards, no division winners, no playoffs and no lights at Wrigley Field. Just two leagues and a best-of-seven World Series.

The Pittsburgh Pirates were perched atop the National League for most of the 1938 season, but come September, the Chicago Cubs moved to within one and a half games. The two teams matched up for a three-game series from September 27-29. On Tuesday, September 27, the Cubs beat the Pirates 2-1. Pittsburgh still reigned over the National League, but by the slimmest of margins, just a half-game.

Darkness began to take hold of Wrigley Field. The umpires decided that the ninth inning would be the final inning played. If the score remained tied, the game would be replayed in its entirety prior to the regularly scheduled game on Thursday.

The Pirates failed to score in the top of the ninth inning. With two outs in the bottom of the ninth the Cubs catcher and manager, Gabby Hartnett, stepped to the plate. Pirates pitcher, Mace Brown, worked the count to 0-2. There is some debate as to how dark it was at Wrigley Field that afternoon, but there is no debate that Hartnett crushed the next pitch into the left-center field bleachers to win the game, 6-5.

Legend has it that Hartnett's homer, lovingly referred to as "The Homer in the Gloamin'", clinched the National League title for the Cubs. The Cubs did move ahead of the Pirates by a half game and never looked back, however, the Cubs beat the Pirates again on Thursday, 10-1. Pittsburgh concluded their regular season against the Reds in Cincinnati and proceeded to drop three of four. The Cubs traveled to St. Louis to battle the Cardinals. The Cubs would win the National League by two games only to be swept by the New York Yankees in the World Series.