Off the Beaten Baseball Path: An Old-school Pitcher

Stepping off the beaten path oftentimes provides unique experiences that can be overlooked, or simply lost due to our daily routines. Historic treasures can lurk just around the corner, yet they remain hidden in plain sight. On Saturday, I made the two-hour drive down Interstate 55 to see Star Wars: The Force Awakens (for a fourth time) with friends in Bloomington, Illinois. In an attempt to multitask, I volunteered my services to photograph several project sites for an upcoming engineering interview with the Town of Normal scheduled for Tuesday. After 75 minutes of documenting broken sidewalks and intersections in dire need of traffic signals, I found myself just up the street from Illinois Wesleyan University's baseball stadium. That reminded me of a side trip that I've been meaning to make.

A few years ago, I discovered a parody Twitter account for a pitcher from the '80s. Not the Reagan-Bush '80s, I am referring to the Garfield-Arthur-Cleveland-Harrison 1880s. Back when pitchers were heavily mustachioed men who pitched every single day. Back when pitch counts were irrelevant and baseball was base ball. The pitcher I am referring to is none other than Charles "Old Hoss" Radbourn.

After a short drive I found Miller Street and drove through the stone gates inside Evergreen Cemetery. This cemetery is the resting place of Associate Justice of the United State Supreme Court, David Davis; United States Vice President Adlai Stevenson; and Dorothy Louis Gage, an infant who was the niece of L. Frank Baum's wife and was the basis of Dorothy from the Wizard of Oz. And inside also rests arguably the greatest pitcher of the 19th century. 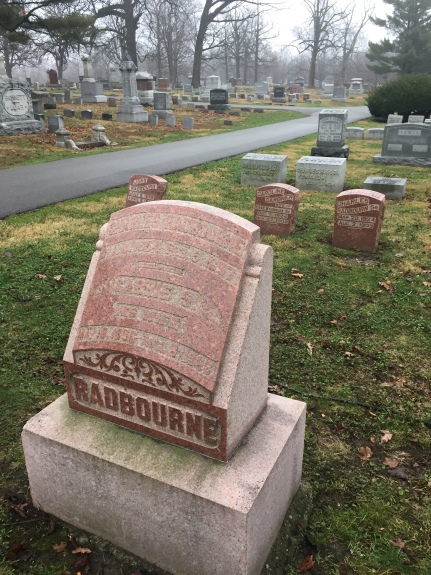 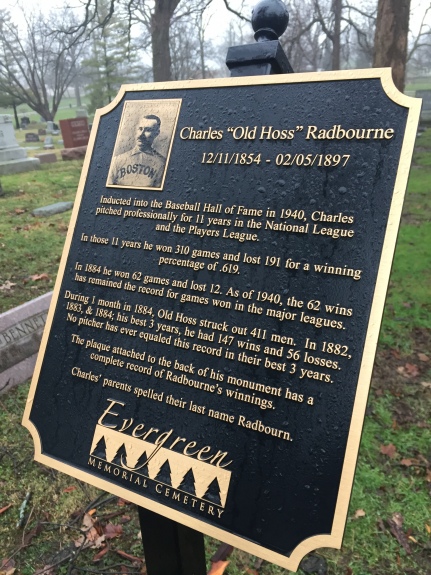 Charles Radbourn was a right-handed hurler who pitched in 527 games and won 309 of them. Of those same 527 games, he started 502 and recorded 488 complete games. He played for the Providence Grays, Boston Beaneaters (the franchise known today as the Atlanta Braves), Boston Reds (Players League) and the Cincinnati Reds. On the field he is best known for establishing the record for most single season pitching wins with 48 in 1883, then shattering his own record the following year with 59 wins en route to a National League title for the Providence Grays. During the 1884 season, Radbourn pitched an astonishing 678 2/3 innings, 11 shutouts and finished with a 1.38 ERA. Despite not being an official stat (credited retroactively), he recorded two saves. Today there is debate whether or not one of those saves should be listed as his 60th win of the season.

But let's be honest. He's become a beloved character these days due to Tweets such as: 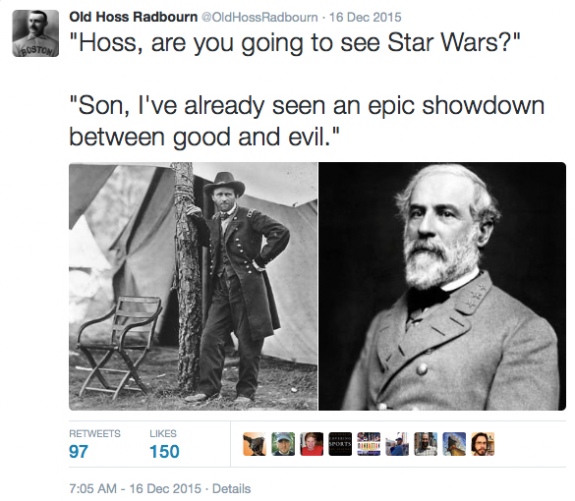 Upon the discovery of this Twitter account, I decided to conduct some research. Though he was born in upstate New York, he was raised in downstate Bloomington, Illinois. Following his 11-year playing career, he returned to Bloomington to own and operate a local saloon. While his playing days (1881-1891) were unkind to his arm, his post-playing days did not provide much relief. In 1893, he considered pitching once again. At his advanced age of 38, he asked for too lucrative of a contract and could not find any takers. He attempted once more in 1894, but again, he failed to receive interest from teams.

Just three seasons after pitching in his final professional game, misfortunate struck in April 1894. While on hunting trip, he was accidentally shot in the face by a friend that lead to loss of sight, partial paralysis and speech loss. Following the hunting accident, Radbourn's health continued to fail and lead him to drink heavily and become a recluse. He would ultimately fall into a coma and die in early 1897.

At the time he played, the Baseball Hall of Fame and Museum in Cooperstown did not exist. The Hall of Fame began electing players in 1936, but the facility would not open until 1939. Elected in the Class of 1939, Charles Radbourn's plaque was included with those of Babe Ruth, Ty Cobb, Honus Wagner, Christy Mathewson, Walter Johnson and a dozen others when the building opened that year. 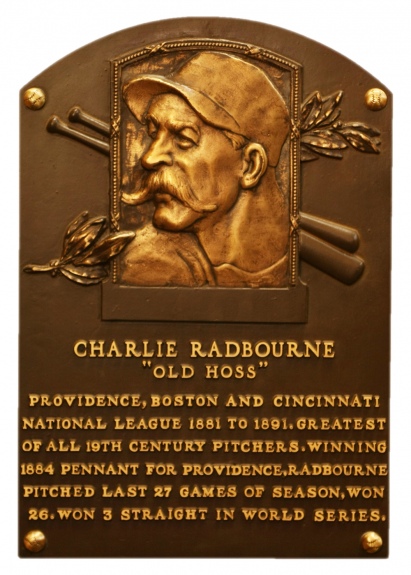 An interesting note to point out is that his last name is misspelled on both his headstone and Baseball Hall of Fame plaque. His family always spelled their name Radbourn rather than Radbourne. Old newspaper stories from his era often referred to him with the incorrect surname.

For more information about Radbourn's pitching feats from 1884, I suggest reading Fifty-nine in '84: Old Hoss Radbourn, Barehanded Baseball, and the Greatest Season a Pitcher Ever Had by Edward Achorn.

* Note: The historical marker indicates that Radbourn won 62 games in 1884. This total includes three victories over the American Association's New York Metropolitans during the World Series. All World Series games prior to 1903 were considered exhibitions and did not determine league championships.

Sources - Baseball Reference, SABR and the Baseball Hall of Fame