Other than the occasional discussion of team logo changes or throwback uniforms, this is not a fashion blog (but I do enjoy Project Runway). But thanks to Facebook's Memories, I suffered flashbacks this morning. 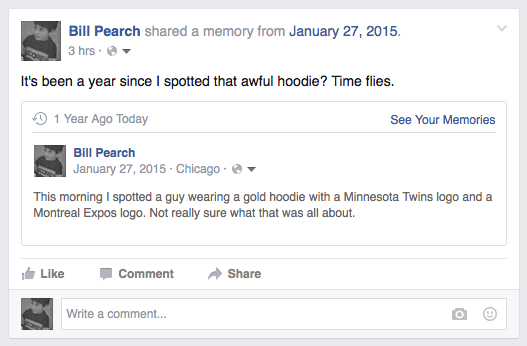 My morning commute used to include an approximately one-mile walk from the Richard B. Ogilvie Transportation Center to Chicago's River North neighborhood. A friend used to work inside the Merchandise Mart, so I would join him and walk through the enormous building. When temperatures drop below freezing, the indoor portion of my walk provided a brief respite of much-needed warmth.

As Facebook kindly reminded me, one year ago I passed through the Merchandise Mart and exited the door at the corner of Kinzie and Wells streets. Nothing out of the norm as I did that every single morning while working there. There's a CTA Purple Line and Brown Line stop at that intersection, so during the baseball season it's not uncommon to see a wide array of opposing team attire. I never needed to check my Cubs or White Sox schedule or my MLB At Bat app, I just took of note of people passing through that intersection. Lots of Kansas City Royals caps? They must be playing at U.S. Cellular Field that evening. Unusual amounts of blue and orange? The New York Mets must be playing a day game at Wrigley Field.

For a few years I have attempted to locate all 30 Major League Baseball team logos. Yeah, I know. It's still a work in progress. Whenever I spot a logo, a bit of authentication is required. While the rules are more complex than simply excluding clothing, shirts and caps are not permitted. However, I always glance when I see an allusive cap or jacket. Perhaps that person has something else. Just like the guy on the train home with the Colorado Rockies cap. I spotted him at least once a month. Doesn't he own a backpack, cell phone cover or even an old Trapper Keeper with the purple and black logo? Anything to cross the Rockies off of my list. But I digress.

As I walked down the steps, a man with a gold hoodie passed me. Right there, front and center was the interlocking red and blue "TC" of the Minnesota Twins. The first thought that raced through my mind was that I already had the Twins checked off my list. But another thought struck me. That sweatshirt also featured a Montreal Expos logo sewn on the front pocket. It wasn't as large as the Twins logo, but still prominent. Finally, a third thought sprang to mind. What the hell was that?

My reaction time was slow. I was wearing gloves and my phone was buried in my front pants pocket. I didn't grab my phone quick enough to document the bizarre sighting, but the second I reached my office I made an impromptu rendering of the hoodie. I felt somewhat like I spotted a UFO and government suits were bound to descend upon my desk and throw me in the back of a windowless van. During the ride to some undisclosed location they would inform me that nothing happened. Well, it did happen and looked exactly like this. 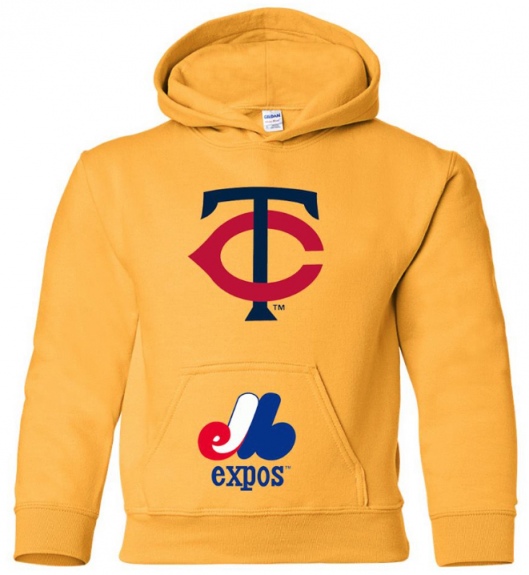