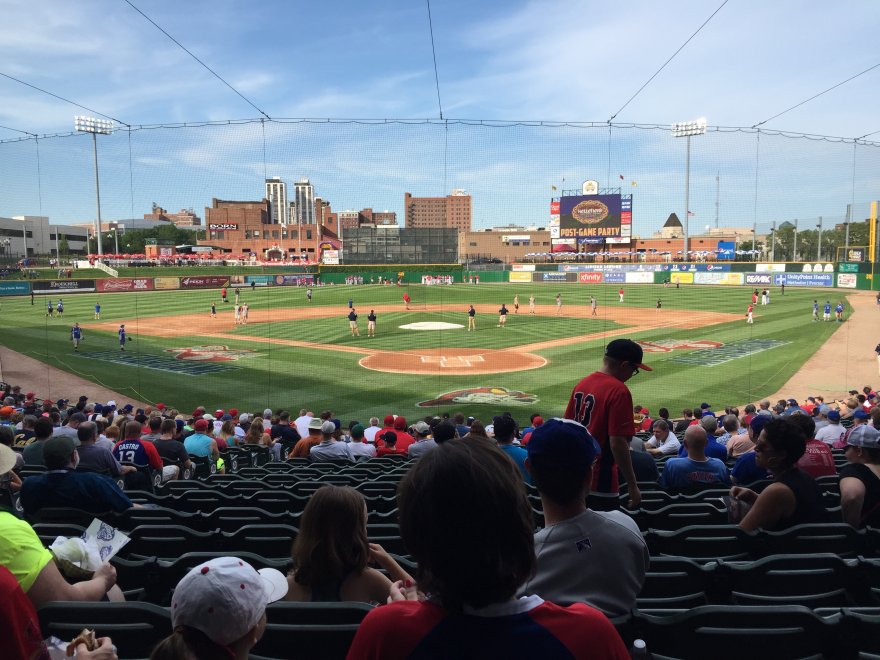 Sometimes work requires travel to strange locales. Perhaps Peoria, Illinois fails to qualify as strange, but it's a destination I don't visit often. Honestly, my last visit was in 1986 to see Andre the Giant wrestle at the Peoria Civic Center. But one year ago today, I did return to that bustling metropolis on the Illinois River. At the time I worked for an engineering firm in Chicago, but I planned to spend the day training a new marketing employee in my former firm's Peoria office.

Earlier that week, I agreed to make the southern sojourn and spend the entire day working with my new teammate and walking her through our standard protocols. After I secured my plans to for the trip, I was curious if the Peoria Chiefs of the Midwest League were in town. Luck would have it that the 2015 Midwest League All-Star Game was being played at Dozer Park that evening. By attending the game, I would be guaranteed to pull into my garage at an ungodly hour. What the heck, ticket purchased.

For as many baseball games as I attend each year, very few are minor league contests. With Geneva, Illinois about 45 minutes directly west of our home, I see the occasional Kane County Cougars game. I've been to a few Schaumburg Boomers (formerly Flyers) games in the independent Frontier League. Almost one decade ago, Susan had to make a trek to the Sunshine State for work, so naturally I tagged along and caught a Daytona Cubs / Palm Beach Cardinals game in the Florida State League. When in Rome, or Jupiter, Florida.

Following a day of work in downtown Peoria (and lunch from a downtown street food vendor), I made the short drive to Dozer Park. By working a full day, I was too late to catch Home Run Derby. The All-Star Game itself was a shutout. The Eastern All-Stars blanked the Western All-Stars, 5-0. Jeremy Null (South Bend Cubs), the starting pitcher for the Eastern All-Stars, surrendered one hit and struck out three batters during his inning on the mound to collect the win. During the game, and thanks to social media, I discovered that two former classmates (a girl from high school and a guy from college) were in attendance. I was fortunate to be able to spend some time with both of them.

Since that evening, I haven't returned to Peoria and I haven't seen a minor league game. However, I did see Luis Perdomo (Peoria Chiefs) toe the rubber in the big leagues. Perdomo, the starting pitcher for the Western All-Stars, started a game for the San Diego Padres against the Milwaukee Brewers at Miller Park in May. He just pitched the first inning, surrendered one run and was tagged with the loss in the All-Star Game. During his start against the Brewers, he pitched two-plus innings and allowed two runs.