Chris Sale, a Pair of Scissors and 1976 Throwback Uniforms

The Chicago White Sox have a knack for generating absurd controversy. After Ozzie Guillen, long-time shortstop and World Series-winning manager, finalized his divorce with the team, most of the bizarre squabbles died off. Squabbles like Twittergate and Twittergate II come to mind. Even after Hawk Harrelson announced that he would reduce his broadcasting responsibilities, it appeared that more unnecessary drama would fade away. Don't worry. Enter Chris Sale.

Chris Sale (14-3, 3.18 ERA) is arguably the best pitcher in Major League Baseball and was named the American League's starting pitcher in the All-Star Game a couple of weeks ago. The White Sox seized control of the American League Central right out of the gates in 2016 and maintained a spot atop the division through May 27. At the time they were 27-22 with a half-game lead over the Cleveland Indians. Entering action tonight, the White Sox are 46-50 sitting in fourth place, 10 games behind the Indians. With any hopes of playoff contention slipping away, White Sox management hinted at moving players with thoughts toward rebuilding. One of the franchise's best bargaining chips is Chris Sale, and rumors of trades are everywhere.

But Sale has found himself on the wrong side of two unfortunate incidents this season. The first dealt with Adam LaRoche, the light-hitting White Sox first baseman. LaRoche, a 12-year journeyman who spent time with the Atlanta Braves, Pittsburgh Pirates, Boston Red Sox, Arizona Diamondbacks and Washington Nationals, ended his career after one season on Chicago's south side. A .207 hitter with a dozen home runs, LaRoche hung up his spikes and walked away from baseball after team Executive Vice President Ken Williams asked him to "dial it back" in reference to the amount of time his 14-year-old son, Drake, was spending with the team. Sale, a team leader, came to Drake's defense and verbally challenged Williams' decision. The incident was quickly brushed under the rug as the team played winning baseball right out of the gates. 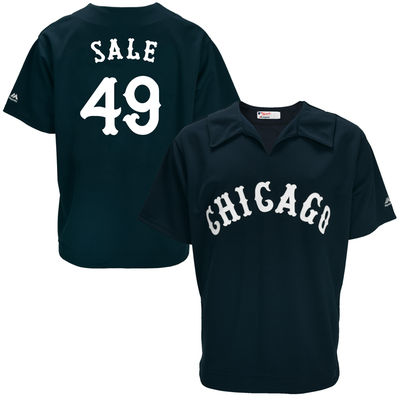 Virtually out of contention, Sale was slated to start tonight's game at U.S. Cellular Field against their division rivals, the Detroit Tigers. Prior to game time, the White Sox announced that Sale would not make the start fueling rumors of an imminent trade. But word began circulating on Twitter about a clubhouse incident. Tonight, the White Sox were supposed to wear their 1976 throwback uniforms (think big butterfly collars). According to Ken Rosenthal, Sale cut up the uniforms during batting practice claiming that promotions and jersey sales were more important to the franchise than winning. No official word regarding a fine or suspension has been made as of now.

Will this incident prove detrimental to Sale's trade value as the July 31 non-waiver trade deadline approaches? Only time will tell. But following the incident and a brief rain delay, the White Sox took the field wearing their 1983 throwbacks instead.