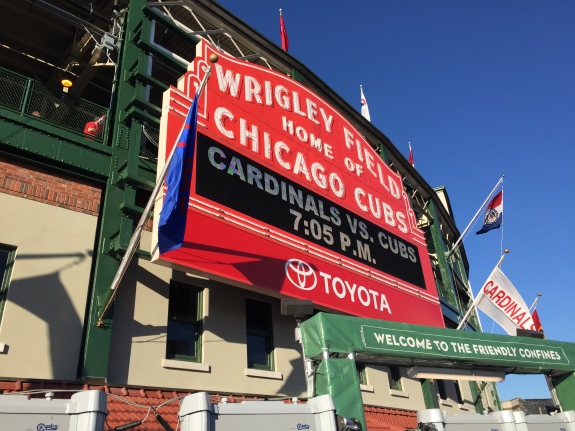 When the Chicago Cubs (73-41, .640) noticed the St. Louis Cardinals (60-56, .517) were traveling to Wrigley Field for a four-game series in mid-August, they knew there was an opportunity to seize a commanding lead in the National League Central. So far, the Cubs have capitalized.

After winning the first two games of the series, and guaranteeing at least a split with their long-time division rivals, the Cubs have strung together a season-high 11 consecutive wins. In addition, they now hold a 14-game division lead over the Cardinals.

On Thursday night in the series opener, the Cubs needed a base-loaded walk by Anthony Rizzo in the bottom of the 11th inning to beat the Cardinals, 4-3. Friday afternoon was a different story. The Cubs dragged out their heavy lumber and throttled the Cardinals, 13-2. Matt Szczur recorded his first multi-homer game with two long balls. Willson Contreras, Javier Baez and Jorge Soler each homered to bring the game total to five.

This afternoon, if rain can clear out of the area, the Cardinals will send Luke Weaver (0-0, 0.00 ERA) to the mound to make his MLB debut. This season, Weaver has split time between the Springfield Cardinals (Class AA Texas League) and Memphis Redbirds (Class AAA Pacific Coast League). Between the two leagues, he has compiled a 7-3 record and 1.30 ERA.

Kyle Hendricks (11-7, 2.17 ERA) will start for the Cubs. To stay he's pitched well at Wrigley Field this season is an understatement. In 2016, Hendricks has compiled an 8-1 record with a 1.19 ERA at the Friendly Confines. During his last three starts, he allowed four earned runs, and pitched a complete-game shutout against the Oakland Athletics.

Fun Fact: After seeing Kyle Hendricks pitch five times in 2015, including a start against the New York Mets during Game 3 of the National League Championship Series, this is the first time I've seen him toe the rubber in 2016. The first time I saw Hendricks pitch was on Wednesday, September 3, 2014 against the Milwaukee Brewers at Wrigley Field. During that start, he pitched 5.2 innings and allowed two earned runs en route to a 6-2 Cubs win.