The Chicago Cubs begin their quest for a World Series title this evening at Wrigley Field against the San Francisco Giants. Game 1 of the National League Division Series (NLDS) is scheduled for 8 p.m. Tonight's pitching matchup is between Johnny Cueto (18-5, 2.79 ERA) for the Giants and Jon Lester (19-5, 2.85 ERA) for the Cubs.

For Cubs fans, there's a nervous energy surrounding this postseason. For years, fans have claimed that each season was the so-called "this is the year" when the Cubs will finally reach the pinnacle and claim a World Series title. Of course, that has not happened since 1908. For that matter, the Cubs have not reach the World Series since 1945. But in 2016, the Cubs won 103 games. That ranks as the fifth-highest win total in franchise history (and the best since the advent of color photography). Earlier this week, Sports Illustrated added to the hype by recreating an old 1908 Sporting Life magazine cover that highlighted the World Series-winning Cubs. 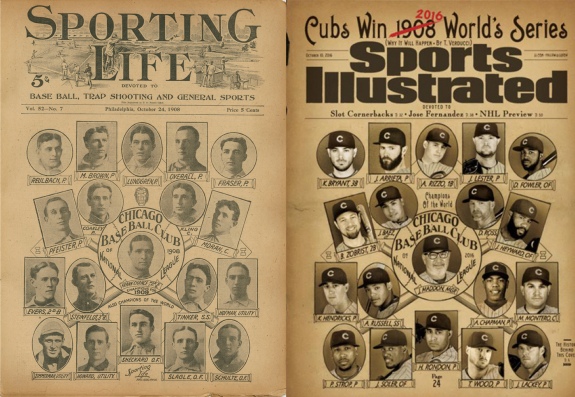 For most the regular season, the Cubs held a comfortable lead over second-place teams in the National League Central. The Cubs clinched a division title almost two weeks before the end of the regular season. With that luxury, the team was able to balance playing time and giving players adequate periods of rest in anticipation of a deep postseason run. During the regular season, the Cubs won four out of seven regular season games against the Giants. But tonight, the Cubs and Giants are tied. Regular season records mean nothing during the postseason. Since the NLDS is a best-of-five series, the first team to win three games will advance to the National League Championship Series (NLCS) to face the either the Los Angeles Dodgers or Washington Nationals.

After the All-Star Game break, the Cubs demolished their opponents, but there are reasons for concern heading into tonight's game. Lester pitched well down the stretch during the regular season, but he does compile high pitch counts quickly. Add to that his lack of a pick-off move to first base. If Giants hitters can reach base tonight, they could be running early and often. Kyle Hendricks and Jake Arrieta will start Games 2 and 3 respectively. During their final two starts, they did not pitch well. Hendricks lasted five innings and allowed four earned runs to the last-place Cincinnati Reds. Arrieta also pitched five innings, but allowed seven earned runs to the Pittsburgh Pirates.

Here's the schedule for the NLDS: