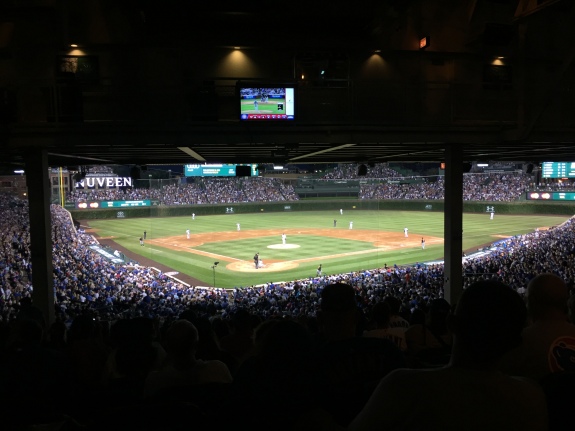 The last time I visited Wrigley Field, I had the entire place to myself. Just days earlier, the Chicago Cubs defeated the Cleveland Indians to win the franchise's first World Series title since 1908. That Sunday morning, I made several laps around the ballpark starting at the iconic marquee and walking counterclockwise on Addison, to Sheffield, to Waveland and down Clark. I did not have a piece of chalk, and I was not certain I would find one. And I was sure I could find a place to write anything even I did find one. After completing several laps, I found the smallest piece of white chalk resting near a fire hydrant on Sheffield. Finally, I discovered a tiny opening on the Waveland Avenue wall that was not claimed.

The last time I stepped inside Wrigley Field, I attended the most important baseball game of my life. With the 2016 World Series tied after two games in Cleveland, the Cubs returned home for the first of three games. That Friday night was historic and a moment I will never forget. The Cubs were hosting their first World Series game at Wrigley Field since Game 7 of the 1945 Fall Classic. The wind howled straight out to right field, yet none of the Cubs sluggers could get the ball in the air. Despite having runners in scoring positions multiple times, the Cubs failed to plate a runner and the Indians won Game 3, 1-0. The Cubs continued their franchise's tradition of not winning World Series games at the Friendly Confines.

Today, the Cubs (6-3, .667) will face their National League Central Division rivals, the Pittsburgh Pirates (3-6, .333), for the first time in 2017. The Cubs trail the front-running Cincinnati Reds by half a game. The Pirates are tied with the St. Louis Cardinals and are three and a half games back.

The Pirates will send Gerrit Cole (0-1, 6.55 ERA) to the mound. Cole has pitched well at Wrigley Field having compiled a 6-1 record and a 2.20 ERA. During 2017, Cole made two starts and logged 11 innings pitched and fanned six batters.

Kyle Hendricks (1-0, 6.00 ERA), will start for the Cubs. Last year, Hendricks posted a 9-2 record with a 1.32 ERA at Wrigley Field in 2016. Today will only be his second appearance during the young season. His lone start came against the Milwaukee Brewers at Miller Park. Hendricks lasted six innings. Despite surrendering four runs, all earned, he collected the win.

Fun Fact: The last time I saw the Pirates was on August 30, 2016 against the Cubs at Wrigley Field. Kyle Hendricks made the start and logged the win, as the Cubs won 3-0. Anthony Rizzo belted a two-run homer in the bottom of the first and Miguel Montero singled home Addison Russell in the bottom of the second.