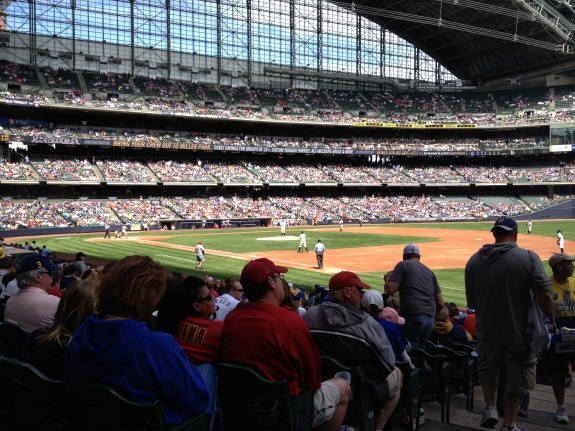 Last year, we made five trips to Miller Park. Despite battling in most of the games, the Milwaukee Brewers dropped every single one of them. The Brewers forced extra innings against the San Diego Padres, but lost 8-7 in 12 innings. The Washington Nationals beat them 3-2. The Chicago Cubs, en route to a World Series title mounted a late comeback to win 6-5. The biggest loss came at the hands of the Pittsburgh Pirates, 9-6. And finally, the Cincinnati Reds defeated them 4-2.

Today, the Brewers sit at .500 (9-9) and in the middle of the National League Central. They trail the front-running Cubs by one game. The St. Louis Cardinals (7-10, .412) are currently in last place, two and a half games off the pace.

This evening, the Cardinals will send 29-year-old Lance Lynn (1-1, 3.12 ERA) to the mound. Lynn recorded his first win of the season against the Pittsburgh Pirates during his last start. The Brewers will counter with 29-year-old Chase Anderson (2-0, 1.50 ERA). Anderson logged wins in two of the three starts. His first win came against the Toronto Blue Jays and his second against the Cubs.

Fun Fact (and Photo): The last time I saw the Cardinals and Brewers play was on May 5, 2013 at Miller Park. The Cardinals routed the Brewers thanks in part to a six-run second inning. The final score was 10-1. In fact, I used that second inning as part of my Baseball 101 series on how to score a game.