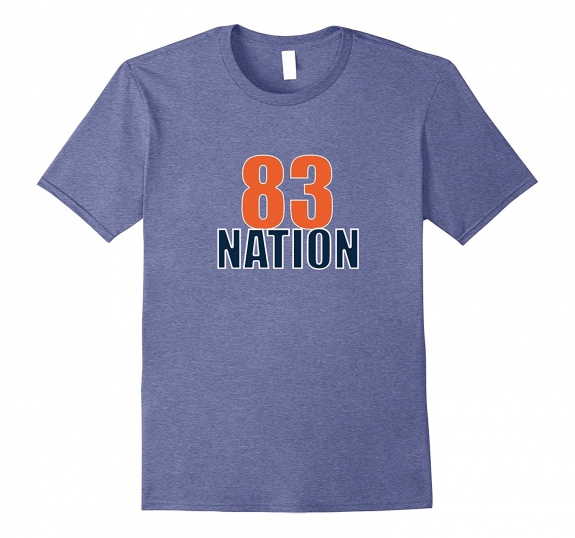 Football is my second favorite sport. But we're talking a distant second. Regardless, I have a fantasy football team. I don't follow the entire NFL like I do with Major League Baseball.

Lately, I have been impressed with automated reports that can be written these days. I have seen apps that can score and write a recap of Little League Baseball games. Once our fantasy football teams were loaded into Yahoo, humorous draft grades were posted. I earned a B, but the report was interesting to say the least. My team is named #83Nation. It's a Chicago radio thing.

With an Elite Set of WRs, #83Nation Has a Squad Built to Reach the Playoffs

Draft Summary
Playoffs?! Are you kidding me, playoffs?! Actually, yeah that could happen. #83Nation put together a quality team and is projected to finish in fourth-place in Poop Cuffs Attorney At Law League at 9-5-0 (1,670 points). They focused on having a balanced offensive attack, selecting QB Aaron Rodgers (14th overall), RB Joe Mixon (47th), WR Julio Jones (7th), and TE Jordan Reed (34th) within the first five rounds. They ultimately built the best set of WRs in the league, as they have Jones, Amari Cooper, Allen Robinson, and Mike Wallace on their team.

Schedule
Week 8 may cause some frustration for #83Nation, as their top two projected scorers (Aaron Rodgers and Eli Manning) will have a bye week. Taking a look at the season from start to finish, they have a more-difficult-than-average slate. Along with the fifth-most grueling overall schedule, the first four games and last four games of the season are fairly average for #83Nation.

Draft Notes
- Cream Rises to the Top At four different positions, #83Nation picked up projected top-two players (including Aaron Rodgers, Justin Tucker, and Kansas City).
- Risk Averse #83Nation minimized risk by choosing seven consistent players among their 17 picks.
- Great Idea, Poor Execution #83Nation will need a hand from the waiver wire in Week 10, as their only K (Justin Tucker) and only DEF (Kansas City) will both be on bye that week.
- Batman Needs Robin And Joe Mixon needs Jeremy Hill. #83Nation hedged their bets by snagging a couple of teammates with their fifth-round and 15th-round selections.
- Scraping the Wire in Week 8 Grabbing two QBs (Aaron Rodgers and Eli Manning) that share a bye week was a bold move by the manager of #83Nation.

Team of Champions #83Nation assembled a team of fantasy MVPs. Last season, four of their players were among the top-20 players that were on the most championship rosters across all Yahoo! leagues, including Aaron Rodgers, Amari Cooper, and Jordan Reed.