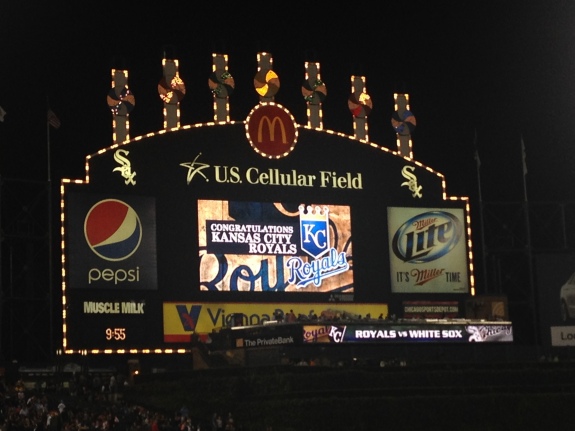 Yesterday, I made my final trip to Milwaukee's Miller Park in 2017. What seemed like a certain Chicago Cubs win once they grabbed a late lead turned into a dramatic win for the Milwaukee Brewers. Wade Davis, the Cubs' unbeatable closer, surrendered a game-tying home run to Orlando Arcia in the bottom of the ninth inning to force extras. After the Cubs grabbed a 3-2 lead in the top of the tenth inning, Davis surrendered a game-winning two-run blast to Travis Shaw.

Today, I am making my final visit to Chicago's South Side and attending my final Junior Circuit game between the Kansas City Royals (76-78, .494) and Chicago White Sox (62-92, .403). The Royals, winners of the 2015 World Series, still maintain a minimal chance of reaching the postseason via the second American League wild card spot. They are tied with the Los Angeles Angels of Anaheim and Texas Rangers. All three teams trail the Minnesota Twins by four-and-a-half games. The White Sox are looking toward the future after completing several trades for top prospects.

This afternoon, the Royals will start 32-year-old Ian Kennedy (4-12, 5.39 ERA). He picked up losses during his last two starts and lasted three and five innings in both starts respectively. The White Sox will counter with 23-year-old Lucas Giolito (2-3, 2.58 ERA). Giolito started against the Royals in Kansas City on September 13. He pitched 6 1/3 innings and surrendered only one earned run.