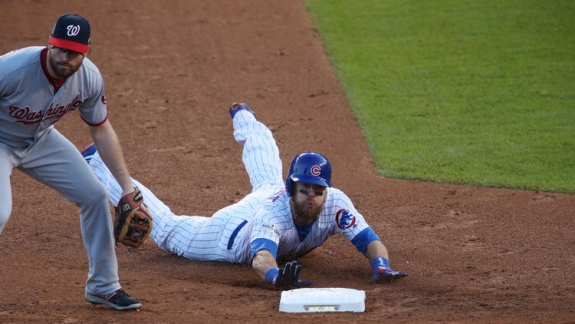 Ben Zobrist is not to blame for the Chicago Cubs 6-3 loss to the Washington Nationals in Game Two of the 2017 National League Division Series (NLDS) on Saturday night. But there is little doubt that the 36-year-old, who patrolled left field during the late innings, failed to make a reasonable attempt to catch Ryan Zimmerman's three-run homer that ultimately decided the game. A younger, more athletic outfielder could possibly get leather on the ball. 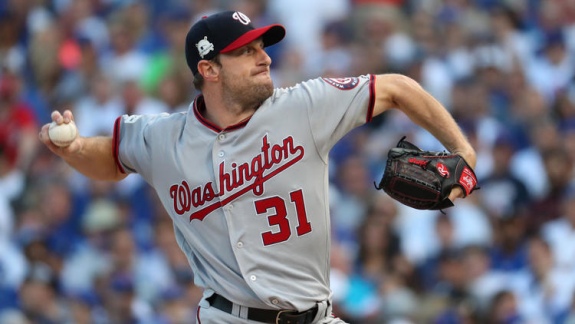 But if Zobrist was seeking redemption, he found it with one out in the bottom of the seventh inning. Nationals ace, Max Scherzer, took a no-hitter and a 1-0 lead past Bill Murray's rendition of Take Me Out to the Ballgame. Zobrist doubled ending Scherzer's bid for postseason glory and drove the pitcher from the game. Later in the inning, he scored when Albert Almora, Jr. singled to tie the game. Anthony Rizzo would single in the bottom of the eighth inning to score Leonys Martin to give the Cubs a 2-1 lead.

For the second time in three games, Nationals starting pitchers were able to shut down the Cubs offense and stretch no-hitters in the sixth and seven innings. Two times, the Cubs managed to reverse their fortunes and win both games. On Friday night, Stephen Strasburg held the Cubs hitless for six innings and allowed two unearned runs. The Cubs won 3-0. 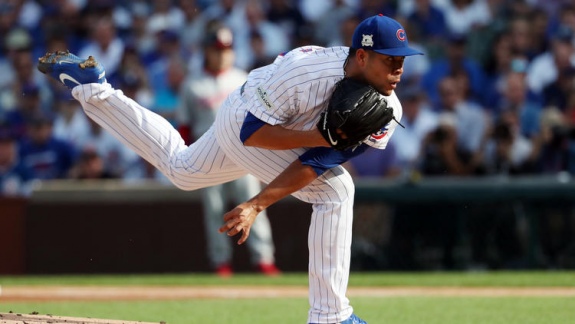 Cubs starting pitcher, Jose Quintana (11-11, 4.15 ERA), made the first postseason start of his career. He lasted 5 2/3 innings, fanned seven Nationals and allowed only two hits and one unearned run. The Cubs acquired Quintana at the 2017 trade deadline from the Chicago White Sox.

This afternoon, the Cubs look to eliminate the Nationals at Wrigley Field to advance to the National League Championship Series (NLCS) to face the Los Angeles Dodgers for a second consecutive season. Jake Arrieta (14-10, 3.53 ERA) will face Tanner Roark (13-11, 4.67 ERA).