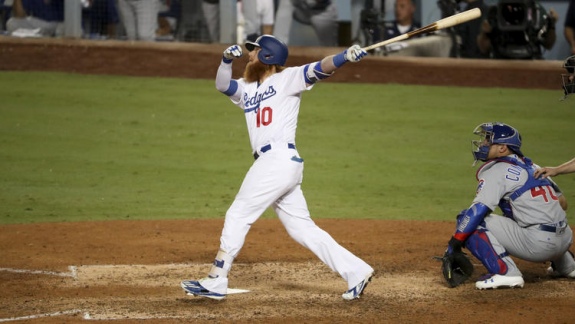 Last night, the Chicago Cubs dropped the second game of the 2017 National League Championship Series (NLCS) to the Los Angeles Dodgers, 4-1. The National League West champions now hold a firm grip on the series and are two wins away from claiming the franchise's first National League pennant since 1988. 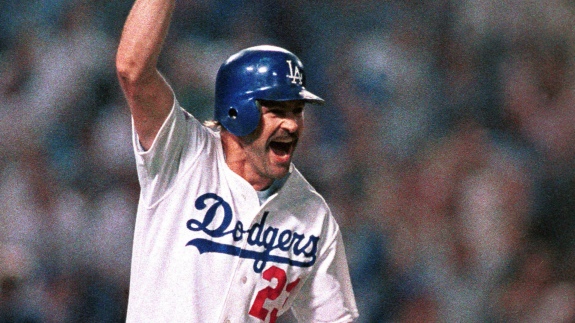 Kirk Gibson celebrates his two-run, game-winning home run off of Oakland Athletics closer, Dennis Eckersley, in the bottom of the ninth inning of Game One of the 1988 World Series.

And speaking of 1988, last night was the 29th anniversary of Kirk Gibson's World Series heroics. Los Angeles found the ideal way to commemorate the occasion. With two outs in the bottom of the ninth, the Dodgers had runners on first and second. Rather than use the team's ace reliever Wade Davis, Cubs manager Joe Maddon opted to use John Lackey for the crucial situation. Justin Turner, the Dodgers third baseman who drove in the team's only run of the night, stepped to the plate with the score tied, 1-1. Turner crushed a three-run, game-winning home run beyond the center field fence.

For a manager who grasps a strong understanding of advanced metrics, Maddon seemed to defend old-school logic when pressed on his decision to pitch Lackey instead of Davis. Maddon claimed that Davis would not pitch more than three outs due to his workload in NLDS Game Five against the Washington Nationals. The Cubs skipper was determined that Davis would only pitch if the Cubs gained a lead and would lock down the save. 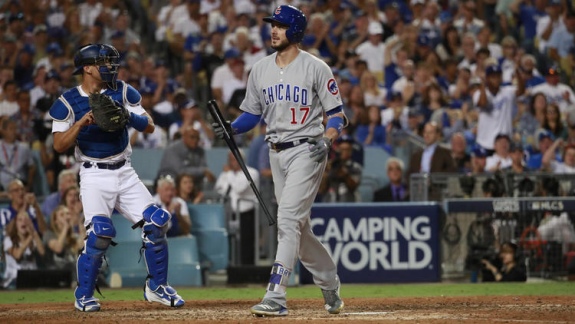 Can the Cubs rally and make this a series? The games shift to Wrigley Field starting on Tuesday. If the Cubs intend to make a run at winning their second consecutive National League pennant, they will need to find some offense. And, it will require a trip back to Dodger Stadium. Against the Dodgers in the NLCS, all three Cubs runs came via the long ball. Albert Almora, Jr. hit a two-run shot in Game One, and Addison Russell hit a solo blast in Game Two. Kris Bryant (.125 / .125 / .125*) and Anthony Rizzo (.000 / .250 / .000*), the offensive heart and soul of the team, has been silent at the plate.