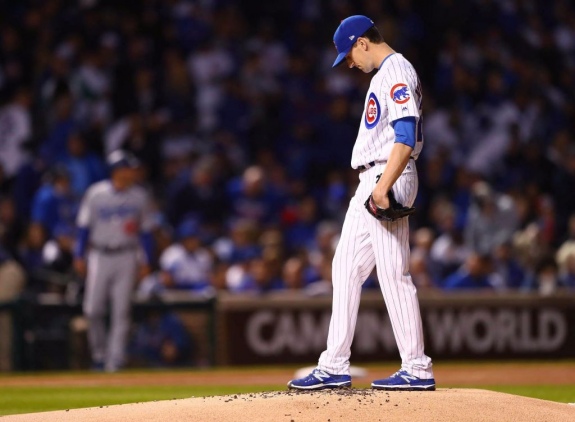 The defending World Series champions are facing elimination this evening following another night without offense and a bullpen that is struggling. Game Three of the 2017 National League Championship Series (NLCS) proved to be more of the same.

With a runner on first base, the Los Angeles Dodgers' Yasiel Puig nearly blew the game wide open during his first at-bat when his long foul ball narrowly missed the left field flagpole. But ultimately, Kyle Hendricks (1-0, 3.27 ERA*) struck out the Dodgers' right fielder looking. But with one out in the bottom of the first, Cubs left fielder Kyle Schwarber belted the first pitch he saw from Yu Darvish (1-0, 1.80 ERA*) to give the Chicago Cubs an early 1-0 lead. And with that at-bat, the offense once again vanished.

Just as with the first two games of the NLCS at Dodger Stadium, as soon the Cubs grabbed an early lead, the Dodgers answered swiftly. Andre Eithier, in the top of the second, hammered a solo blast off of Hendricks into the right field seats to knot the score at 1-1. Then the long ball trend continued in the top of the third when Chris Taylor contributed the third solo home run of the evening giving the Dodgers a 2-1 lead - a lead they would not relinquish.

Joc Pedersen doubled in the top of the fifth. With one out, Chris Taylor tripled to drive in the first run without a homer extending the Dodgers' lead to 3-1.

Cubs manager Joe Maddon pulled Hendricks during the top of the sixth in favor of Carl Edwards, Jr. Edwards, who has struggled during the 2017 postseason, found himself pitching to Darvish with the bases loaded. On four pitches, Edwards walked his pitching counterpart to push the Dodgers lead to 4-1.

And then there's Ian Happ's drop in right centerfield. Cody Bellinger hit a long fly ball to center. Happ got a glove on the ball, but in the process of finding his feet, the ball slipped out of the leather. Somehow Happ's mishap did not lead to more damage in the seventh inning.

But during the top of the eighth, the wheels fell off. Logan Forsythe walked, the Austin Barnes singled. Mike Montgomery threw a wild pitch that allowed Forsythe and Barnes to advance to second and third. Charlie Culberson struck out, but advanced to first on the passed ball. Forsythe scored to extend the lead to 5-1. Barnes scored the sixth and final run on Kyle Farmer's sacrifice fly.

The Cubs mounted a mild comeback during the bottom of the ninth when an Albert Almora, Jr. hit was called a ground-rule double after the ball was momentarily trapped in the left field ivy. But the rally was instantly squashed when Addison Russell popped out, then Tommy La Stella and Ian Happ went down swinging.

If the Cubs plan to advance to their second consecutive World Series, the four-game rally must begin this evening.

*Pitching statistics for the 2017 postseason