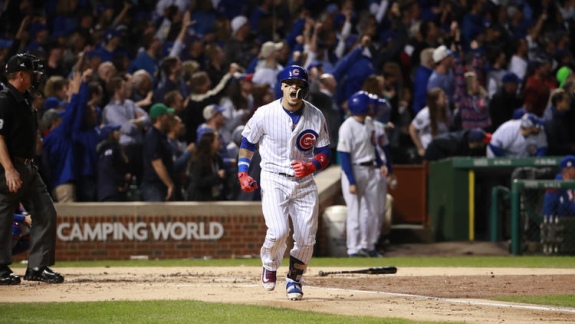 There are several reasons the Chicago Cubs are trailing the Los Angeles Dodgers in the National League Championship Series (NLCS) - lack of offense, bad bullpen management - but last night, the offense resurfaced. Well, sort of. Regardless, the Cubs were able to raise the "W" flag atop Wrigley Field's manual scoreboard at least one more time this postseason.

By winning Game Four, 3-2, the Cubs narrowly avoided the sweep and will live to battle at least one more day. Every run scored last night came via the long ball. All five home runs were solo shots on a windy night at Wrigley Field. So while the team scored more runs, one was by Willson Contreras and two were by Javy Baez. Despite the win, the heart of the Cubs offense is missing in action. Last night, third baseman Kris Bryant (.194 / .216 / .250*) was 0-for-4 with one strikeout and first baseman Anthony Rizzo (.152 / .222 / .273*) was 0-for-3 with three strikeouts. 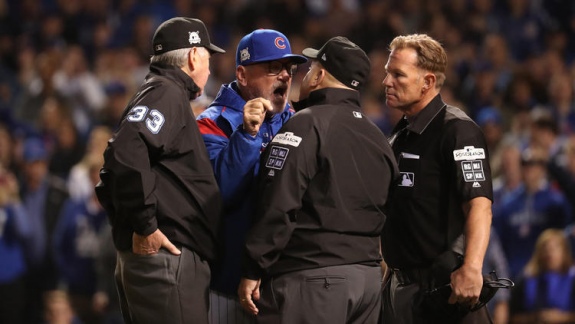 Cubs manager Joe Maddon was ejected for the second time during the NLCS. With Curtis Granderson at the plate and the game-tying run on second base, Granderson swung and missed a low pitch that hit the dirt. The umpiring crew convened and decided that the ball was fouled off, despite the video board clearly showing that Granderson never made contact with the ball and striking out. Maddon was booted, but Granderson struck out on the very next pitch.

If the Cubs intend to win their second consecutive National League pennant, they will need to push the NLCS to a maximum seven games. In order to force a Game Six in Dodger Stadium, they will need one more win at Wrigley Field this evening. The Dodgers will send their ace pitcher, Clayton Kershaw (1-0, 4.76 ERA**) for the elimination game. The Cubs will answer with Jose Quintana (0-0, 1.59 ERA**).