Name That Game: Dodgers vs. Cubs 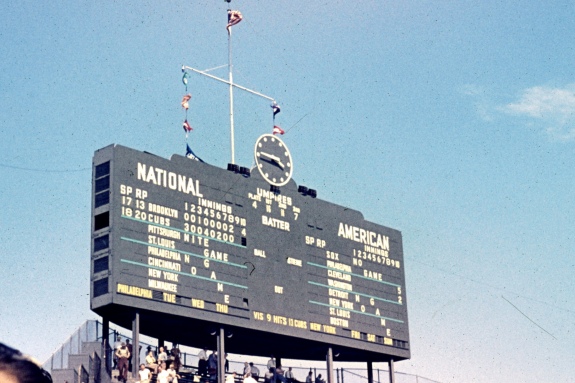 "People ask me what I do in winter when there's no baseball," said Rogers Hornsby, the Hall of Fame infielder and seven-time National League batting champ. "I'll tell you what I do. I stare out the window and wait for spring."

Another baseball season is in the books and the holidays are looming around the corner. There's no question that I will eventually suffer from an acute case of baseball withdrawal each offseason, but I clearly have more hobbies than Hornsby. My baseball withdrawal usually does not kick in until after the start of the New Year, but when it does, I have many methods to remedy this condition. There are myriad books about our national pastime to fill the snowy months. And once fantasy baseball publications start to hit newsstands, I'll start planning the construction of a mediocre, fifth-place team (good enough to be competitive, bad enough to never win money).

One of my simple offseason pleasures is scoreboard watching. I'm not talking about the traditional definition of the term. I enjoy finding old photos of scoreboards from ballgames from yesteryear and trying to determine an exact date. Geeky, I know. But I enjoy the hunt.

As I was flipping through my Facebook memories earlier this week, I found an old photo of Wrigley Field's manual scoreboard. I found it on some random family's blog. After I pulled up the image, I noticed it didn't have a date, so it was time to unravel the mystery. Honestly, the date of this game was fairly simple to determine, but let's walk through the steps.

The Chicago Cubs played the Brooklyn Dodgers at Wrigley Field. The Dodgers relocated to Los Angeles following the 1957 season, but there a few clues that narrow the date of this game. The most important clues pertain to the teams playing in the other games that day. Six of the teams on the scoreboard would relocate to new cities.

Let's start with the National League:

- Brooklyn: The Brooklyn Dodgers would famously depart Ebbets Field for greener pastures in Los Angeles after the 1957 season.
- New York: Just like the Dodgers, the New York Giants abandon the Polo Grounds for a new life in San Francisco following the 1957 season.
- Milwaukee: While the Dodgers are always labeled as the team that packed up and left, the Boston Braves beat the Dodgers to the punch. Following the 1952 season, the Braves shipped off to Wisconsin. That narrows the window (1953 to 1957).

Now jumping over to the American League:

- Philadelphia: Philadelphia was once a two-team city. The Athletics would not move to Kansas City until after the 1954 season. Now, the photo could be anytime from 1953-1954.
- Washington: The original Washington Senators would eventually move to Minnesota and become the Twins, but not until 1961.
- St. Louis: While teams traditionally move from the east coast to the west, the St. Louis Browns did the opposite. After the 1953 season, the Browns moved east to become the Baltimore Orioles. That means this photo is from 1953.

During the final game of the late-June series, the Cubs beat the Dodgers 9-4. Checking the box score, the Cubs plated three in the first, four in the fourth and two more in the sixth. We have a winner. The photo is from Monday, June 22, 1953.