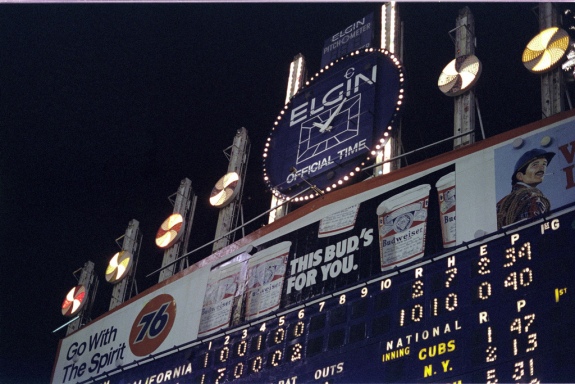 Last week, I identified the date of a game between the Brooklyn Dodgers and Chicago Cubs that was played at the Friendly Confines. The photo in question included a complete image of Wrigley Field's manually-operated scoreboard rising above the bleachers. By looking at games played between National and American league teams, the date was identified as June 22, 1953. The North Siders won, 9-4. At that time, the Dodgers were in second place trailing the Milwaukee Braves by three games. The Cubs were in seventh place, 19 games off the pace.

Today, we jump to Chicago's South Siders and the American League. This photo is different in that it's only a small portion of the scoreboard and only one additional game, a National League game, is completely visible.

So what clues do we have? The photo shows Comiskey Park's Monster scoreboard that was installed following the 1959 World Series. The scoreboard itself was modified from its original color scheme, and over time, pinwheels were added to the top. This scoreboard was replaced after the 1981 season in favor of the new Diamondvision board. The White Sox are beating the California Angels, 10-2 after six innings. We can see the uniform numbers of the two pitchers in the game (34 for the Angels, 40 for the White Sox). We cannot see the American League side of the scoreboard, but we know the Cubs are losing to the New York Mets, 2-1, at Shea Stadium. We also know the pitchers' uniform numbers for that game (47 for the Cubs, 13 for the Mets).

Honestly, the easiest way to narrow the date of the game was to research uniform numbers.

Perhaps the Mets were stocked with players who suffered from triskaidekaphobia. Neil Allen was only the second member of the Mets to wear 13. Roger Craig was the first in 1963, but Allen donned the unlucky digits from 1981 through 1983. That means this photo was from 1981.

Let's look at the White Sox schedule from 1981. That was the year of the split season strike when games in June, July and August were canceled. According to Baseball Reference, the Angels only traveled to Comiskey Park for two series in 1981 (May 30-31, September 28-30). Of all six games played during those two series, the White Sox only scored 10 runs once, on Wednesday, September 30.