My Baseball Travels 2017: An Old Stairway and a Plaque 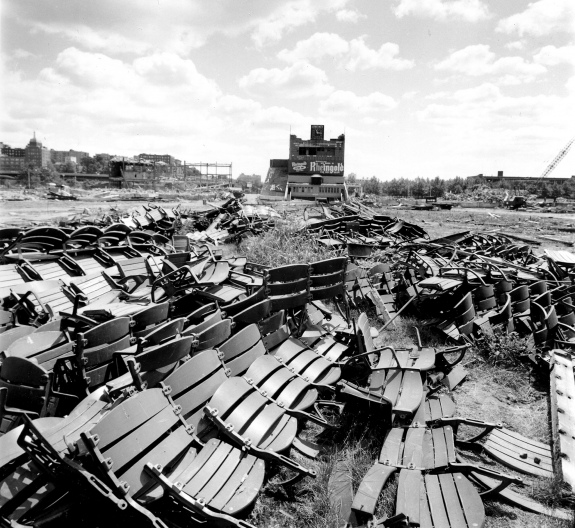 The demolition of the Polo Grounds began on April 10, 1964 and was completed later that summer.

Looking back, 2017 was an arduous spin around the sun. Before closing the books on the last 12 months and wiping the slate clean (or any other year-end cliche), I'd be remiss if I overlooked one of my favorite and most unexpected adventures of the year.

During the summer of 2016, my nephew was roaming around my home office studying the pieces of baseball memorabilia on display. He noticed my 1982 National League lineup cards, autographed baseballs, pennants and other assorted items. He knew that I traveled to see most, if not all, of the Major League Baseball parks and asked, "How many parks have you visited?"

By that time, I had seen all 30 teams play in their home city, and many in multiple parks. Susan made me swear an oath never to reference any facilities under construction until the season it officially opens. I was strictly forbidden to make statements like:

I've been to [insert number of parks], but the [insert MLB team name] will open a new ballpark in [insert year].

"I've been to 39 parks," I said. "Some of the old places like Comiskey Park and the original Yankee Stadium are gone." While that number was accurate, I wanted to inform him that the Atlanta Braves were opening a new park in 2017. But rules are rules, of course.

"Have you been to the Polo Grounds?"

Not unless time travel has become a viable option. He was kidding, right? How much baseball history did he know? He was a video game junkie, so perhaps the old bathtub-shaped home of New York's Giants, Yankees and Mets popped up as a retro stadium in a game. 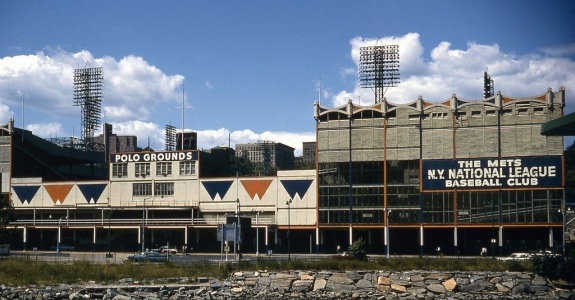 "Sorry, kid. They demolished that place in the early 1960s after the Mets built Shea Stadium," I said. "I wasn't born until 1973." When the Polo Grounds had its date with the wrecking ball, teams were not interested in historic preservation. Teams needed better facilities and trudged forward. Out with the old, in with the new. No marker to designate where Bobby Thomson's infamous blast landed and even the Eddie Grant plaque in center vanished (and no, the plaque outside of San Francisco's AT&T Park is a replica).

Fast forward to July 2017. Susan won a unique behind-the-scenes tour at The New York Times. I had a little vacation time to burn, so we arranged a brief excursion that included a return visit to Citi Field (the Mets rallied to defeat the Oakland Athletics). While there, I wanted to see what little remained of the Polo Grounds.

After the Giants shipped off to San Francisco following the 1957 season, the upstart Mets briefly called the Polo Grounds home (1962-1963). Surely a few pieces of memorabilia would make the trek to Cooperstown in upstate New York (and a chair is on display in Citi Field's Hall of Fame), but the Polo Grounds were swiftly demolished and four residential towers were constructed on the former playing surface. Nothing remained of the ballpark that hosted baseball games in Manhattan -- in various incarnations -- from 1890 through 1963. But a remnant located in Highbridge Park managed to survive for more than a century. 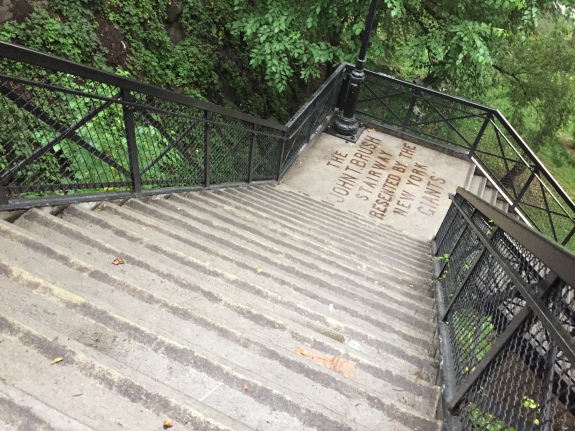 Nestled within the trees atop Coogan's Bluff, there's a stairway that descends from Edgecombe Avenue between 157th and 158th streets to Harlem River Driveway. Originally constructed in 1913, the John T. Brush Stairway honored the late owner of the Giants (who passed away in 1912) and provided safe passage for fans known to sneak a peek into the old ballpark. Ever since the Giants headed west in the late 1950s, the stairway had fallen into disrepair. The metal rusted and the concrete cracked creating an unsafe environment for pedestrians. 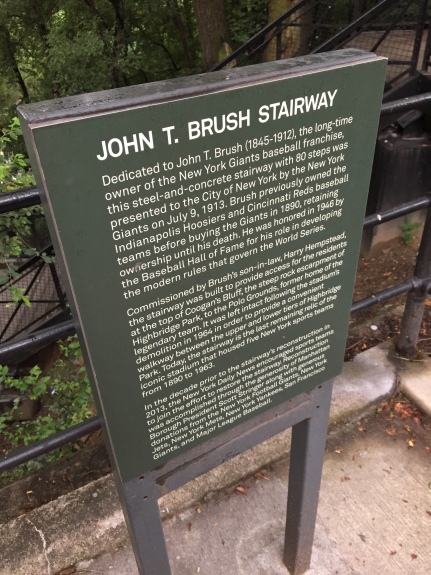 The City of New York, along with donations from every team that once played in the Polo Grounds and Major League Baseball, commemorated the stairway's centennial anniversary by completely reconstructing the structure. The project was completed and publicly unveiled in 2015. Yes, technically all that remains of the original stairway are the steel letters that read: The John T. Brush Stairway Presented by the New York Giants. I battled the gentle rain and climbed the stairway several times. 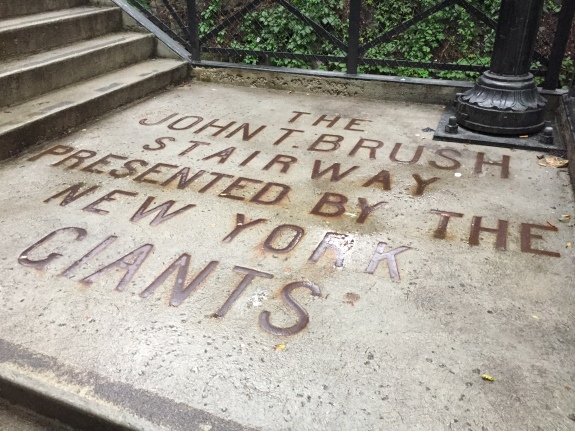 After experiencing the Brush Stairway, it was time to descend the steep stairs along 155th Street to make the journey to the former site of the Polo Grounds. All that remains of the legendary ballpark is a plaque that designates the approximate location of home plate. For just a few moments, I stood where Bobby Thomson belted a Ralph Branca pitch that sent broadcaster Russ Hodges into hysterics in 1951, and where Cleveland's Vic Wertz drilled a Don Liddle pitch that would famously die in Willie Mays' glove nearly 420 feet away in the 1954 World Series. 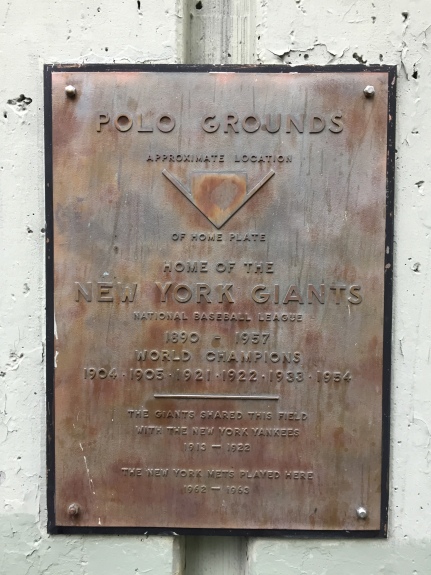 I was pleased to find a few moments to visit the former location of New York's Polo Grounds. While very little remains of the old ballpark, the next time my nephew asks if I visited the Polo Grounds, my answer will be slightly modified.

Historic Photos Courtesy of: ESPN and The New York Times