Beantown vs. City of Brotherly Love

The stage is set for Super Bowl LII. Football's premier game will feature the reigning champions, the New England Patriots (13-3), and the Philadelphia Eagles (13-3). While the Patriots are heavily favored to repeat as Super Bowl champions, they didn't blow the Jacksonville Jaguars out of the water during the AFC Championship Game (24-20). Conversely, the NFC Championship Game should have been competitive. Despite falling behind early, the Eagles eviscerated the Minnesota Vikings (38-7).

Boston and Philadelphia have a sparse history of battling each other for gridiron glory. This year's Super Bowl will provide a rematch from 13 years ago (Super Bowl XXXIX), the only time these franchises battled to claim the Vince Lombardi Trophy. Seeing the Patriots in pads and helmets on Super Bowl Sunday has reached a point of ubiquity. Super Bowl LII marks New England's record-setting 10th appearance, but only Philadelphia's third. With a win, the Patriots will match the Pittsburgh Steelers' total for most Super Bowl titles. The Patriots have won five of their nine appearances, and the Eagles are still seeking their first. But do these two cities have a history meeting in the World Series?

Perhaps it's difficult for today's fans to recall, but Boston and Philadelphia were once two-team baseball cities for decades with franchises spanning back to the formation of the National and American leagues. For two cities with rich baseball history, their teams only battled during the Fall Classic twice. And both times were more than one century ago in the Deadball Era.

Before playing in Milwaukee and Atlanta, the National League's Braves called Boston home (1871-1952). During that 81-year run, the team had many different monikers including: Beaneaters, Bees, Doves and more. And prior to relocating to Kansas City and Oakland, the American League's Athletics called Philadelphia home (1901-1954). The franchise has always been named the Athletics, or simply A's for short.

For two consecutive seasons, Boston and Philadelphia grappled for baseball supremacy. During those two World Series, all four teams in the two cities reached the Fall Classic, and both Series were over as quickly as they began.

1914 World Series: Boston Braves defeat Philadelphia Athletics (4-0)
In 1914, Boston's National League franchise earned the nickname "Miracle Braves" in response to a worst-to-first transformation between July and the end of the regular season. Entering play on July 18, the Braves sat at the bottom of an eight-team Senior Circuit with a 34-43 record and trailed the front-running New York Giants by 11 games. In their final 81 regular season games, the Braves finished strong winning 60 and dropping 21 en route to winning the franchise's first National League pennant in the World Series era. 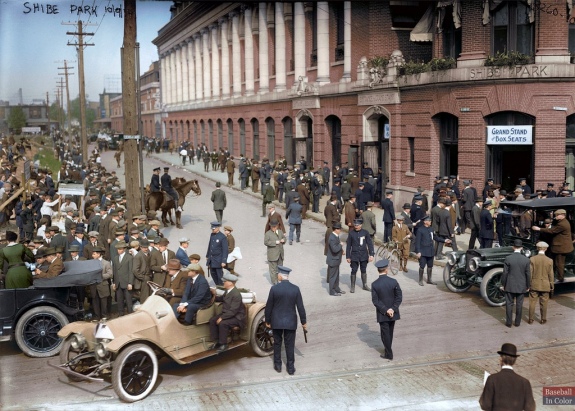 A colorized photo of Shibe Park before Game One of the 1914 World Series.

Connie Mack, Major League Baseball's most-winning manager (3,731 wins in 53 seasons), guided his Athletics along a different path to winning the franchise's fifth American League pennant. After reaching a tie for first place on May 29, the Athletics fell from the top spot for only two days in early June. Philadelphia concluded the regular season with a 99-53 record and a date in the World Series against the Boston Braves.

The Braves only needed four games to win the franchise's first World Series title. Boston won the first two games on the road at Shibe Park (7-1, 1-0), and the final two at home (5-4, 3-1). The Braves played their home games at two-year old Fenway Park instead of their own South End Grounds. Braves Field would not open its doors until the following season. Hank Gowdy set the pace by scoring three runs, compiling a 1.960 OPS, and belting the Series' lone home run. Only three pitchers toed the rubber for Boston. Bill James, Dick Rudolph and Lefty Tyler pitched 39 innings and compiled a 1.15 ERA.

For only the second time, the Philadelphia Athletics tasted defeat in the World Series. In 1905, they lost their first World Series to the New York Giants in five games. Philadelphia won three titles in four years over the Chicago Cubs (1910) and New York Giants (1911, 1913). John Franklin "Home Run" Baker, who hit nine home runs during the regular season, had a .669 OPS during the Series. He drove in two of the team's six runs during the four games. The Braves hitters hammered Game One starting pitcher, Charles Albert "Chief" Bender. During his 5 1/3 innings, surrendered six earned runs on eight hits to finish the World Series with 10.13 ERA.

1915 World Series: Boston Red Sox defeat Philadelphia Phillies (4-1)
One year later, Boston nearly played host to a crosstown Fall Classic. In an attempt to repeat as World Series champions, the Braves fell short and finished second in the eight-team National League, seven games behind the Philadelphia Phillies. Despite playing three fewer games than the Detroit Tigers, the Boston Red Sox needed every one of their 101 wins to claim the franchise's third American League pennant (1903, 1912, 1915). Aside from being tied following an Opening Day win against the Red Sox, the Philadelphia Athletics never held the top spot in the American League that season. The Athletics would not win another pennant until 1929. 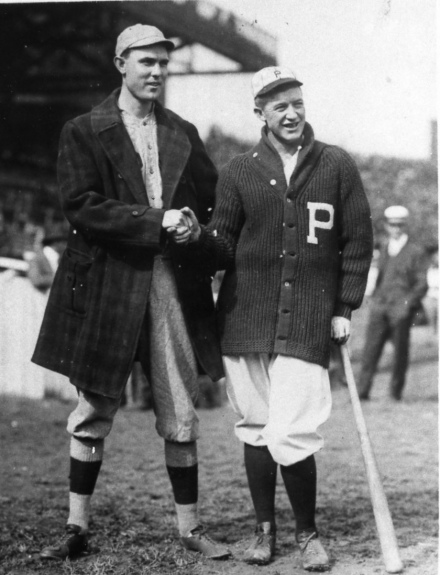 Starting pitchers Ernie Shore and Grover Cleveland Alexander shake hands prior to Game One of the 1915 World Series.

As first-time pennant winners, the Philadelphia Phillies grabbed a 3-1 Game One home victory at Baker Bowl. After that, the Series belonged to the Red Sox. Rube Foster singled home Larry Gardner during the top of the ninth inning of Game Two to even the Series, 1-1. In order to accommodate larger crowds in Boston, the Red Sox and Phillies played their games in the newly-opened Braves Field.

During Game Three, the Red Sox seized the Series lead when Duffy Lewis singled home Harry Hooper in the bottom of the ninth to win 2-1. Boston would win Game Four, 2-1, with Ernie Shore scattering seven hits and allowing one run. In Game Five, Harry Hooper's solo home run in the top of the ninth would prove to be the World Series clincher as Red Sox won, 5-4.

More than a century passed without the two cities meeting again in the World Series. As residents of Boston, the Braves would only win one more pennant in 1948, but lose the Series to the Cleveland Indians. The franchise would not win another World Series title until 1957 as the Milwaukee Braves. The Red Sox would repeat as champions in 1916, the win the franchise's fifth World Series title in 1918. Have you heard of the Curse of the Bambino? The Red Sox would not win another title until 2004.

In Philadelphia, the Athletics would not reach the postseason for more than a decade. But in 1929 and 1930, Connie Mack's club would win back-to-back World Series titles over the Chicago Cubs and St. Louis Cardinals respectively. Despite winning their third consecutive American League pennant in 1931, the Cardinals returned the favor during the World Series. The Athletics moved to Kansas City following the 1954 season, but they would not reach the postseason until 1971, the team's fourth season in Oakland. The Phillies would not win the franchise's second National League pennant until 1950, and would not win their first World Series until 1980.

Back to Football for a Moment 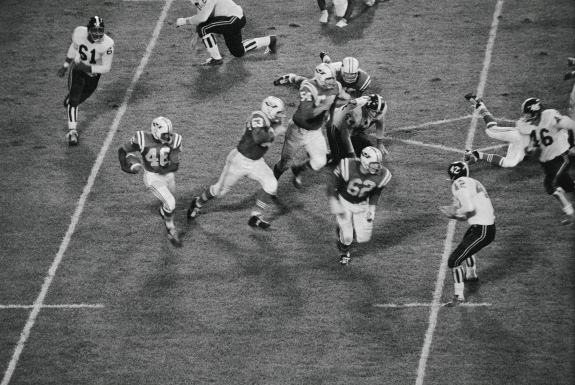 The Boston Patriots played their first game against the Denver Broncos at Nickerson Field on September 9, 1960. The Broncos won, 13-10. Halfback Larry Garran picks up five yards during the first quarter.

As a founding franchise of the American Football League (AFL), the New England Patriots (originally named the Boston Patriots) played their home games at Boston University's Nickerson Field from 1960 through 1962. Constructed on the site of the former Braves Field, Nickerson Field incorporated portions of the ballpark's entry gate and right field pavilion. From 1963 through 1968, the Patriots shared Fenway Park with the Boston Red Sox. 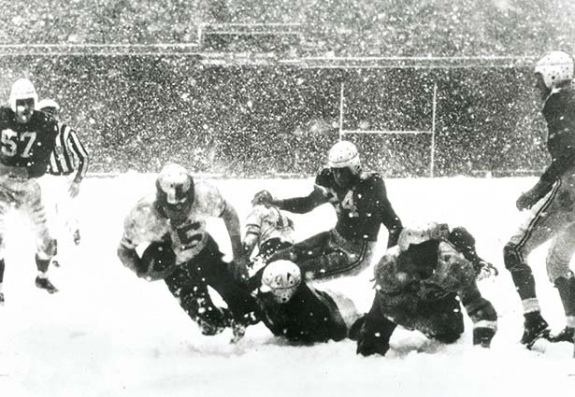 Halfback Steve Van Buren scores the only touchdown of the 1948 NFL Championship Game at Shibe Park with 1:05 left in regulation. The Philadelphia Eagles defeat the Chicago Cardinals, 7-0.

The Philadelphia Eagles joined the National Football League (NFL) in 1933 and played their home schedule at Baker Bowl through the 1935 season. After playing in Philadelphia's Municipal Stadium (1936-1939, 1941), the Eagles moved to Shibe Park (1940, 1942-1957). During their most of the team's tenure at Shibe Park (renamed Connie Mack Stadium in 1953), the Eagles shared the facility with the Athletics and Phillies. Eventually, the Eagles moved to the University of Pennsylvania's Franklin Field (1958-1970). From 1971 through 2002, the Eagles reunited with the Phillies and called the new multipurpose facility, Veterans Stadium home.