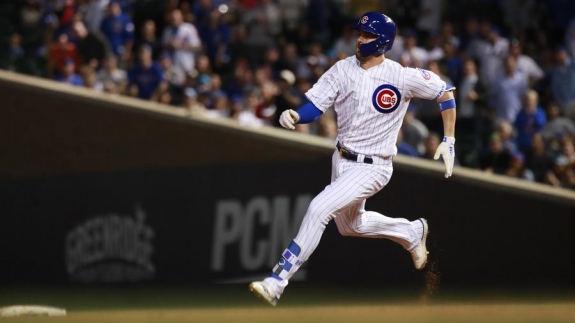 Chicago Cubs third baseman, Kris Bryant, tripled to lead off the sixth inning against the Colorado Rockies on Monday night.

Today is May 1, and the Chicago Cubs (16-10, .615) are in first place in the National League Central. Due to inclement weather at the start of the season, teams have played an unequal number of games through April. While the Cubs sit atop the division with 16 wins and a half-game lead, both the Pittsburgh Pirates (17-12, .586) and Milwaukee Brewers (17-13, .567) have won more games than the North Siders.

After an inconsistent start, the Cubs swept a four-game series against the Brewers and grabbed the first game against the Colorado Rockies (15-15, .500). The Cubs are currently enjoying a five-game winning streak and have finished 8-2 in their last 10 games.

Tonight, the Rockies will send 26-year-old Jon Gray (2-4, 5.79 ERA) to the Wrigley Field mound. Gray faced the Cubs at Colorado's Coors Field on April 20 and lasted five innings. chicDuring that start, he surrendered six earned runs and allowed eight hits, three walks and fanned one. The Cubs will answer with 28-year-old Kyle Hendricks (2-1, 3.10 ERA). Hendricks also faced Gray and the Rockies on April 20. He matched Gray's five innings and surrendered only three earned runs to record the victory. Hendricks allowed five hits, no free passes and struck out six Rockies.

Fun Fact: The last time I saw the Rockies and Cubs play was on Tuesday, July 28, 2015. The Rockies jumped on Cubs' starting pitcher, Dallas Beeler, and plated four runs during the first inning. That was more than enough as the Rockies defeated the Cubs at Wrigley Field, 7-2.