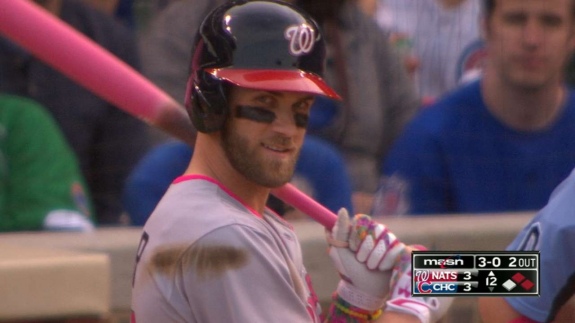 Wrigley Field, the ballpark that stands at the corner of Clark and Addison on Chicago's North Side, is synonymous with baseball history. The century-old ballpark has been the site of many famous baseball moments including Babe Ruth's alleged "Called Shot" during the 1932 World Series and Gabby Hartnett's "Homer in the Gloamin'" in 1938 to name a couple. When a baseball oddity occurs at Wrigley Field, something that has not happened in the last 100 years, it typically implied that the home team was on the receiving end in a negative way. On May 8, 2016, the Washington Nationals and Chicago Cubs accomplished a rare and historic feat.

With one out and one on in the top of the first, Washington Nationals right fielder Bryce Harper stepped to the plate. Cubs pitcher, Jake Arrieta, failed to find the strike zone and walked the National League's reigning Most Valuable Player on four pitches. Despite having runners on first and second with only one out, the Nationals failed to score.

When Harper stepped to the plate in the top of the third, there was one out. Third baseman Anthony Rendon was called out on a dropped third strike. Arrieta worked the count to 3-1, but with his fifth pitch, he walked Harper. First baseman Ryan Zimmerman hammered an 0-1 pitch for a double driving Harper home to give the Nationals an early 1-0 lead.

In the top of the fourth inning, the Nationals extended their lead to 2-0 when Rendon grounded into a bases-loaded fielder's choice (4-3) and plated catcher Wilson Ramos. Arrieta gave Harper a free pass on four pitches. Zimmerman struck out with the bases loaded. In his first three plate appearances, Harper walked each time.

After five innings and exactly 100 pitches, Arrieta left the game. Holding a 3-1 lead in the top of the sixth, Harper approached the plate for the fourth time with one out and Ben Revere on second base. Cubs reliever Trevor Cahill drilled Harper with his first pitch. Was this a coincidence? Unlikely.

Following the seventh-inning stretch, the Cubs evened the score when the reigning National League's Rookie of the Year, Kris Bryant, singled to score Cahill and Fowler.

With two outs in the top of the eighth inning, Cahill denied Harper the opportunity to hit a solo blast to give the Nationals a late lead and walked him on five pitches. After five plate appearances, Harper still did not have an official at-bat. The Cubs strategy worked as Zimmerman grounded out to first baseman Anthony Rizzo.

Since neither team scored in the final two regulation innings, the Nationals came up in the top of the 10th. With two on and two out, Bryce Harper approached the plate for the sixth time. Cubs reliever Adam Warren intentionally walked Harper to load the bases. Again, the strategy worked in the Cubs' favor. Zimmerman lined out to left field.

The score remained tied after 11 innings and Harper made his seventh plate appearance in the top of the 12th inning. With Revere on second and Rendon on first, Cubs reliever Justin Grimm issued another free pass to load the bases. Again, the strategy worked. Ryan Zimmerman grounded to third to end the rally.

With one out in the bottom of the 13th inning, Javier Baez deposited a Blake Treinen 2-2 pitch in the Wrigley Field bleachers to give the Cubs a 4-3 extra-innings win.

In a quirky, statistical oddity, Bryce Harper became the first major leaguer in the last 100 years to reach base seven times in a single game with recording an official at-bat.